What necklace with what neckline?

Xquisite Style
By Eniola Oyemolade On May 23, 2020 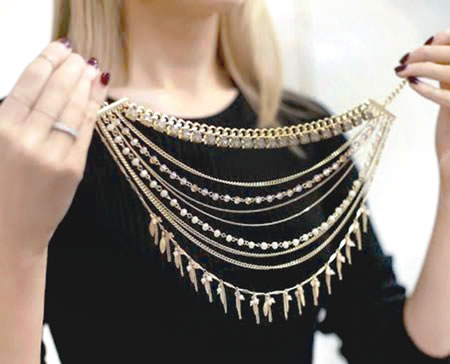 It can be quite difficult to find the right necklace to match your outfit or more specifically, your neckline. While it is advisable to explore one’s creativity, there are some rules to follow in order to achieve matching necklace with the neckline.

Necklace and neckline go hand in glove because they complement each other; some necklaces simply go better with certain necklines while others can confuse your appearance.

So, when buying necklaces, always keep in mind what cloth you plan to wear it with, shirt and necklace colour, makeup, hairstyle, occasion, facial structure and makeup.

V-neck: V-necks naturally pull people’s eyes to the cleavage area, so it is advisable that your necklace does the same. For a v-neck, pendants or princess necklaces which are about 18-20 inches long are the best options. This is because it will create the same V shape, especially a pendant with a sharper, triangle shape.

When wearing the pendant or princess necklace, it should end just about an inch above the neckline. Also, to create proportion, the wider the v-neck, the bigger the pendant should be.

Asymmetric necklace and round shapes will throw off the look and make you appear out of place.

Off the shoulder: The best option for an off the shoulder neckline are short necklaces such as short pendants and chokers as well as asymmetric necklaces and statement pieces.

Off the shoulder tops and dresses can, however, be either bandeau or bardot. Bandeaus are sleeveless and more of a young look and the necklines usually rest just above the cleavage while bardots are with sleeves and more of a sophisticated look. This is why long necklaces will work well with bardot necklines such as beaded necklaces and short necklaces will work well with bandeau style off the shoulder neckline.

Boatneck: Boatneck shirts and dresses stretch wide across the collarbone and have broad necklines. Elegant, minimalist necklaces, that won’t distract the eyes from the neckline, are the best. Also, princess necklaces that are either one or two strings, beads or pearls that rest past the neckline are ideal.

It is best to avoid flashy type of necklaces and those shorter that the neckline when wearing a boatneck.

Turtleneck: When it comes to turtlenecks, long necklaces like rope look great. The high collar of the turtleneck with the long necklaces draws the eyes down and lengthens the body. A rope necklace can rest as far as the belly button and they are often made with beads or chains.

Long necklaces are not the only option for turtlenecks, small, light pendants work as well.

Collared shirt or button down: These types of shirts are quite flexible in terms of what kind of necklaces you can pair with them; it all depends on how many buttons are done up. So, you can create completely different looks by simply buttoning in unique ways. Try and avoid necklaces that are too wide as there is not enough space for them.

In choosing necklaces as well, don’t be afraid to try out different combinations to find out what looks good with your existing wardrobe. Also, consider buying an adjustable necklace and always be creative. 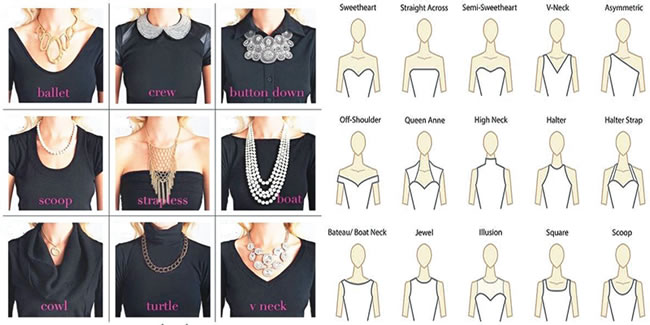 History of Abacha’s theft is being rewritten before our eyes

The commandments of face cleansing