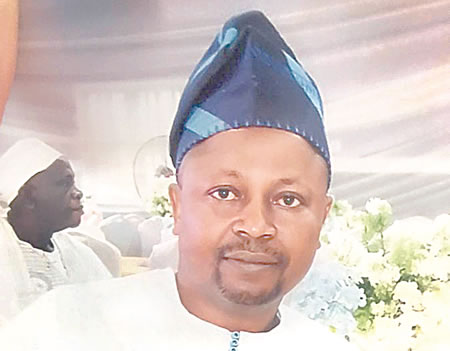 Alhaji Lateef Abdulraheem Adebayo, an agriculture enthusiast, produce merchant and CEO of Tolanlat Ventures Enterprises in Lagos, in this interview speaks on why the Federal Government should make Ogbomoso in Oyo State the hub of cashew business in Nigeria as one of the ways of diverting the economy from oil, among other issues.

After I graduated from school, I was encouraged to take up agriculture as a cashew merchant by my mentor, Alhaji Muritala Adeniji who taught me the rudiments of the cashew business. And since I started it, I have never had cause to regret. Alhaji Adeniji is a mentor per excellence, a kind of person who always wants others to rise, and is never self-centered. Alhaji Muritala Adeniji can pass as the chief promoter of cashew business in Ogbomoso despite the fact that he is not from Ogbomoso. He is still also into cashew and cocoa businesses with his office at Aswani Isolo industrial estate in Lagos. In fact, I make bold to say that his efforts have lifted farmers and others in the cashew value chain in Nigeria and beyond. His effort at bringing the government to realise the huge potential in cash crops found in Ogbomoso is highly commendable. Through his efforts cashew business has gained recognition in Nigeria and all over the world. Alhaji Adeniji can never be forgotten because of his contributions and historic achievements to his credit. Alhaji Adeniji has used his position, wealth of experience and connection to lift many people up in Nigeria most especially the youths that are hardworking and enterprising and who are ready to work.

Like every other endeavour, what are some of the challenges you are facing in this area of agro-business?

Our major challenge in the cashew business is that there is no regulated price of cashew in the market and I think the only solution is for the Federal Government to try and establish processing plants especially in Ogbomoso, Oyo State. In Ogbomoso, we produce the best quality cashew in Africa and with a processing plant, the farmers, the dealers, the community and indeed the government would be the better for it. The Indians and Chinese have been taking advantage of the fact that we don’t have processing factories at the areas of production to exploit Nigerians. For instance, they buy our products at very low prices only for them to sell the finished or processed products at almost ten times the amount they bought. I don’t think that this is good enough. So if the federal government under President Muhammadu Buhari can, as a matter of urgency, establish processing factories, it will be better for us in the country and this will even serve as another source of revenue generation for the nation.

Secondly, we also face challenges in export lifting of our products, and this has been on for some time. Lifting of cashew products to other countries of the world from Apapa Port in Lagos has been a serious issue and this should not be. We strongly wish that President Buhari and the Federal Government through the relevant ministries and agencies should intervene more because agriculture and its products are obviously the better alternative to oil, which has already suffered a serious setback as a result of the COVID-19 pandemic. It is also imperative that we educate our customers from especially India and China that Oyo State is in Nigeria. They should know that the state is a federating unit and part and parcel of Nigeria and not Benin Republic, because that is the thinking of many of our Chinese and Indian customers.

The coronavirus pandemic has affected everything in the world and it must have also impacted the agribusiness. How has it affected you and what is your message regarding COVID-19 pandemic?

Firstly I want people to know that COVID-19 is real and it’s deadly. Therefore, everyone must try and take to the precautionary measures that have been laid down by the World Health Organisation (WHO), the federal government as well as medical experts. We must try and wash our hands with warm water as often as we can and also encourage people to embrace regular usage of hand-sanitizers and face mask. They should also observe social distancing in public places and abstinence from handshake among others.

Secondly, I believe what we are witnessing now is a pointer to the fact that God is angry with us and he want us to come back to Him by forsaking our sins. Now that COVID-19 has badly affected our economy, the Federal Government and every citizen of Nigeria must try and look beyond oil economy by embracing agriculture. All over the world, sins have far removed us from God and the word of God says the wages of sin is death. So, with what has just happened (I mean COVID-19 pandemic) we should now forsake our sins and quickly return to God. Some people even goes to the extent of eating human flesh as if they are eating/animal which are all serious sins before our almighty creator. So, we should all retrace our step back and come nearer to God so that calamity can be far away from us. So, it is my belief that COVID-19 pandemic didn’t just come, God knows about it and He wants to use as punishment to show that he is angry with us as a result of our unrepentant sins.

To your question, COVID-19 has affected everything and that includes our business, because there are no movements and it means we all are praying that God should have mercy on us and remove the virus so that we can resume our normal life.

What necklace with what neckline?

Would you marry someone who earns significantly lesser/higher than you?

Removing traditional rulers from local govt administration should be revisited —…