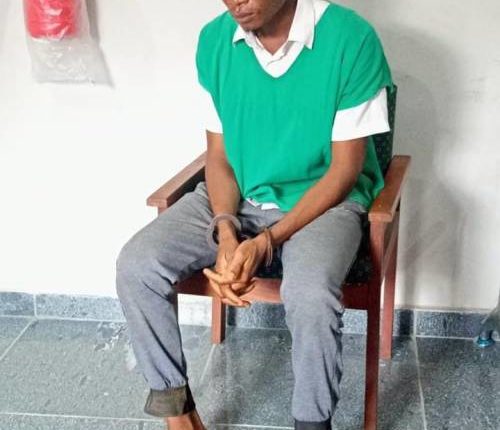 A Federal High Court sitting in Yenagoa, the Bayelsa State Capital, has convicted Yunusa Dahiru for the abduction of 14-year-old Ese Oruru and getting her pregnant in the process.

The presiding judge, Justice Jane Inyang, sentenced Dahiru to 26 years imprisonment in a judgment she delivered on Thursday.

Dahiru abducted Ese from her family house at Opolo area of Yenagoa on August 12, 2015, and took her to his home state, Kano, where he converted her into Islam.

The minor, who was rescued by the police in February 2016 and brought back to Yenagoa in early March, gave birth to a baby girl in May 2016.

On March 8, 2016, Dahiru was arraigned before the Federal High Court on a five-count charge bordering on criminal abduction, illicit intercourse, sexual exploitation and unlawful carnal knowledge of a minor.

He had pleaded not guilty to the charge which was read to him in pidgin English, but on March 21, the first trial judge, Justice Aliya Nganjiwa, granted him bail in the sum of N3 million with two sureties in like sum.

Justice Inyang in her ruling acquitted the accused on count one but found him guilty on counts two, three, four and five.

She, therefore, sentenced Dahiru to five years in prison on count two and seven years each for counts three, four and five and that they would run consecutively.

The judge also held that the failure of the defence team to produce one Abdullahi Zarafat was also “fatal to the defence.”

Counsel to the defendant, Kayode Olaosebikan, pleaded for the judge to temper justice with mercy and give liberal sentence to the accused.

Dahiru, who was in his prison attire, emerged from the court after the judgment with tears in his eyes.

Olaosebikan, in an interview with journalists, said that they were not comfortable with the aspect of ruling that the sentence should run consecutively.

He said, “Though I’m not comfortable with the part of the judgment that said the sentence should run consecutively, we had some challenges during the course of trial.

“There were six other witnesses we needed to have called in this matter, two of them are resident here (in Bayelsa), four of them in Kano, but none of them was available.”

Olaosebikan said that his client was at liberty to appeal the judgment, especially because part of it ruled that the sentence should run consecutively.

In his reaction, the prosecution counsel, Samuel Njoku, a Deputy Superintendent of Police from the Force Headquarters, expressed delight that justice had been served and described the judgment as “naked and simple justice that has been done today.”

A former vice-chairperson of International Federation of Women Lawyers (FIDA) in Bayelsa State, Deme Debra Pamosoo, who appeared as a private legal practitioner holding watching brief in the case, said the judgment would serve as a deterrent to other paedophiles.

She said, “The judgment has sent a strong message to serve as a deterrent to paedophiles of underaged children. The judiciary is fair in the judgment given.”

The father of the victim, Charles Oruru, said he was very happy that the five-year case had ended in their favour.

He said, “I’m very happy and grateful because I see that all my suffering is not in vain. This case will serve as a deterrent to others who traffic people’s children. I thank God that truth has prevailed. I and my family are very happy.”