Borderless
By Sulaimon Olanrewaju On May 10, 2020 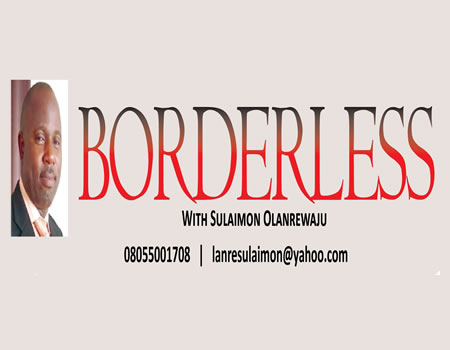 During his almost five-year hold on the country, late Head of State, General Sani Abacha, stole oodles of money stashed away in the United States of America, the United Kingdom, Switzerland, Jersey Island, a British Crown dependency located near the coast of Normandy in France; and Liechtenstein, a German-speaking micro-state situated in the Alps between Austria and Switzerland. While the whole country was not in doubt about the dark-goggled General being gifted with light fingers, none could have imagined the extent of the larceny perpetrated by him. His death later revealed the depth of his greed and the agitation for the return of the nation’s money kept by him offshore in private accounts commenced immediately.

Abacha is a former head of state who Nigerians love to demonise. He is usually pilloried as a villainous leader who was prodigious in wastefulness and wickedness. It was under Abacha that Nigeria resorted to permanent importation of petroleum products, as all the refineries packed up as a consequent of government neglect. Abacha incarcerated Chief Moshood Abiola, winner of the June 12, 1993 presidential election, while his goons killed Kudirat, Abiola’s vocal wife. Abacha ordered the execution of Ken Saro-Wiwa and others described as ‘the Ogoni Nine’, a group of environmentalists protesting against the injurious activities of the government and oil companies in Ogoniland. Abacha’s henchmen descended heavily on pro-democracy activists and many of them had to scamper out of the country to stay alive. State-sponsored terrorism became the order of the day with bomb blasts occurring all over the country. One of such bomb explosions resulted in the death of Bagauda Kaltho in January 1996.

So, the apple-loving General deserves every form of opprobrium Nigerians choose to heap on him because his atrocities were both legionary and legendary.

But if Abacha who stole over $5billion from the treasury is called a rogue, pray, what do we call those who recovered and squandered same? What can we point to as the fruit of the repatriated looted funds? Where are the refineries built with the money? Where are the airports? Where are the hospitals? Where are the roads? Where are the power plants? So, Nigerians should ask General Abdulsalami, Chief Obasanjo, Alhaji Umaru Yar’Adua, Dr Goodluck Jonathan, and President Muhammadu Buhari what they did with the share of the Abacha loot recovered during their tenure. Unfortunately, there is nothing to show for recovering the looted fund. Getting back the money has not improved our lot as a nation. The recovered funds were either re-looted or squandered.

The United States was so peeved at the level of the nation’s mismanagement of the Abacha loot that in February this year it threatened to ask Nigeria to refund the $308 million it repatriated earlier in the year if it was stolen. This is an insult from a nation to another! Imagine being threatened over your right to deploy that which is yours the way you want.

But the USA was not mistaken! It knew the fate of the earlier repatriated funds. The Nigerian government also knew that the threat was real. So, it announced that the Abacha loot which was returned in February would be used to feed the nation’s poor while the recently released $311million would be expended on Mambilla power project, the Second River Niger Bridge, the Lagos-Ibadan express road and a few other projects. But weren’t there provisions for these projects in the 2020 budget? Does the government mean that the execution of these projects would have been stalled if the stolen money had not been repatriated?

Truth be told, Abacha must be a saint of sort compared with those who succeeded him. In the case of Abacha, though we could not see any project the former head of state executed, at least the funds meant for the projects were retrieved from where they were kept. But in the case of his successors, neither the funds nor the projects are anywhere to be seen. Abacha’s successors have so perfected the art of looting that it is so difficult to trace stolen money to them. That means when it comes to looting and keeping, they are better than Abacha by far!

This then brings to light what President Muhammadu Buhari meant when he said Abacha didn’t steal, he sure was comparing the magnitude of the late General’s misdemeanor to that of his successors, himself inclusive!

Nigeria: Living in the past, killing the future