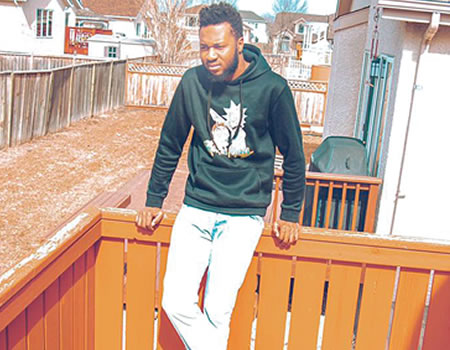 In an industry where due credits are not usually given to music producers,  Anthony-Wisdom Okoro, one of Nigeria’s next generation of music producers who does not only create music but also produces  unique tune to the songs he produces, seems to be changing the narrative.

Speaking to R in an interview particularly on his growing up in the popular city of Lagos, Anthony said he adapted really fast to the music world. At the age of 16, he said he was already able to programme music digitally.

When asked how he hopes to build his brand and reach a wider audience, he said:”When I started this music thing, I wasn’t thinking of building a brand, it was just a hobby but as of now, most of the songs I’ve produced have a voice tag ‘It’s the Man’ and that has rapidly become a necessity for my record label because they want to be associated with ‘the brand’.”

Anthony’s father is a lawyer and his mother was a teacher and they were just like an average Nigerian family. According to Anthony, they have been supportive of his passion for music and his ambitions to become a music producer. He is affiliated to all genres of music but has a stronger knowledge of ‘Trap and hip-hop’ music.

Speaking on his legacy, Anthony ‘The Man’ said he hopes his name would be remembered for good as he wishes to set the new standard for creating good music,

Anthony-Wisdom is currently studying Electrical Engineering at Dalhousie University, Canada and has used his presence in Canada as an opportunity to work with foreign artistes like Dopboi, Tony Driz, Ziad.

In Nigeria, he has produced songs for Akin Music, Danlil, Dimples Shuga and Jesse Flames. It is certain he would become highly sought for in the Nigerian music industry.

‘I create magic with erotica’

Wizkid to headline 2021 Afrochella’s ‘Made in Africa’

BUJU: Nothing can stop me now