How OBJ gave me my nickname —Labinjo

•Says I have over 500 shoes, use special perfumes 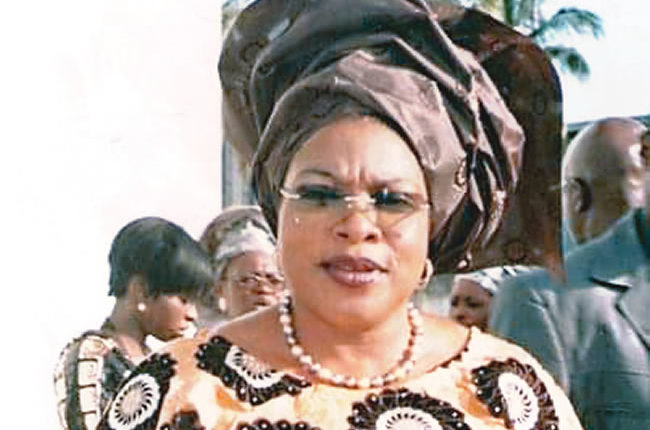 Popularly known as Mama Diaspora, Chief (Mrs) Amina Temitope Labinjo, a delegate at Nigeria’s National Conference in 2014,served as president of Nigerians in Diaspora and Ambassador of Goodwill for US states of Arkansas and Maryland. SEGUN KASALI had a dialogue with her.

How would you describe your father, the late Hector Labinjo and mother, Elizabeth Labinjo of Ita Garawu Lagos Island?

My father was very blessed. I cannot remember the number of people my father sponsored up to university level because God used him for so many of them. So, it had been in my DNA. Google is saying we used our influence and affluence to empower the underprivileged in our family. So, my father was a millionaire because that is what they called people like him then, unlike now that people talk of billionaires. I have never seen anyone so humble as my late mother.

What are the lessons from them?

(Laughs). Yes, my late father was my bank manager. I became very blessed at the tender age of 28. I recall he used to say I am a replica of his mother. I too believe that I was his mother just as he said. His mother died at the age of 50. So, he sees me as her reincarnation. My dad would say “Ise l’ase jeun. Owo l’ase la”. If you want to be a millionaire, you have to go into business. I was very blessed at that age because my late father was a millionaire that people call billionaire these days. So, he spoilt me with money but never allowed it get into my head because of his words of wisdom “omo to ba mo owo na, a mo ise se” and so many others.

So, his words of wisdom were helpful in preventing you from derailing?

Yes, they did. People of my age then would either take to illegal business or get themselves involved with men. But, I did not need to beg any man for money because I could get it from my dad. That was the wisest thing my late father, did. With that, he made me believe in being independent. What I don’t have, I don’t miss. The state of satisfaction is the best behaviour. That also helped me when I left Nigeria after participating in the June 12 protests.

Tell us about it.

The horrific experience during the oppressive military regime in Nigeria informed my migration to the United States of America in 1996. Then, I was appointed as the Special Assistant to the Deputy Governor of Lagos State, Alhaja Sinatu Aderoju Ojukutu. I followed her on the campaign trail and when the party won, she asked me if I would not mind to be her personal assistant and I told her I did not. So, I took care of most of her personal things. So, when the unfortunate June 12 came, we all left for the United States. I was part of the NADECO. We fought for this democracy. Some of us sacrificed our lives and I lost virtually everything that I owned in Nigeria.

Yeah, this was due to the fact that I left unannounced and unprepared. But, you see God told me one day that wherever I am on the face of the earth I will always excel.

What about the dark tunnel while in America?

It was really tough. Do you know what it means to have brilliant kids and be poor? I had been there. You may be a billionaire in Nigeria but you are a nobody when you get to another man’s land. So, they said stop day-dreaming and get real. So, I got real. But because I was a political asylum seeker, the American government adopted me and my children. That is the reason I don’t joke with America even up till today. So, I was alone with my God and my children. But, I have to give credit to my late father.

Yes. This was because it was his words of wisdom that spurred me to buying lands in Lagos while I was back in Nigeria before the crisis that later helped me when I was in America where there was no source of income for me for a while. This was because at the tender age that I had money, I bought parcels of land in Lekki and other places. So, when I sold one of my parcels of land in Lekki for N350,000 then, I was so happy. So, I was selling the land in Nigeria and using the proceeds to take care of my children in America. But grace found me when the American government gave me my papers because they saw everything about my life and they were satisfied. You know America is fact and figures, not facade. So, I was a life insurance agent. Let me say this- the suffering Nigeria goes through was what made me in America.

When I go to what we called “the kitchen table”, I sell insurance to the union, who are generally called the blue collar. You know what I would tell them? I would say consider yourself lucky because if you save 25 dollars of your money every day, your future is guaranteed just like my late grandfather told me: “save the pennies and the pounds will take care of itself.” You will eventually send your kids to the best university your money can afford.

Nigerians are not utilizing insurance policies in a proper way. There is something they call mutual funds, stocks and life insurance. If you die today, there would be money for your children to continue their lives. If you take all the pennies, it would take care of your children’s education tomorrow. So, I was passionate about the insurance policy I was selling to them and I was making about 12,000 dollars per month. And because I knew where I was coming from, I gave my children the best education. Two of my children graduated from Harvard, while others graduated from topnotch institutions over there. So, those were the things American government was watching about me.

I recall they told me that they were going to write a story about me with the headline “Immigrant woman that came to the US and became successful”. Thankfully, my children were good kids because they have seen suffering in the transition to America. Even though they were rich kids in Nigeria, they had to start all over again when we came to America. But there was something I did.

I spent a lot of money on accommodation in the rich neighbourhood because there are good schools there. But, trust me, I won’t come back home until night having left the house from 10:00 am. I don’t have Saturday and Sunday. I was a hustler because I always remember that I am their father and their mother. Rich neighbourhoods are expensive. So, we were able to rent a two-bedroom apartment. My boys are in one-room while the girls and I were in the other room. The four of us would sleep on the bed. I recall my children didn’t have a dining table. They laid on the floor when they were doing their home work. While I was in the US, there was no father, no mother. I called my father and my mother and they said: You are from a rich family, right? Okay o don’t go and work in the cold. Who will feed your children? We were hustling over there. I know what it is to be poor.

This experience made you so passionate about helping the poor?

Yes, my dear brother. When I see any under-privileged person, I see myself in them because I had been there. This is why I am passionate about helping those who are poor because if I had seen someone to help me while I was in distress, I would not have suffered that much. Whenever people tell me their stories, I would be crying inside me. But, I thank the Lord that the fame came.

At what point was this?

The American government gave me the key to the City of Little Rock. And you know America does her things on merit. And this was because of my documentation over there. You can’t believe I am a Nigerian. So, I usually add the names of Dangote, Akinyemi, Kwankwaso and other prominent Nigerians to the award list whenever I am being called for award in the United States.  It was then President Goodluck Jonathan got to know me. So, he was like, if she can be that connected, let her be my coordinator for my support group, and that was brought me back into politics again. At this point, what else can I say than to just keep praising the almighty God that the name “Mama Diaspora” became a household name and a key to many doors of opportunity both home and abroad.

How did you come about this name?

What is that thing you can’t do without in your wardrobe?

I am a shoe freak. I have over 500 pairs of shoes. That is my own as a woman, just as other women have theirs. I don’t wear clothes twice and I love perfumes. I like to enter somewhere and everybody would look back to appreciate my perfume.

The forces at work/The capitalist system

How is cryptocurrency affected by global political outlook?

My life about impact, not amassing resources — Adeyemi-Showunmi