Agriculture
By Nurudeen Alimi On May 5, 2020 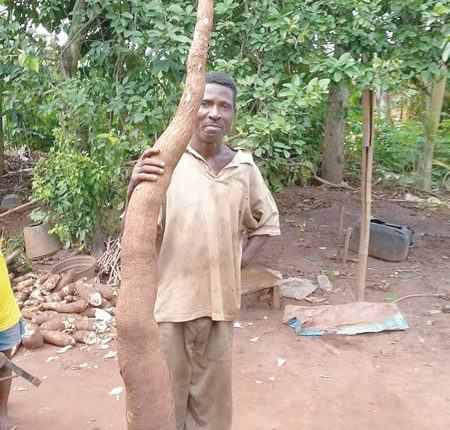 A farmer, Mr. Chuwudumebi Innocent Nwogwonuwe of Onitcha-Okpe Quarters, Ubulu-Uku, in Aniocha South Local Government Area of Delta State, Nigeria, has harvested what is considered the largest tuber of Cassava in the world.

The cassava tuber which is named scientifically as Manihot Esculenta measures over 10 feet in length and was said to weighed up to 90.8 kilograms. T

According to the information gathered by the Nigerian Tribune, it was revealed that the cassava was harvested from a farmland where no inorganic fertliser was added. The towering monster cassava became a source of tousist attraction as people posed to take photos of it.

The former record holding cassava tuber was found in August, 2012 in Big Island of Hawaii. Volunteers and students at the farm of the University of the Nations found what they described as one of the biggest cassava roots they have ever seen. It weighed up to 83.6kg.

Leading With Presence — 2
COVID-19 has changed the world and the way we do things. The changes it has brought upon humanity will be our new norm for some time to come. It is as if it was what the world needed to remind us that the only constant thing about life is change. Social distancing means we make less physical contacts… Read full story

Things That Won’t Change Post COVID-19 (Part 3)
This is the third piece I am penning on this life-changing subject that has started helping a lot of people in Nigeria and beyond. So far, I have written on three non-negotiable values that will not change post COVID-19: vision, loyalty and confidentiality. The fourth value I am writing on is that of assiduousness and… Read full story

Reflections On The Post-Coronavirus International Economic Order
THE novel coronavirus pandemic has been the biggest global economic shock since the 1929 Wall Street Crash. In fact, its ramifications might be even bigger, given that, unlike the 1929 crash, our world is today an integrated global marketplace… Read full story