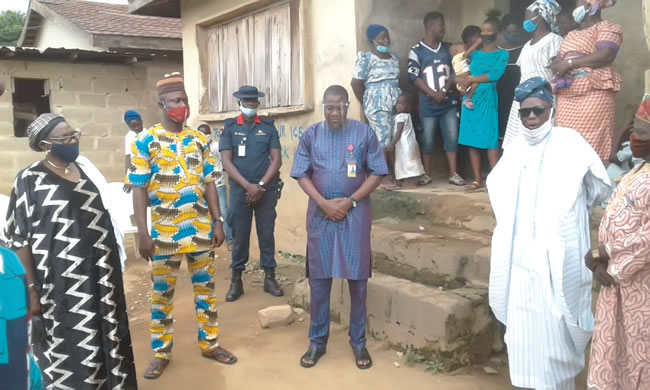 Eyin Grammar Community in Ibadan South East Local Government Area of Oyo state is reputed for its substantial population and peaceful co-existence among residents. Since the coronavirus pandemic has shut public schools, the axis has enjoyed more serenity, which used to be punctured by traffic of students when schools were open.

Nigerian Tribune gathered that the governor of Oyo State, Seyi Makinde, recently led members of his executive council to inaugurate a health centre refurbished and reequiped by the state government an occasion which enlivened the residents who had long looked forward to having the facility to service their medical needs.

However, residents of the community woke up to the gruesome news that one of them, Lanre Kazeem, had hanged himself inside his room. Following the news, the entire community rose and took a step to ensure the area is spared of such incidents any further.

Traditional cleansing rites were performed as required by the customs of the people after which the corpse was taken to the mortuary at the General Hospital, Adeoyo. It was learnt that the deceased was an indigene of Abeokuta, the Ogun State capital, and an employee of a private company but with no known friends or relations.

In his reaction, the general chairman, Eyin Grammar Community Association, Lateef Adegoke, expressed dismay at the incident, describing it as shocking and strange in the history of the community, saying “God does not permit his creatures to willingly take their lives under any circumstance.”

The incident attracted the attention of the state governor who was said to have sent his Special Adviser on Tourism and Culture, Ademola Akeem Ige, to commiserate with the leadership and people of the community.

Ige said that apart from the fact that it is absolutely against the law for anybody, irrespective of the condition he or she might be facing, to commit suicide, the two holy books, the Bible and the Quran, also forbid such an act, stressing that there is no condition that is insurmountable when there is life.

He said, “Committing suicide is not the best option, no matter the condition one is facing. The law does not support this. So, I want to admonish our people, especially the youths, to know that the life of every individual is precious to this government and therefore, they should be mindful of any action they are taking.

“Governor Seyi Makinde expressed his heartfelt condolence to you in this community and wants you to always be vigilant and be your brother’s keeper. Don’t feel unconcerned about the plight of your neighbours and no matter the situation, always believe that there will definitely be solution.

“I want you to learn a lesson from the lives of politicians, especially that of our governor who had contested for an election two times before and failed but today, he is the governor of Oyo State. This was made possible because he did not give up. The same thing applies to all of us not to give up but believe that one day there will be a solution to our individual challenges.”

In her remarks, the caretaker chairperson of Ibadan South Local Community Development Area, Kehinde Eboda, appreciated Governor Makinde for being a pro-active, responsible and responsive leader, and urged anybody that finds themselves in any difficult situation to share their burden with others before taking any unpalatable decision.

Others who accompanied Ige to the community included the Peoples Democratic Party (PDP) chairman in Ibadan South East Local Government Area, Sulaiman Adesina, Alhaji Adeoti and some leaders of the party in the said local government area.

The community leader thanked the governor, recalling “upon hearing about the incident of the man that committed suicide, he sent a delegation to convey his condolence message to us. The governor has displayed that his government his responsive, responsible and a listening one.”