Agriculture
By Collins Nnabuife|Abuja On Apr 27, 2021 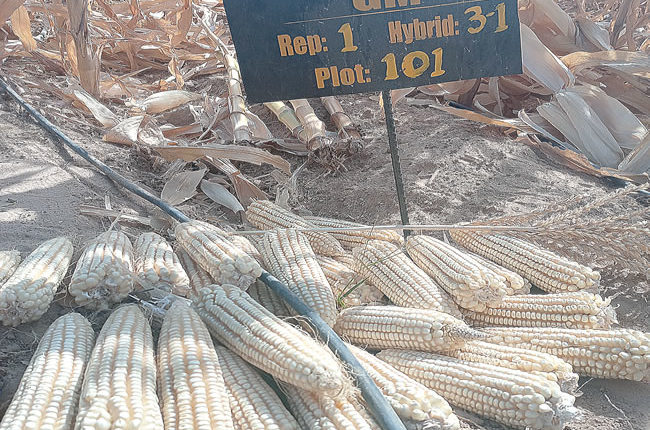 Nigeria is currently in search of a maize variety that can fight the ravaging Fall Armyworm and also withstand some climatic conditions such as drought.

TELA maize project builds on progress made from breeding work under the Water Efficient Maize for Africa (WEMA).

In 2019, the TELA maize project expanded into Nigeria, presenting a unique opportunity for Nigeria’s scientists, researchers, and farmers to benefit from transgenic drought-tolerant and insect-protected maize varieties. In addition to Nigeria, the TELA Maize Project is working with governments in six other African countries: Ethiopia, Kenya, Mozambique, South Africa, Tanzania, and Uganda – to deliver the new TELA maize varieties to farmers.

It started on the continent in 2018 and builds on 10 years of excellent conventional breeding work on the WEMA Project that was formed in 2008 in response to a growing call by African farmers, leaders, and scientists to address the devastating effects of drought.

The project is working towards the commercialization of transgenic drought-tolerant and insect-protected maize varieties to enhance food security in sub-Saharan Africa.

During the harvest of the third Confined Field Trial (CFT) at the trial site in Ahmadu Bello University, Zaria, the Director General of National Biotechnology Development Agency (NABDA) Professor Abdullahi Mustapha said with the adoption of TELA maize, Nigeria will be self sufficient in maize production.

“When we adopt this TELA maize, it means Nigeria will be self-sufficient in maize production which will also improve the economy of the country”, he said.

Professor Adamu Rabiu the Principal Investigator for TELA Maize said the project comprises of three trials and it is expected that the maize variety would be available for cultivation by 2022.

“It (TELA maize project) is composed of three major trial, the Bt hybrids to resist farm army worm and drought, the second trial is those raw material we are trying to breed that are resistant to stem borer, the third trial is those materials we are evaluating that could do well in the presence of drought under the optimum, giving that you have drought, insect pest, try to manage them.

“We are hoping that those hybrids will be available to farmers by the end of 2022, these hybrids under our field condition last year produced up to 8 tons per hectare, most of Nigerian farms, is not more than to 2.5 to 3 tons per hectare.

“Most of our varieties here under onfarm we are able to record up to 8 tons per hectare, this is quite a commendable achievement, from 2 to 3 tons we are recording 8 tons. This will go a long way in boosting the productivity of maize in Nigeria and reduce the food insecurity we are facing.

“Before now, nigerian maize yields are less than 3 tons per hectare because of the nature of the varieties we use, this variety we are working on can produce up to 8 tons per hectare, this more than double of what we got in our farms.

“This will translate into more income, food security and boost the economy. Nigeria produces only 12 million metric tonnes of maize, the country requires at least 18 million, it means there is a deficit of almost 6 million, we need to bridge that deficit, we can do this by increasing the land areas under cultivation or produce high yielding varieties”, Professor Rabiu explained.

He said Fall Armyworm could cost 80 percent yield losses and if not properly managed, as well as drought where the farmer not get any yield is not addressed.

Professor Rabiu said these two challenges are militating against production and increase in productivity in maize in Nigeria.

He noted that this project is aimed at alleviating these two major constraint of insect pest that affect maize and drought.

“We are doing this trial for the third time, we started march last year, we did the first trial under dry season, we did the second one in June, and the third one in November 2020 to this April”, he said.

“This trial is under confinement because the crop has not been regulated, after this we will go outside the confinement which is on-farm field trials outside Zaria.

He said the trial would be to try those hybrids that have perform well, test and validate them to show that what was received at CFT.

The Lead Trial and Pipeline Testing, Dr Muhyideen Oyekunle explained that why the trial is confined is because they are dealing with a genetically modified organism which needs approval to be taken to farmers field.

“Until we get approval for environmental release, that is when we can take this product out of the confinement through farmers field”, he noted.

He further explained that “last two years, Nigeria joined the TELA maize project, there are 7 other countries in Africa that are under this project, so the project is trying to address two major challenges that is affecting maize production and that is insect pest especially the stem borer as well as the fall army worm.

“The other component is the abiotic stress like drought. The TELA actually means protection against insects and drought.

“We established three different experiments to look at the efficacy of the drought tolerant gene as well as the BT gene in the maize. While TELA is trying to address two major constraint ,the stem borer and drought.

“Drought can occur at any stage of crop development and the effect of drought is severe, especially at flowering and grain filling stage, from the last two trials that we have conducted.

“We have recorded yield advantage of 17 percent of BT over non BT, with this level of observation we are looking at, the level will definitely which will be more than 17 percent because we invested in it thrice to actually look at the efficacy of the gene in the maize.

“After harvest, we are going to analyze the data and prepare document to get approval for environmental release, we are going to submit the dossier to National Biosafety Management Agency (NBMA) to review and once we get approval that we can come out of the confinement, then we can now have a national performing trial and along the line when we started the TELA, we also evaluated products that have been developed under the WEMA project.

She said Fall Armyworm has devastated maize farming in Nigeria and farmers suffering, but when the maize variety is ready, and get to farmers, they will smile.

Dr Gidado further said with the increase in yield, their (farmers) livelihood will be enhanced and they will also get more money.

“We have to follow due process because the data generated from here will be sent to NBMA, they will look at the data and it has to be circulated not just within Nigeria but also the international arena as well to be sure that safety is not compromised because the agency is saddled with the responsibility that Nigerians have access to safe food products or crops that have been developed using this technology”.

She explained that “there has been misinformation on the product of genetically modified worldwide, not just in Nigeria, but then, biosafety regulation ensures and gives confidence to people because they have to look at the data

“It is the data that will tell that the crop is safe for both human and animal consumption, the environment. It will take some months to get that approval for environmental release and after that, the national varietal release committee and that’s when national performance trial will start, this is for farmers to try it on their farms to see and experience the benefits”.

Nigeria may experience worse hike in food prices beyond 2021

‘How snail farming can give 300% profit on investment’