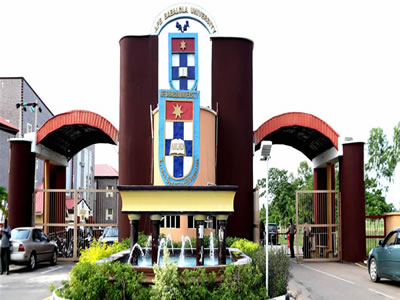 The management of Afe Babalola University (ABUAD), has announced that it has entered into a partnership with the Akin Fadeyi Foundation (AFF) to use its Flagit App in its battle against the menace of sexual-based violence, sexual offences and cyberspace criminality in general.

The President and Chancellor as well as the management of ABUAD in a letter signed by Babatunde M. Wahab, the institution’s Student Affairs Officer and Olumide Olugbemi-Gabriel, PhD, said the institution recognises and salute the tremendous efforts of AFF and Flagit App in containing the menace of sexual-based violence, sexual offences and cyberspace criminality in general.

ABUAD added that “the onerous task you perform as well as the great efforts which you put into it have been experienced first-hand with your recent involvement in cases of coordinated cyberbullying attacks launched by some unscrupulous persons against some female students of our institution.

“We also wish to commend your fearlessness and tenacity of purpose in not only providing the necessary guidance to the victims of that nefarious attacks but also working with us to commence the process of redress through the relevant security agencies,” the institution said.

In his remarks, the founder, Akin Fadeyi Foundation and the FlagIt App initiative, Mr Akin Fadeyi, affirmed that “this is a very exciting development. Since we launched the FlagIt App as a mobile application to report corruption, we’ve been uncovering the nefarious activities of Rapists and cyberbullies in our society. This has been accompanied by such audacious impudence of trading with or threatening to expose explicit pictures of victims who attempt to resist the pressure of blackmail.

“This is another troubling element of our systemic decay as a nation which we have confronted swiftly. This partnership with the Afe Babalola University bears testimony to the traction our activities have gained and we indeed commend the Chancellor, Aare Afe Babalola, the Vice-Chancellor, Prof. Smaranda Olarinde, the Students Affairs Officer, Mr Babatunde Wahab and Dr Olumide Olugbemi-Gabriel for their unwavering commitment to working with us to stamp out gender-based violence and exploitation of Women/Girls in ABUAD and the nation as a whole,” he said.

According to ABUAD, the extant and existential reality of today’s world is that criminality is festering amongst the youth populace at an alarming rate and intensity. The added that “emerging criminal tendencies and trends are noted to be enabled by advancement in ICT and a corruption-ridden larger society; this is why we are excited to see the confidence and speed with which Flagit rose to the occasion in support of the victims, who are now on the road to getting the needed closure and justice.

“From close and deliberate observation, it has become crystal clear that the manner our institution and FlagIt handled the documentation of criminal tendencies and persons, offering at the same time ready evidence in the pursuit of justice, is highly desirable and encouraging,” they said.

The ABUAD Students’ Affairs Officer and his partner, Dr Olumide Olugbemi-Gabriel, who specialises among others in gender-based oppression and exploitation of women and girls’ expressed their enthusiasm to partner with AFF to stem the rising tide of criminal offences especially domestic violence, sexual assaults and all forms of cyber-crimes within and outside ABUAD.

“In partnering with you, we are confident that our work/walk together would bring and bear positive results. We have a lot of experience to exchange on both ends and the proposed partnership will also boost our institutions’ efforts, and strengthen our technical capabilities to combat the nefarious activities of sexual offenders and cyberspace criminals in our institution and the society at large.

No Fulani sneak into Church in Anambra ― Police debunks report