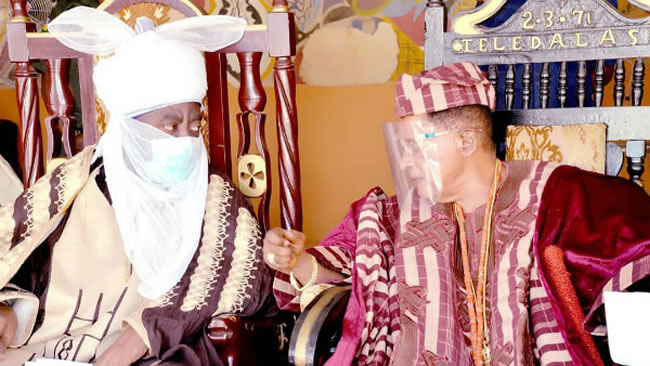 Although COVID-19 dealt a big blow to social life in Nigeria and beyond, the palace of the Alaafin of Oyo Oba Lamidi Olayiwola Adeyemi played host to quite a number of events, some of which were held in low-key fashion, in compliance with preventive measures recommended by the government against the spread of the pandemic.

One of the functions witnessed in the palace was the recent visit of the Emir of Kano, Alhaji Aminu Ado Bayero, on December 4, 2020, which caught many people off guard due to the low publicity given to it.

The palace, especially the administration of which is led by Mrs Bose Oyatokun and photography headed by Alhaji Akewusola Bolaji did not take anything for granted during preparation; every detail got the best attention according to the instructions of Oba Adeyemi whose table was receiving regular reports of updates in his tasteful office.

The Emir did not keep the palace waiting as his modest convoy of few vehicles slowly entered the palace into the waiting hands of a band of drummers and a chanter.

The Alaafin’s Press Officer, Mr Bode Durojaye, formally set the ball rolling with the introduction of the Oyo Mesi and home guests.

In his full traditional regalia complete with a big turban, the Emir sat closely beside the Alaafin, decked in a cool Ofi fabric. By his gestures, Ado Bayero left no one in doubt of his admiration for Oba Adeyemi whom he consistently referred to as his father in reference to the Alaafin’s relationship with his father, the late Abdullahi Ado Bayero, who passed on in 2014, after reigned for 51 years.

“Kabiyesi, I watch you as a role model. You are my father and I am with my Baba today. As a patriotic and nationalistic father, Your Majesty is known to have stated way back in 1984 that ‘Traditional Rulers should be seen as the perfect embodiment of the culture of a place as well as the synthesis of the aspirations and goals of the nation. This is not only in social values of veracity, egalitarianism, justice and democracy, but in dress, utterances and complement,” he stressed.

To demonstrate his understanding of the two ancient towns, he disclosed that the history of Oyo, like that of Kano, predates modern day Nigeria by hundreds of years, adding that the two towns had developed sophisticated system of political, commercial and military expertise that was unequaled.

He said, “Modern day Oyo, like modern day Kano, is a centre of excellence in education, culture and commerce. It is therefore essential that we continue to demonstrate these qualities to the world and to generations of young Nigerians, so that they may come to know our true history, which would re-enforce their confidence as they face a very challenging and globalised world,” he said.

In his extemporaneous reaction to the Emir’s extensive speech, Oba Adeyemi was insightful recalling his relationship with the Emir’s late father. He revealed that the late Emir shared his position leading to their advocacy for the upward review of traditional rulers’ allocations to five percent during the regime of the late General Sani Abacha between November 1993 and June 1998.

The Alaafin also revealed that during the Murtala Muhammed regime between July 1975 and February 1976, he, alongside the late Emir, was on holy pilgrimage to Mecca and Medina with the late head of state, also revealing how, during the regime of General Ibrahim Babangida, he was appointed Amir-ul-Hajj during which he recorded an unprecedented success in that year’s hajj operations and returned unspent fund to the coffers of the Federal Government.

Despite the fact that no traditional ruler was formally invited, the Oloba of Oba-Ile in Osun State, Oba Adekunle Asamu Oyeyemi, was incidentally a witness to the Emir’s visit. The Canadian-returnee monarch innocently travelled down to Oyo on a ‘Thank You’ visit to Oba Adeyemi, who, in November had honoured him with his presence as chairman of the book presentation marking his 70th birthday at the Osun State University campus in Osogbo, the state capital.

Oba Oyeyemi averred that the guest had started his journey on the throne on a good note, urging him to be unrelenting in building bridges across the country.

The Special Adviser to Governor Seyi Makinde of Oyo State on Culture and Tourism, Akeem Ige, was also in attendance and expressed appreciation to the love shown by the Emir. Oba Adeyemi led the Emir to the Oyo Central Mosque the following day to observe Jummat prayer together after which he left for the final burial ceremony of the late mother of Governor Makinde in Ibadan.

Inside Ibadan bound train from Lagos