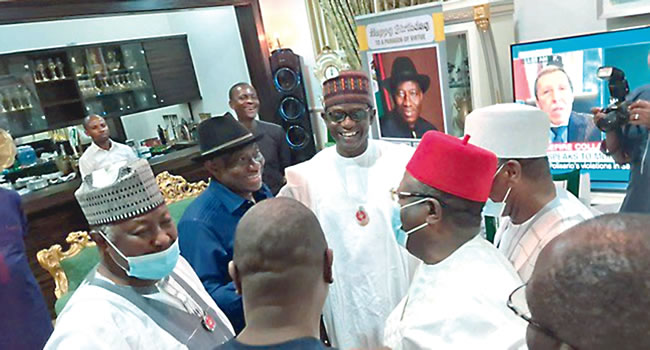 The surprise visit made on Friday night by the leaders of the ruling All Progressives Congress (APC) to former President Goodluck Jonathan at his residence in Abuja triggered a stir in the major political camps, resulting in at least four possible theories as the buildup to the2023 presidential race begins to crystalise.

The visit, which coincided with the 63rd birthday of Jonathan, who governed Nigeria from 2009 to 2015, was led by representatives of major tendencies in the APC.

The former interim national chairman of the party, Chief Bisi Akande, has also led some APC leaders from the South-West to a closed-door meeting with President Muhammadu Buhari.

Jonathan has been featuring prominently in the public space through collaborating and handling of international engagements on behalf of the Federal Government, especially in dispute resolutions in parts of Africa and the world.

He led the African Union Election Monitoring delegations to Mozambique and Tanzania, as well as West African envoys to Mali to meet with the leaders of the coup that ousted President Ibrahim Boubacar Keita from power.

The collaboration of the former president with the Nigerian government is in spite of the initial umbrage that characterised the relationship between administration of President Buhari and the camp of his predecessor.

Other members of the entourage include the governor of Ebonyi State, David Umahi, who has just dumped the PDP for the APC; his Kebbi State counterpart,  Atiku Bagudu, and chairman of the Progressives Governors’ Forum; Abubakar Badaru, governor of Jigawa State; as well as a former President of the Senate, Chief ken Nnamani and a former presidential liaison officer to the National Assembly, Alhaji Kashim Ibrahim-Imam.

Shortly after the governorship poll in Bayelsa in December 2019, Governors Bagudu and Badaru made a similar visit to the former president at his residence in Otuoke, Bayelsa State to appreciate him for his support in the victory of David Lyon, the APC candidate in the 2019 governorship election in the state.

Lyon was eventually sacked by the Supreme Court while Douye Diri of the PDP was declared winner of the election.

The visit also came on the heels of a congratulatory message from the Northern Governors Forum to Jonathan on his birthday, in which he was described as a true democrat whose “passion for the growth of democracy is reflected not only in his records while in office but also of his current engagements where he has travelled round the world to monitor elections and also engage with stakeholders.”

President Muhammadu Buhari had also, in his congratulatory message to Jonathan, observed that the ex-president had brought honour to the country.

Lack of consensus in APC

However, there seems to be no consensus among members of the powerful caucus within the corridors of power on what many regard as the seeming emerging political undercurrent in the fresh political understanding and cooperation as politicians step up horse-trading ahead 2023.

Some powerful blocs in the APC are said to be averse to and kicking against any overtures to Jonathan on the subject matter, just as there are indications of a disquiet in the Peoples Democratic Party (PDP), as it battles with whether to retain its presidential ticket for the next election in the North.

Another theory already thrown up by the APC governors’ visit to Jonathan is the perceived need to assuage the South-South over the circumstances that led to the exit of Jonathan from power more than five years ago.

Coupled with this was said to be the necessity to appreciate Jonathan for his display of brinkmanship, statesmanship and sportsmanship after it became apparent that he had lost the 2015 presidential election and conceded defeat even before the Independent National Electoral Commission (INEC) officially announced the results.

There is also the thinking in some circles that the Jonathan/APC leaders’ agenda could be designed at achieving a paradigm shift in the political space by tactically cleaning up the political arena by paving the way for a new political order based on contemporary realities within and outside the country.

In other words, a number of politicians, believed to be holding the nation’s political hostage could be tactically eased out and allow a gradual evolution of focused leadership with altruistic mission and vision emerge.

The feeling is that the political process and system had, for too long, been ridden with gross abuse, corruption and impunity, resulting into unending seamless tension and injustice in the land.

The other theory in some political circles is that Jonathan deserves to be appreciated by the APC — regardless of whatever perceived indiscretion and weakness he might have exhibited in the past — because of his tacit support that contributed in the good showing of the APC during  November 2019 governorship poll in Bayelsa, his country home.

This, they claim, was notwithstanding the fact that the ‘victory’ of the party’s standard-bearer, David Lyon, was later upturned by the Supreme Court on the ground of ineligibility of the running mate of the party in that election.

The argument in other quarters is that Jonathan appears to have reflected on core issues that characterised his tenure from 2009 and 2015 and learnt some useful lessons that could serve as a veritable compass if he has an opportunity to return to power through the ballot.

Some also contend that the ongoing discreet political manoeuvring should be rationalised on the imperative of a bridge-builder in the country because of the prevalent parlous times, gulf and disparate positions of groups and individuals on issues of national cohesion and stability.

The groups are involved in different issues and campaigns which many observers believe tend to undermine national oneness, due to perceived gross injustice and lack of fair deal in the Nigerian project in recent times.

They cited the outcry over imbalance in federal appointments, allocation of resources, distribution of key projects and signs of nepotism.

There are, however, concerns in other political quarters that the olive branch and Greek gift from a section of the largely northern political establishment could be a ploy to divide the South and weaken its collective will to build on a consensus over the succession contest in 2023.

Those who belong to such school of thought corroborated their argument with the emergent struggle and rivalry among the three political zones in the southern part of the country for the presidency in the next political dispensation.

The Igbo believe that it should be their turn to produce the president as it is the only major and dominant ethnic nationality that is yet to occupy the post since Nigeria restored civil on May 29, 1999 after a prolonged military interregnum.

Thus, leading pan-Igbo organisations such as the Ohanaeze Ndigbo, as well as eminent individuals from the South-East have led a campaign designed to ensure the choice of a president of an Igbo extraction in 2023.

Though President Olusegun Obasanjo, who governed from 1999 to 2007, hails from the South-West, stakeholders from the zone are also keen to have one of their own succeeds Buhari in office because of the massive support the Yoruba gave Buhari to realise his bid to be president after three failed attempts in the past.

Before now, there were speculations about governors, ministers, serving senators and other eminent politicians from the South-South and the South-East zones waiting in the wings to contest the presidential race.

The name of Jonathan also featured frequently not too long ago with reports that some influential forces and powerful bloc initiated the possibility of luring him to throw his hat into the ring again.

However, a powerful bloc in the APC was said to be opposed to the project because of his antecedents while in power and the overall implications for the strongholds of the APC.

According to the latter group, the initiative is capable of spiting the South-West, which ensured maximum vote and support for the APC during past elections, apart from the fact that some party stalwarts are reportedly eyeing the APC presidential ticket for 2023.

Evidence that Jonathan administration was a success —PDP

But in an official reaction on Sunday, the PDP said that the visit amounted an apology by the APC to the opposition party over ruling party for lying in the desperate move to grab power.

According to a statement by the national publicity secretary of the PDP, Kola Ologbondiyan, the visit affirms the success of the PDP while in government in the country for 16 years.

“The visit, which is a clear endorsement of the acceptability of the PDP administration, also indicates that the APC, in 2015, only created artificial symbols of misgovernance, corruption and other alleged misgivings just to discredit our party and grab the levers of power to achieve their selfish desires.

“It is evident that the Jonathan administration succeeded in office basically because our party understands the nuances of our nation, which we translated into people-oriented policies and programmes, in line with the manifesto of our party, to make life comfortable for Nigerians.

“This visit to Jonathan by the APC governors is a direct acceptance of the successes recorded by our party in building a strong nation with a virile economy that was rated as one of the fastest growing economies of the world.

“The visit is, therefore, a subtle step by APC governors into the corridors of the PDP in agreement that our party holds the solution to the myriads of problems brought to our nation by their APC and President Muhammadu Buhari.

“The PDP, therefore, receives the visit by APC governors as an apology by the APC to our party and Nigerians over the lies, beguilements and other irresponsible allegations deployed by the APC to grab power, only to lead our nation on a journey to nowhere.”

The party urged Nigerians to be wary of the antics of the APC that had failed in governance and the management of its own affairs.

“For us in the PDP, the unity, stability, progress and development of our dear nation remain paramount and as such, we will not allow the failed APC and its pranksters, who have betrayed the trust of Nigerians, to mislead them once again,” the party stated.