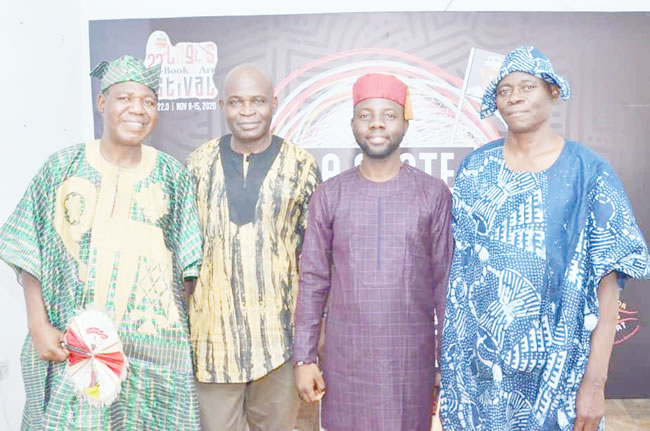 This year’s edition of the Yoruba Lakotun Colloquium, organized by Yoruba Lakotun, and held at the Freedom Park, in Lagos, turned  out to be a gathering  of those that mattered in the Yoruba arts and culture scape; a combination of the town and the gown.

The thematic thrust of the event, tagged ‘Reviving the Folktale Culture in the New World,’  was woven around how to bring to the consciousness of the public, especially those from the Yoruba ethnic stock,  the dwindling fortunes of the folktale culture, and the urgent need to revive this significant part of the Yoruba culture.

Interestingly, every speaker that took turn to speak admitted that the Yoruba culture, especially its folktales, is dying, due to the advent and ‘invasion’ of technology. They believe the average Yoruba parents no longer cherish the age-long tradition of sitting around a storyteller, by the moonlight, and would therefore not do anything to impart such knowledge to their children and wards.

For instance, the guest speaker, Dr. Oluwasegun Faturoti,  in his paper, ‘Reviving the Folktale Culture in the New World’,  acknowledged the waning influence of the Yoruba folktales. He raised the alarm of the imminent death of this vital part of the Yoruba culture, if urgent steps are not taken to address the situation.

Faturoti,  a lecturer at the Adeyemi College of Education, Ondo, in Ondo State, noted that several factors have continued to militate against the growth of the indigenous culture, especially the Yoruba of  the southwestern part of Nigeria.

The don lamented that, crucial as folktale was to the growth of Yoruba culture, the influence of that all-important cultural practice no longer got the necessary attention it deserved.

While commending the organisers for coming up with the topic, Dr. Faturoti also called on every stakeholder, especially the Yoruba people and  educational institutions in the region, to ensure that such huge legacy, bequeathed on the people by their forebears, was not allowed to die.

“The fact that we are talking here about reviving the folktale culture simply means that this all-important part of our culture is dying. It is even an indication that the Yoruba culture is also dying, perhaps in coma, and would need all the support from stakeholders to bring it back to its feet,” he stated.

While enumerating the benefits of the folktales culture among the Yoruba, some of which, he said, was to enhance communalism among the people, hone their storytelling skills and even teach moral lessons, Dr Faturoti  however lamented that changing economic climate, rural-urban migration and even modernization had not helped the cause of this vital part of the people’s culture.

“The fact remains that the situation now has changed. It will be outrageous now to ask children to gather in the evening for storytelling, when they have the television and their mobile sets that keep them busy.

“Besides, civilisation has also made this impossible. For instance, they were doing that in the past in the evening after returning from the farm to while away the time before retiring to bed. Now there is light, there is no more time to while away, and all these therefore contribute to the gradual decline in the influence of folktales among the people,” he added.

Faturoti, however, called on parents to create time to tell folklores to their children as a way of preserving the huge legacy.

“I think our institutions too should include folklore as part of their courses. There is also the need to encourage teachers so that they can take teaching of folklores seriously,” he stated.

The don also appealed to authors to cultivate the habit of writing books on folklores to enable the documentation of the very important part of the people’s culture.

Speaking at the panel session handled by Mrs Folake Benson of Yoruba Language Experts, Pastor Dahunsi Akinyemi, a Yoruba author and cultural aficionado, noted that there must be a simpler way of communicating with the younger generation; since some words are adapted from other languages into the language.

According to him, “if words that are adapted into Yoruba language are used to attract youngsters, the actual words that are used in the core Yoruba-speaking areas should be in the workbook and the glossary of the book.”

Akinyemi believes it is a strategy that should be adopted to revive the waning glory of the Yoruba folktale, in the increasing digital world.

“As an author, it is a strategy I’ve adopted, and I can tell you that it is yielding results,” he added.

Dr Clement Oyeleke Odoje of the University of Ibadan urged Yoruba speakers to embrace folklores and folktales so that this tradition would not go into extinction.

Odoje noted that there are some folklore cartoons currently on YouTube which was led by the Centre for Yoruba Language Engineering, as part of its efforts at enhancing the fortunes of the language.

“For the Yoruba language, especially its folklores and folktales not to die, it has to be embraced by children. If we can use technology to preserve and disseminate our folklores; there is hope for the survival of this tradition,” the don stated.

While speaking on the lackadaisical attitude of the private schools not agreeing to government’s instructions on the teaching of Yoruba language in schools, Mr Lawanson, a Yoruba teacher, representing Mrs Zainab Olaitan, the chairman of Egbe Akomolede Yoruba, Lagos State, urged parents to ensure that schools teach their children and wards the language.

“There are various interventions by the Egbe Akomolede Yoruba and it is important for every member of the society to work towards the survival of the language,” he stated.

The Editor of the Yoruba news magazine, Alariya Oodua, Banji Iyaniwura argues that the folktales are too significant for the Yoruba people to be allowed to go into extinction.

“The fact remains that behind every folktale in Yoruba land, there is always a story. And those were stories that taught us some lessons at childhood, but which still remain with us till date. We can’t allow all these to go into extinction, I think there should be a conscious effort at addressing this as we are doing here with this public lecture,” he added.

“If the language is not spoken well, it simply means it is already heading for language extinction,” he stated.

He also appreciated the effort of the Bukar Usman Foundation, which, he said, had supported  the project, aimed at preserving Yoruba folktales.

“Dr Bukar Usman was the champion of the project; he urged him to put together the folktales and there were a lot of extensive research into various Yoruba communities to source for the tales,” Tomoloju added.

Tomoloju also encouraged those in the creative sector to help reproduce the stories into cartoons and other ways, to enable them to attract the attention of today’s children.

Speaking on the event, the convener, Mr. Olutayo Irantiola, stated that it had become obvious that the  act and art of telling  folktales to the younger ones were fast disappearing. He, however, expressed the belief that with the efforts of  some cultural activists, such as Ben Tomoloju,  a journalist and creative writer, who had just put together 100 folktales, all hope was however not lost.

According to him, the event was one of such efforts by the organization at ensuring the preservation of the Yoruba culture.

He noted that folklores remain an integral part of the Yoruba culture, and that the organization would spare no effort at ensuring that such culture is revived.

Other events included poetry recitation by Akin-Adesola Ogundokun and Yusuf Balogun Gemini, while the old man’s segment was anchored by Chief Gbemisoye Ayano.