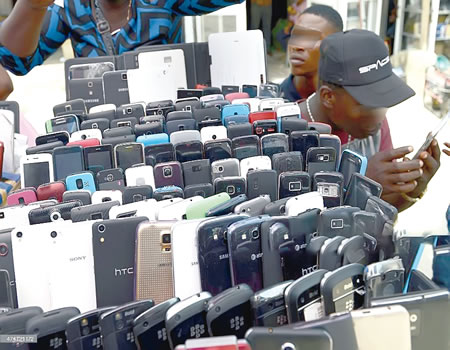 FOR as long as television has been around, people have been concerned about its effects on eyesight, and  parents and grandparents commonly admonish that children shouldn’t sit close to the TV to prevent it from hurting their eyes.

It seems the worst effects on the eyes come from watching too much television, no matter what the distance to the screen. A lot of time, television, video games, computers and phones can actually cause eye strain and fatigue, particularly for those sitting very close and/or watching from odd angles.

Dr Mary Ugalahi, a consultant ophthalmologist, University College Hospital (UCH), Ibadan said the intuition by many people that children shouldn’t sit close to the TV to prevent it hurting their eyes is backed by science.

According to her, studies are suggesting that over time, the blue light exposure from television, video games, computers and phones might actually cause some harm to the cells at the back of the eye, the retina.

The blue light emitted by computers, cell phone displays, and fluorescent and LED lights is a part of the ultraviolet light spectrum and consists of shorter wavelengths of visible light with high energy and thus high absorption rates by the retina.

“The cells at the back of the eyes pick the blue light. So, they advocate that we should reduce screen time for children, be it on smart phones, TV or laptops. But it is not as if there is a definite causal relationship.  But there is the possibility that over time the blue light can actually damage the eye,” she added.

Studies show that blue light can damage light-sensitive cells in the retina. This can lead to early age-related macular degeneration, which can lead to loss of eyesight. According to the American Optometric Association, children are more likely than adults to experience when exposed to this high-energy light.

Irrespective of this, Dr Ugalahi said the campaign that children shouldn’t watch TV close up because it could harm eyes, should rather target parents that use smart phones or tabs as pacifiers for children.

She added, “If a child wants to cry, they give him a smart phone or a tab as a pacifier. But there is that possibility of damage to the eye because of the constant exposure to blue light that over time shows up, maybe in adulthood.”

Of course, excessive TV viewing by kids can cause other eye problems. “They might start to experience such symptoms as eye strain, tearing, and fatigue because they have been staring at the screen for a long time without a break or blinking frequently as they should. This is called computer vision syndrome,” she said.

Dr Ugalahi, however, said children who frequently sit close to the television may actually be nearsighted and should have their vision checked.

Dr Yinka Ologunsua, a consultant ophthalmologist, Sight for Life Eye Centre, Ibadan, stated that the eye strain and tiredness that comes from extended close viewing of a TV occur similarly to muscle pull experience by an athlete after a long run and there is depletion of glucose in the body’s muscles.

“So a prolong concentration will cause fatigue for the eye. When that happens, there could be tearing, little discomfort and headache. So, what we advocate is put your eyes on the screen 20 minutes, give it a rest for 20 seconds before you continue.”

According to him, the reduction in blink rate due to the full concentration of the screen over a long period could also contribute to tear on the eye drying up, causing a peppery sensation feeling.  Every time, an individual blinks, tears help to lubricate the eyes.

Dr Ologunsua declared that in reducing eye fatigue from several hours on smart phones, tabs and laptops, fonts that are too little and screens that are too bright or dark should be avoided due to the deleterious effects of prolonged exposure of blue lights on the eye.

The American Academy of Paediatrics offers screen time recommendations by age: No screen time for babies up to 18 months, other than video chatting. From 18 to 24 months, use only high-quality media sources and supervise your child’s usage. Children age two to five should spend no more than an hour a day on a device.

No doubt, screen time can keep kids indoors and busy. But it seems the worst effects are not on one’s eyes and may come from watching too much television, no matter what the distance to the screen.

Nigerian system identifies with you only after you’ve succeeded —Cynthia Mene, social innovator and founder of IAGI initiative

Buhari’s Trumpian propaganda to cover up the Lekki Massacre