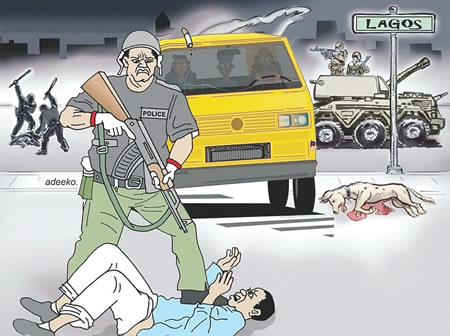 THE hashtag #EndSARS has been trending on social media for some time now, triggered by the alleged killing of a young man by officers from the unit in Lagos. SARS, also known as the Special Anti Robbery Squad,, has been called out on several occasions for carrying out extra-judicial killings and harassing innocent Nigerians. Human rights organizations define extra-judicial killings as a deprivation of life unjust or unconstitutional, and clearly a homicide. The #EndSARS movement has become a political campaign opposing SARS unit of the Nigerian Police Force. The campaign started as a social media campaign using the #EndSARS to demand for government to scrap and end the deployment of SARS officers due to their unlawful arrests, high-handedness, humiliation, unlawful detention, and extortion. A petition signed by 10,195 people was recently submitted to the National Assembly calling for scrapping of SARS. Many Nigerians have also been using #EndSARS to share stories of brutality attributed to the police unit. The stories are occasioned by videos that show SARS officers extorting money, brutalizing and even shooting people. Victims of these crimes are still waiting for justice because the anti-torture law meant to provide justice is not being enforced. Survivors have risked everything to tell their stories and seek justice, while the loved ones of those who have died do the same.

For some years now, some human rights organisations, civil society and the media have documented and reported cases of extrajudicial killings, torture, and other ill-treatment allegedly committed by SARS officers. Amnesty International’s 2020 report titled“Nigeria: Time to end impunity” shows that despite a law criminalizing torture which was passed in December 2017, SARS officers continued to act with impunity. It is quite sad that SARS, which was established to detain, investigate and prosecute suspected persons involved in crimes like armed robbery, kidnapping and other forms of crimes, has become infamous for unlawful killings and torture of innocent Nigerians. In early March, the death of Hamilton Obazee, who was arrested and allegedly tortured to death by SARS officers in Edo state, sparked several demonstrations to demand the end of SARS. The cases of brutality have prompted Nigerians to call for a reform of the police through protests and campaigns.

More recently, a host of Nigerian celebrities have been lending their voices to the #EndSARS movement. Many are calling on the authorities to ensure that measures are taken to immediately end the practice of torture and ill-treatment by SARS and that, all complaints of torture by SARS are independently and impartially investigated as prescribed by the Anti-Torture Act 2017. So far, their cries and demands haven’t fallen on deaf ears as the authorities have begun taking steps to ensure that SARS and other security units perform the duties they are saddled with. Inspector General of Police (IGP), Mohammed Adamu, in response to the public outcry, has banned SARS and other tactical units from invasion of privacy of citizens, particularly through indiscriminate and unauthorized search of mobiles, laptops and smart devices. The IGP also maintained that they should focus on cases of armed robbery, kidnapping and other violent crimes, insisting that police commissioners and commanders would be held liable for misconduct of officers in the areas they were in charge of. However, this is not the first time that there has been an attempt to reform SARS.

In 2017, the IGP directed the immediate reorganisation of SARS nationwide and instant investigation into all the allegations, complaints and infractions leveled against the personnel of the Special Anti Robbery Squad across the country by the IGP X-Squad of the Force. In 2018, Vice President Yemi Osinbajo, who was acting President at the time, ordered the “Overhaul” of SARS, “with immediate effect” following reports of human rights violation. The, then, acting president ordered the Inspector General of Police, Ibrahim Idris, to reform SARS as well as carrying out an independent investigation after “persistent complaints and reports” that concerns human rights violations. After the order, the IGP announced that the unit would be renamed to Federal Special Anti-Robbery Squad (FSARS), a new head of the unit would be appointed and also the provision of human rights desk officers to check reports.

Last year, the #EndSARS campaign led to the formation of a presidential panel to review the activities of the police unit. President Buhari has since ordered the implementation of the report of the panel. However, nothing seems to have changed since then. This has also been the case with the previous reforms of SARS as highlighted above. In an Amnesty International’s investigation published in June of this year, the rights group accused SARS officers of using torture and other ill-treatment to execute, punish and extract information from suspects. Amnesty International documented 82 cases between January 2017 and May 2020. They found out that the police unit allegedly targets Nigerians between the age of 17 and 30. The failure of the authorities to bring an end to the gross human rights violations perpetuated by the Special Anti-Robbery Squad or to bring any SARS officer to justice is unacceptable. Nigerians are outraged by the systemic human rights violations perpetrated by SARS with impunity. The systemic use of torture and other ill treatment by SARS officers for police investigations points to an absolute disregard for international human rights laws and standards.

It is time to finally end impunity for police brutality and torture in Nigeria. The authorities must go beyond lip service and ensure there is real reform or perhaps a total disbandment of SARS within the Nigeria Police Force. This police unit has repeatedly harassed and killed Nigerians. These reforms must translate into holding police officers suspected of torture to account, ending torture, unlawful detention, extortion, extrajudicial execution and other human rights violations that SARS officers are known for. Overall, this particular section of the police is more likely to commit crimes than to prevent them. The government needs to take reform seriously if they are going to improve safety and restore confidence in the police. It is also essential to ensure that the police do not monopolize or interfere with investigations of crime and misconduct by their officers. Extra-judicial killings are obvious violations of the rule of law, which seems to be a growing threat posed by SARS. If anyone commits a crime, that person should be punished by the courts. No agency, SARS or otherwise, can decide who gets to live and who will die. In the eye of the law, everyone is innocent before they are proven guilty by the court.

The rape, murder of Favour Okechukwu