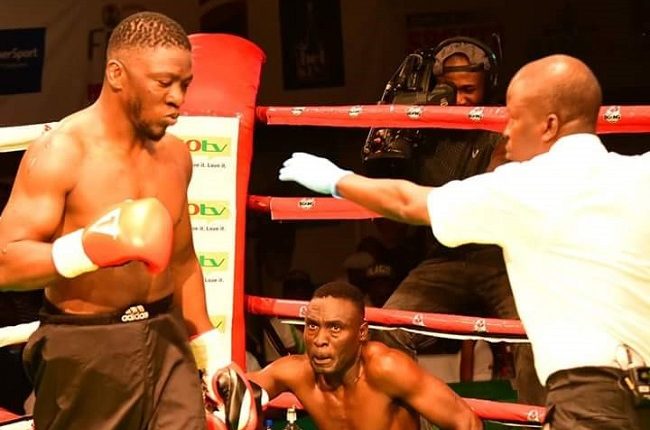 One of Nigeria’s reputable professional boxers, Akeem ‘Dodo’ Sadiku, 37, died on Saturday, two weeks after he was hospitalised at the University College Hospital (UCH), Ibadan.

He was buried also on Saturday at Ijebu-Igbo, his hometown according to Islamic rites.

According to Olusola Ayodele, President, Core Afrique Boxing Promotions, Ibadan, Dodo had earlier had surgical operations at a private hospital at NIHORT area and Jericho General Hospital, Ibadan, before the last one at UCH on Friday which he said was successful.

“He died early this morning [Saturday] after a successful surgical operation at UCH,” Ayodele told Tribunesport.

Meanwhile, chairman, Nigerian Boxing Board of Control (NBB of C), Oyo State chapter, Honourable Gbenga Opaleye, has described the demise of Dodo, who won the gold for Oyo State at three editions of the National Sports Festival,as a big loss to the sporting fraternity.

“This is a loss not only to Oyo State but to the Nigerian professional boxing at large, he was such a focused and fine boxer. We are going to miss him sorely because he inspired many of our boxers in Oyo State today. He became a role model to our boxers and he will always be a reference point.

“His death came as a shocker, it is so painful. May God grant him Aljanah fridaus and give his family the fortitude to bear this irreplaceable loss,”‘ Opaleye told Tribunesport.

Also in a tribute, secretary-general of NBB of C, Mr Remi Aboderin, expressed shock over the incident.

“We lost Akeem Dodo a pro boxer today [Saturday], our sympathy to his family, may his soul rest in peace,” he wrote on the Whatsapp platform of NBB of C.

It will be recalled that Dodo’s last fight was on December 27, 2020 when he  stopped Beninoise George Amuzu in the second round of their middleweight bout at the Ilaji Sports Resort, Akanran, Ibadan.

The Ogun State-born puncher was a force to reckon with in Nigerian professional boxing with his exploits which saw him record only one defeat in no fewer than 13 professional bouts.

He started in the super welterweight before he ended up in the middleweight category.

The three-time National Sports Festival kickboxing gold medallist for Oyo State had a 77 per cent KO ratio record at a time in professional boxing which made him one of the best fighters even on the sub-region.

Dodo before his last fight had stopped Jacob Lokossou of Benin Republic on August 12, 2019 with a first round Knockout (KO).

He was survived by four children.