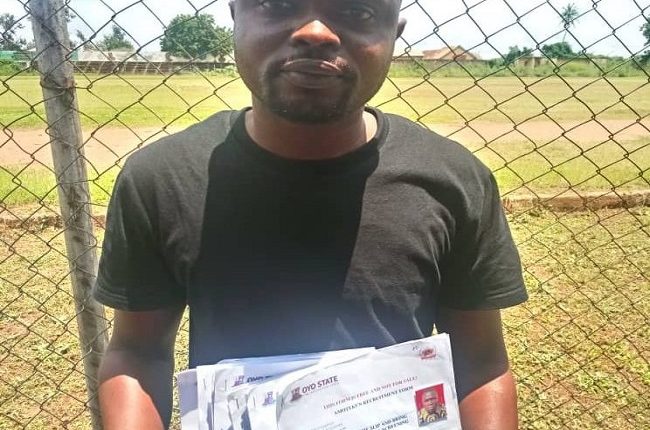 This was contained in a statement made available to newsmen on Friday by the Public Relations Officer (PRO) of the agency, Oluwole Olusegun.

The suspect who owned a cyber café along Durbar Stadium road was caught with 11 fake recruitment forms which he was reportedly selling to applicants at #500 per copy, with the promise of assisting the victims to get the job had been handed over to the NSCDC for prosecution.

Akinsanya said the suspect would face the law for his action, just as he urged members of the public to be wary of individuals that would always want to take advantage of them.

He also warned cyber cafe operators not to indulge in actions which can tarnish their image.

A fuel tanker has exploded at Anthony inward Gbagada, Lagos State. This happened as a result of the tanker losing control while on motion and fell sideways thereby leading to an explosion and got two unidentified vehicles burnt…NSCDC to prosecute man

The Lagos State government on Friday announced that it will close the popular Ojota interchange up to the second bridge in the area for three months beginning from Monday, September 21, for some repairs…NSCDC to prosecute man

Hundreds of followers of the Speaker of the House of Representatives, Hon. Femi Gbajabiamila have continued to react to the twitter message on his official twitter handle: @femigbaja, on his engagement with his counterparts from Ethiopia, Ghana, Kenya, Senegal and South Africa on the planned collaboration in the joint task of loosening the stranglehold of foreign debt on our economies, ahead of the 2021 conference of African Speakers, scheduled to hold in Abuja…NSCDC to prosecute man  NSCDC to prosecute man

I take responsibility for APC’s losses at elections ― Buhari