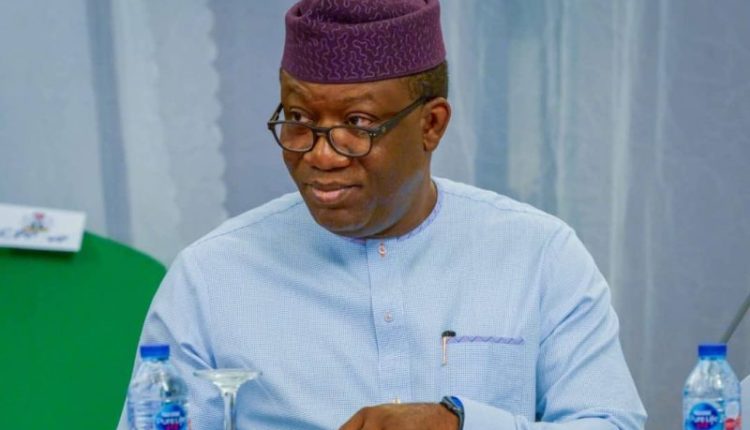 The national secretariat of the All Progressives Congress has dismissed the suspension of Ekiti State Governor and Chairman of the Nigerian Governors Forum, Dr Kayode Fayemi.

Fayemi suspension was announced by certain chieftains of the party under the aegis of Ekiti State APC State Executive.
The group which has Senators Adedayo Adeyeye, Tony Adeniyi, Honourable Bimbo Daramola and five others accused Governor Fayemi of anti-party activities.

But the acting national secretary of the party, Yekini Nabena dismissed the suspension as a nullity.

The APC Caretaker/Extra-Ordinary National Convention Planning Committee said it was not aware of the suspension of Governor Fayemi and would only accord recognition to the Architect Paul Omotosho-chaired APC Ekiti State Working Committee as “the authentic, valid and duly recognised Executive as no factions or divisions exist in the State Chapter.”

In a veiled reference to the suspension of Special Adviser to the President on Political Matters, Babafemi Ojudu, and ten others, the interim national leadership led by Yobe State governor, Mallam Mai Mala Buni equally faulted the “indefinite suspension” of some other party members in the state.”

The statement read in part:” The attention of the National Secretariat of the All Progressives Congress (APC) has been drawn to a purported and widely-reported “suspension” of the Governor of Ekiti State, H.E. Kayode Fayemi, as well as an earlier, reported, “indefinite suspension” of some other party members in the state.

“The actions are a nullity as the Party’s National Secretariat is yet to receive communication from the state chapter on the purported “suspensions”. We strongly advise all members to adhere to our Party constitution.

“Governor Kayode Fayemi remains the leader of the party in Ekiti State.

“In line with the mandate of the Governor Mai Mala Buni-led APC Caretaker/Extra-Ordinary National Convention Planning Committee and the President’s admonition to party members to ensure and support the ongoingly amicable and rancour-free settlement of internal party disputes, we call on our esteemed party members and leaders in Ekiti State to be duly guided.

“For the avoidance of doubt, the Architect Paul Omotosho-chaired APC Ekiti State Working Committee is the authentic, valid and duly recognised Executive as no factions or divisions exist in the State Chapter.”

A fuel tanker has exploded at Anthony inward Gbagada, Lagos State. This happened as a result of the tanker losing control while on motion and fell sideways thereby leading to an explosion and got two unidentified vehicles burnt…You have no power

The Lagos State government on Friday announced that it will close the popular Ojota interchange up to the second bridge in the area for three months beginning from Monday, September 21, for some repairs…You have no power  You have no power

Hundreds of followers of the Speaker of the House of Representatives, Hon. Femi Gbajabiamila have continued to react to the twitter message on his official twitter handle: @femigbaja, on his engagement with his counterparts from Ethiopia, Ghana, Kenya, Senegal and South Africa on the planned collaboration in the joint task of loosening the stranglehold of foreign debt on our economies, ahead of the 2021 conference of African Speakers, scheduled to hold in Abuja…You have no power  You have no power