Xquisite food
By Favour Boluwade On May 9, 2020 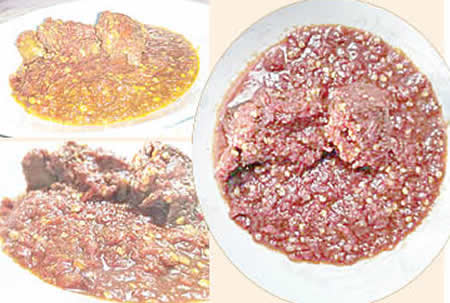 Pocho is a sauce popularly eaten by the Tiv people of Benue State, in Nigeria with a blend of meat, onions, peppers, palm oil, locust beans and seasoning.  It is a watery kind of soup , so some tend to combine  Pocho with other soups just to suit their taste.

Pocho can be eaten with rice,  yam,  or solids such as eba, fufu and other kinds of Nigerian solid foods.

To make Pocho,  you need:

A handfull of pepper balls

A ball of onion

(Pepper is the major ingredient)

Pour in a cooking pot

Add little water, enough to cook the meat you have added initially.

Add a table spoon size of oil, proportional to quantity of your meat or fish.

Add your seasoning and salt to taste.

Leave the contents to cook for few minutes.

If you prefer it thick, you might consider not adding more water.

You can use the soup alone or add with other draw soups (okro, jute)

My husband refused to work, sleeps all day —Wife