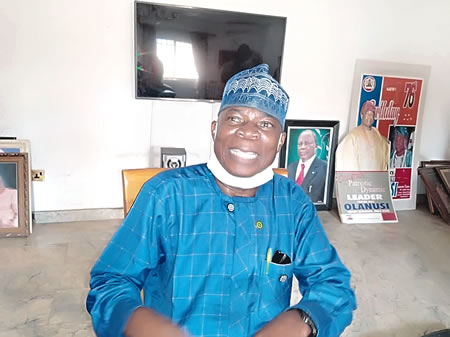 Olanrewaju Kazeem, a lawyer, is one the aspirants of the All Progressives Congress (APC) under the Unity Forum in Ondo State, He speaks with HAKEEM GBADAMOSI on the crisis that greeted to the choice of Olusola Oke as the choice of the group and why others should support Oke’s aspiration. Excerpts.

THE choice of Olusola Oke seems to be tearing the Unity Forum apart.  What actually happened?

I am one of the aspirants of the Unity Forum of the APC in Ondo State under the chairmanship of Alhaji Ali Olanusi. As an aspirant, I hail from the northern senatorial district of the state. We are two from the Akoko axis of the state, five people from Owo and three from southern senatorial district. The leaders of the group said we should not dissipate energy unnecessarily because the focus is to have one aspirant presented as consensus candidate from the Forum to engage the incumbent or any other person contesting the in primary. This is to make it easy for the aspirant presented by the Unity Forum to win the party’s ticket.

The aspirants held various meetings in Akure and Abuja. It was at the meeting we held in Abuja that Senator Ajayi Boroffice came out openly to tell us that he would not be contesting in the election and pleaded with all the aspirants to allow the Unity Forum to present a candidate that will win election for APC because we are not all happy with style of the incumbent governor. We invited the leader of the group, Alhaji Ali Olanusi to the meeting and he said if it would not be in the group if all the aspirants should participate in the primary. He stressed the need for us to come together and pick one of us because, without doing this, the results is very obvious and the purpose for which Unity Forum was established would be defeated. We all agreed to abide by the decision and outcome of the decision of the seven-man committee put in place by the forum. This is one of the reasons why I am standing with the decision of the committee, though I was not happy because I aspired to become the governor too. If I become the governor, I could still perform better than this present governor. At the end of the day, one of us was picked, Chief Olusola Oke. Everybody is not happy with Governor Akeredolu the way he is running the affairs of our state. I would have wished somebody from Ondo North (senatorial district) succeeds him during the 2020 election, but it is only honourable if we all support the choice of our Unity Forum.

But some aspirants have been kicking against the choice of Oke.

We all agreed to abide by the outcome of this process and I see no reason why we should be going back on our promise. My advice is that we should all accept the decision of the committee and support Oke who has been chosen. The seven-man panel voted on the day the decision was made, and six of the seven members were present at the sitting, and the six people voted,  four in favour of Oke and two  members voted for an aspirant each. If we really love this state and have the interest of the state at heart, if we don’t want all the exercise to be in futility, we must abide by the decision of the committee. We need to speak with one voice to dislodge Akeredolu during the party’s primary. Let us work towards same goal and we should all drop our personal ambition for the collective good of the people of the state.

But the secretary of the Committee said the choice of Oke should be disregarded, while the aspirants too are describing it as a ruse. What’s your take on this?

I have told you the gospel truth of what happened, though some people want the slot to be zoned to the north. Senator Boroffice is not an aspirant and member of the panel. So, I wouldn’t know how he knows what transpired. But I learnt that Ehindero also voted during the process and to come back to sing another tune is what I don’t understand. We must ask him questions why he decided to sing another tune after the process had been completed and Oke confirmed as the group’s choice.

Are you dropping your aspiration for Oke?

I belong to the Unity forum and subscribe to all its ideology. I have given my words during the process that I will abide with the decision of the committee and it will be wrong for me to turn my back on the promise I have agreed on. We are gentlemen and should not turn our back to our agreement. It should be followed. As for me, I don’t believe in do or die politics. I have spoken with virtually all the aspirants over the development, but one thing I don’t subscribe to is the idea of if it’s not me, it shouldn’t be any other person. It is bad and we can’t move forward with this attitude.  Let me also use this opportunity to warn against what happened in Zamfara State where our party with over 500,000 votes lost out and the PDP with over 100,000 votes is in power in that state today. Our leaders must seat down and do a direct primary for Ondo state election and must respect the outcome to avoid repeat of what happened in Zamfara.