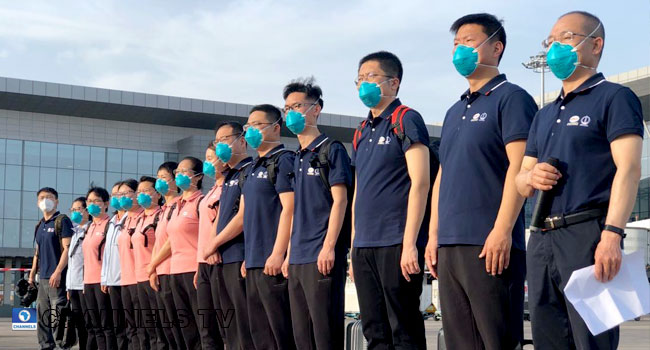 The China Civil Engineering Construction Corporation (CCECC) on Friday said the 15-man Chinese medical team has been carrying out its “assignment in Nigeria basically in an advisory role capacity and not treating coronavirus patients.

In a statement released on the official Twitter handle of the company on Friday, the CCECC said the mandate of the team did not cover treating COVID-19 patients and the medical experts have not done so in any instance.

The company said the team had assisted in setting up isolation centres and had provided support to CCECC staff on how to guard against COVID-19.

The statement said the medical experts are willing to share their experiences fighting COVID-19 in China with Nigerian health officials.

“After a 14-day quarantine and necessary tests, the medical team has been carrying out its assigned mission,” the company said.

“The medical personnel are in Nigeria at the instance of CCECC Nigeria and they have been at all times under the care and accommodation of CCECC. During their stay in Nigeria, they have complied with all known immigration and health protocols.

“It is important to reiterate that the mandate of the team, as mutually agreed with all stakeholders, does not cover treatment of COVID-19 cases. The team is therefore not treating any COVID-19 cases. In dealing with both the CCECC and the Nigerian health officials, the team only played an advisory role.

“They would continue to engage with CCECC management and staff and will always be willing to engage with Nigerian health officials and other stakeholders whenever and wherever it is necessary to do so,” the construction giant stated on Friday.

It would be recalled that there was confusion on the whereabouts of the team after Osagie Ehanire, minister of health, told newsmen that he preferred not to be asked where they were.

Michael Yigao, CCECC managing director, later clarified that the team was in his company’s care.