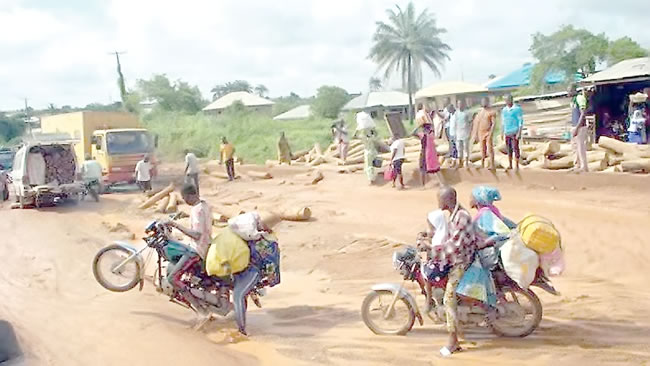 NURUDEEN ALIMI recently embarked on a trip from Ibadan to Alaga in Itesiwaju Local Government Area in Oke-Ogun zone of Oyo State for a special report on agriculture. He reports his experience on the road which is the major gateway between the state capital and Oke-Ogun region.

THE Oke-Ogun region of Oyo state is one of the richest in Nigeria in terms of natural deposits and agricultural production and is acclaimed to have contributed a lot to the development of the state and Nigeria; but for many reasons, it has remained the most undeveloped and marginalised.

According to experts, the resources of the region makes it is richer than some African countries, including Botswana which is rich in diamond and adjudged one of the most prosperous African countries, as Oke Ogun’s solid mineral deposits are said to have no equal in Nigeria.

Marble, dolomite and others are in Igbetti, Olorunsogo and in Oriire local governments. Other notable mineral resources are also in large quantities in the region: Tourmaline is in Komu in Itesiwaju, Tantalite in Sepeteri, Quartz is also in Itesiwaju, Columbite, talc and several other minerals are also found in all parts of the region.

The Ikere Gorge Dam, which has the capacity to boost the agro-industrial development and also supply power to the people of the state and beyond has been abandoned for years.  The human capital in the area is comparable to what obtains in any part of Nigeria; yet, the people have suffered neglect and underdevelopment.

The land is rich and suitable for agricultural and agro-allied uses but 70 per cent of the population are engaged in subsistence farming and related activities.

The average first time traveler on the Ibadan/Oke-Ogun road would certainly have a traumatic experience due to the deplorable state of the road. From Ibadan to Saki, a distance of 184 kilometres which should not take more than two and a half hours now takes up to more than five hours as there are many hurdles to cross while traveling on this road. And to put an end to this challenge, the Oyo State government  November 2019 re-awarded the reconstruction of the Ibadan/Iseyin road which leads to other parts of Oke-Ogun at the cost of N9.9 billion, having revoked the contract awarded by former governor Abiola Ajimobi.

According to Governor Seyi Makinde, when completed, the road will address the challenges of moving farm produce from Oke-Ogun axis to Ibadan, the state capital.

Police checkpoints ordinarily are meant to check criminal activities to check. But Nigerian Tribune reporter noticed that the checkpoints have been turned to tollgates as commercial drivers who refuse to part with N100 would have their journey disrupted with unnecessary delay as they are not allowed to pass until they pay.

Nigerian Tribune further found out that police officers at these checkpoints do not care nor are they afraid of the status or identity of occupants in the commercial vehicles as they openly conduct their illegal business of extortion and even issue change to drivers who tender higher denomination of the Nigerian currency.

Few meters to any of these checkpoints, the driver would have signaled to the police officers the amount of change he is collecting by raising his fingers. If he would be collecting N400 change, he would raise four fingers which simply indicates that he is tendering a N500 note.

The seamless method of extortion leave many who are not familiar with the road amazed as many do not expect the law enforcement officers to be so brazen in their unethical act.

Oke-Ogun is known to be a border axis to some West African countries like the Republic of Benin and Togo. The proximity of these towns to the border has been leveraged upon by smugglers to move items, especially rice, into the country. It is also alleged that those saddled with the responsibility of curbing the activities of smugglers on the road have become accomplices that make it easy to smuggle goods.

A driver on the Ibadan/Saki route told Nigerian Tribune that law enforcement agents on the road collect not less than N5,000 on each 50kg bag of imported rice, adding that it is only a driver who refuses to pay that will have the contraband seized.

“That is the usual practice here and it has been going on for a very long time. That is why you will continue to see imported rice in the market despite the ban on its importation by the federal government.

“What these law enforcement agents also do is that whenever any festive season such as Christmas is approaching, they seize a lot of bags of rice. Last year, I parted with two bags of rice on this road. Whether they sell the seized bags of rice or they take them to their family, I cannot really say.

“I have a strong belief that this will continue till God knows when because we learnt that even some superior officers who are supposed to call these personnel on the road to order are also actively involved,” he said.

One of the passengers on the bus was a foreigner, a Togolese. She was the only female passenger as at the time the vehicle was leaving the park early that morning.

Since the bus was not filled up when it left the park, it stopped at the Moniya end of Ibadan/Iseyin road and three other women joined the trip to the relief of the lone Togolese woman, who heaved a sigh of relief and freely interacted with the other women in Yoruba language with heavy accents.

At a point during the journey, the driver asked the Togolese: “Foreigner, owo immigration e da?” meaning: “Foreigner, where is your money for immigration?” And the woman without hesitation brought out N1, 000 note from her bag and handed it to the driver who at a checkpoint mounted by immigration officials joked freely with the officers and was allowed to pass without any question or inspection.

Few meters from the checkpoint, the driver returned the N1,000 to the Togolese, after telling her that “Emi ni mo save e nibeyen o, awon ore mi niwon” meaning “I was the one that saved you there because those immigration officers are my friends.”

The driver told Nigerian Tribune. “that is the usual practice. Whenever there is a foreigner in the vehicle, we just give them money and they will allow us pass without the passenger having a valid travel document. Had it been you are going to Saki, you would have seen a lot of this happening on the road. As far as I am concerned and with my experience on this road in the past years and still counting, Nigeria can never be a sane country.”

There were no measures put in place to guide against the spread of COVID-19 at the motor park as ordered by the federal and state governments. Aside from the fact that there was no documentation of passengers’ data as prerequisite for interstate commercial transportation, passengers on the bus sat four on each row as against two recommended by the social distancing rule. The Nigerian Tribune reporter had to pay for two seats to ensure he sat alone with the driver in front.

Also, none of the passengers made use of face masks and the driver hung his facemask on the steering wheel.

Why entrepreneurs must embrace Blockchain for business growth