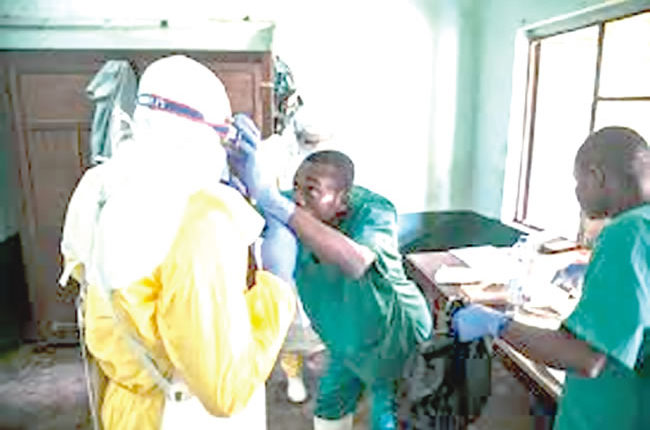 While the world is reeling from the ongoing COVID-19 pandemic, Ebola has again emerged, simultaneously, in both Central and West Africa. In this report by Sade Oguntola, experts highlight what Nigeria must do to respond quickly and effectively to the outbreak before it becomes large-scale epidemics.

With the number of confirmed COVID-19 cases on the African continent surpassing 3.8 million, a fresh outbreak of Ebola in Guinea and Congo is becoming a source of concern to the World Health Organisation (WHO), the Africa Centre for Disease Control and Prevention (Africa CDC), International Federation of Red Cross and Red Crescent Societies (IFRC) and the European Union.

The death of several African ministers and eminent personalities due to COVID-19 has led to concerns that health care systems may be overwhelmed due to a second wave of the coronavirus and the possible spread of a new, more transmissible COVID-19 variant that was first detected in South Africa and has now been found in other African countries, including Nigeria.

With health care systems in Africa suffering from neglect and underfunding, the idea of the continent facing a fresh pandemic of Ebola virus disease is a serious concern for health professionals and regulators.

The WHO said Guinean health authorities have declared an outbreak of Ebola virus disease in a rural community in the south of the country with no fewer than seven people infected. Afterwards, the Democratic Republic of Congo (DRC) recorded fresh cases of Ebola in the North Kivu province of the country.  As of February 22, 2021, two African Union member states had reported 14 cases, nine deaths and zero recoveries of Ebola virus disease.

Ebola virus disease (EBOV) was first described in 1976 in two simultaneous outbreaks in the Democratic Republic of the Congo. The outbreak was the first anywhere in the world to reach epidemic proportions.  Unfortunately, extreme poverty, local burial customs of washing the body, dysfunctional health care systems and distrust of government after years of armed conflict, all contributed to the failure to control the epidemic in Congo.

Ebola virus disease does not kill within a day. The virus has an incubation period of between two and 21 days. People get progressively sicker as the virus multiplies in their bodies. Some studies from the previous outbreak in Guinea indicated an average of eight days from the onset of symptoms to death.

According to the World Health Organization, Ebola virus disease has an average case fatality rate of 50 per cent, though it can vary by outbreak.

Nigeria is responding to the new Ebola virus disease outbreak. The Nigeria Centre for Disease Control (NCDC) last Friday placed Nigeria at ‘moderate risk’ of the virus as Guinea battles the contagion. Given the proximity of Guinea to Nigeria and other West African countries as well as other indicators, Nigeria has been placed at moderate risk of an EVD outbreak.

The chairman of the Lagos State Primary Health Care Board, Professor Akin Osibogun, stated that Nigeria’s risk of Ebola virus disease stems from free movement of people from neighbouring African countries,as it happened in 2014 when someone from Liberia brought it into the country.

The 2014 Ebola outbreak, the biggest in history, killed more than 11,000 people in Guinea, Liberia and Sierra Leone. Among these were over 500 health workers.

Osibogun, a public health expert, however, said health workers much more than before need to maintain a high level of suspicion of viral diseases such as COVID-19 and Ebola virus disease in individuals with fever and general body aches and pains,  rather than assume all such cases are due to malaria.

He said they also need to use universal precaution—regularly wash their hands, use gloves and personal protective equipment—when moving from one patient to the other.

Professor Osibogun declared that Nigerians much more than ever before comply with maintaining social distances and a high-level of personal hygiene, as well as avoid body contact with sick individuals and their body fluids, hugging and individuals that are just back from travels along the West African coast.

Professor Osibogun declared that the Ebola virus disease has been around for over 30 years and in places like Congo, but it keeps resurfacing when it jumps from animals to humans when man deforests, eats Ebola-infected animals such as bats that are not cooked well or move into animal habitats.

The public health expert said there are potent vaccines for Ebola virus disease and usually, when there is an outbreak of the disease, vaccination is deployed to contain the disease in areas with its outbreak.

Dr Jide Idris, a former health commissioner in Lagos State, says Nigeria’s risk  of Ebola virus disease will remain low if swift and sure actions are taken early to prevent the disease from getting into the country.

According to him, “We must continuously monitor the spread of the disease in the continent, communicate with the people on what to do to prevent them from getting the infection (personal responsibility). And should they get it, we should be in a position to detect it early and treat appropriately.”

“There should be increased surveillance and preparedness for an eventual outbreak. Luckily, the COVID-19 situation is forcing us to do the right things, some of which are applicable to Ebola. This is the time to start sensitizing people to what they should do as a people and what the government should put in place, both generally and specifically.

“Monitoring the spread outside of the country is important, likewise linking up and collaborating with our neighbours and other African states, instituting systems to prevent spread into the country, training of appropriate personnel on various strategies and getting our diagnostic facilities ready.

While Nigeria should be able to leverage on its past experience against a new occurrence of Ebola virus disease, he declared that each state of the federation should be involved in preventing and taking responsibility for Ebola virus disease as it is not only a federal issue.

“Its points of entry could be land, air and sea border and from one state to another with international airports or land borders. So, all states should be prepared,” he added.

Dr Idris said much more than ever, the government should look into the deficiencies in the health system such as resources, systems and protocols as well as operationalise the one health agenda for the country.

Professor Christian Happi, Director, African Centre of Excellence for Genomics of Infectious Diseases (ACEGID) at the Redeemer’s University in Ede, Osun State, says ensuring the country’s risk of Ebola virus disease remains low would require Nigerians and the government to be on the alert, the activation of mechanisms for early detection and treatment as well as education of people in the community about the problem.

Meanwhile, the International Federation of Red Cross and Red Crescent Societies is appealing for $9.4 million to fund efforts to prevent a new Ebola outbreak from spreading across West Africa.  The money will be used to step up “surveillance and community sensitization efforts” in Guinea, Liberia, Côte d’Ivoire, Mali, Senegal and Sierra Leone.

Mohammed Mukhier, the IFRC’s Regional Director for Africa stated that “Close social, cultural and economic ties between communities in Guinea and neighbouring countries create a very serious risk of the virus spreading to Liberia, Côte d’Ivoire and Sierra Leone, and potentially even further.”

When aged parent suffers from dementia: What can you do?