Arts and Reviews
By Opeyemi Ayomide Oyenekan On Feb 25, 2021 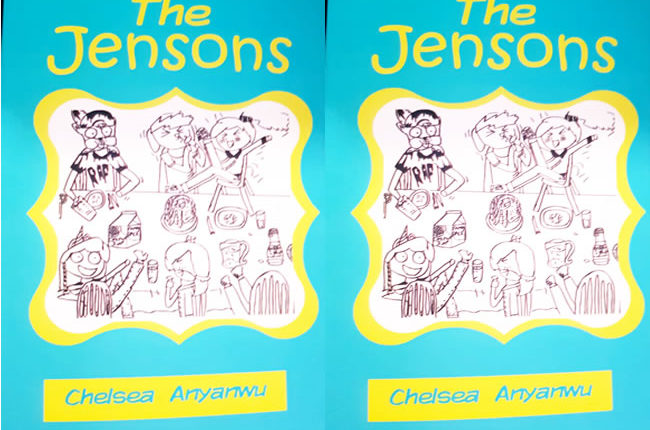 She began writing the book—a five-chapter, eighty-seven-page fiction published by Faunteewrites Books—about three years ago. Written in series, set in New York, and replete with illustrations she drew herself, the book cuts across different themes ranging from family conflict, disagreement, unity and loyalty among siblings.

The Jensons’ family is a typical privileged nuclear family consisting six of daring, but funny children—Rainbow, Sparkle, Sally, Sammy, Mike and Jade—and their working parents who try hard to create time for them.

For many who do not know what families with many children go through to survive, to be happy and to live in peace, this book tells it all. The book explores the complexity and the mysteries of the family unit, and the sacrifice and the understanding that bond family members together.

Maybe a brief chapter-by-chapter summary would help to do justice to the book.

In chapter one, subtitled ‘A horrible morning’, Rainbow wakes to a bang on the door at 4 am by Sally’s friend who is hoping for a play, but Rainbow shuns her off. And this is usually how the beginning of their typical school day likes like. The confrontation between the children and their neighbour, Mrs Moo-moo, did not let the morning go unnoticed.

In chapter two, subtitled ‘Chaos’, Rainbow gets to school with her sisters that morning. She meets her classmate Mac and two other boys, Keef and Original. They all decide to go see the graveyard behind the school with Rainbow’s friend Lucy D, but they get into trouble. The day could not have gotten any better as a flood, which results into a fire engulfs the school, leads to temporary closure of the school.

In chapter three, subtitled ‘The days of the week’, Friday—which means ‘Fry-day’ to the Jensons’ children—arrives, but two weeks before, it results into a fight among the children, except Sally. This time, another fight ensues, which is worse than the former, and which results in the police and the army getting informed. The siblings get grounded by their parents. However, Sally brings the idea of them apologising to one another and to their parents. This brings back peace to the home.

In chapter four, subtitled ‘Magical board game’, the children decide to play a board game. They go through the instructions and get to the part they have to pick a character they would like to play with.  In the process, however, they get so involve with the game with the character they pick. It goes on, and they have no idea how they complete the game.

Finally, in chapter five, subtitled ‘Time to fire Jade!’, they get back from the rendezvous when Jade tunes in the news of the tiger that attacks a zookeeper. Suddenly, Jade gets lost in her thought and wonders how it feels to be poor. She tells her siblings about her thoughts and later hatches a plan with them to get her fired from her Job so she could experience poverty.

The young author employed the use of figures of speech such as similar, personification and metaphor in the narration. An example could be seen in the first chapter where the Jensons’ neighbour Mrs Moo-moo is refer to as a cow, probably because of her stature. The scene goes thus: “Jade dragged herself to the door and opened it, and in front of her was their neighbour, Mrs MOO-MOO. The neighbour was an overweight cow with a seven-year-old. The little cow wore a pink bow on the middle of her head.” Others examples could be seen in the metaphorical names of some of the characters like Original, Rainbow, and Sparkle.

The book offers new insights into the family space and narrative, and how conflict and love define them. The book transports us from the world of imagination to the world of reality, and shows us another way of embracing or showing our humanity.

Furthermore, and more importantly, the book brings us to the understanding that in virtually every family with many children, there is that child that is more peaceful and brings harmony in the home. And, in the Jensons’ family, that child is Sally.

From this book, children and young people could learn a lot of things such as patience, sacrifice, family bonding and how to resolve problems among their siblings. They could also learn how to live in peace with their family, and speak up for themselves and also how to handle bullying, especially in school.

Some of the things that stand out when reading the book are the illustrations—funny and interesting cartoons—that properly capture the narration and intension of the author. What makes the illustrations fascinating is the fact that are drawn by the young author, and the illustrations/cartoons imperfection reflects the creative, yet learning mind and hands of the young promising writer and graphic designer/cartoonist.

In Chinua Achebe’s review of Chimamanda Ngozi Adichie’s ‘Half of a Yellow Sun’, he noted that “We do not usually associate wisdom with beginners, but here is a new writer endowed with the gift of ancient storytellers… Adichie came almost fully made.”

I believe Achebe’s submission about Adichie could literally apply to Anyanwu—this gifted, new, young storyteller who came almost fully made. And, just like Adichie’s ‘Half of a Yellow Sun’, Chelsea Anyanwu’s ‘The Jensons’ is an interesting, daring page-turner anybody and any family should lay their hands on.

Analysing Nigeria’s name as a foundation of its troubles