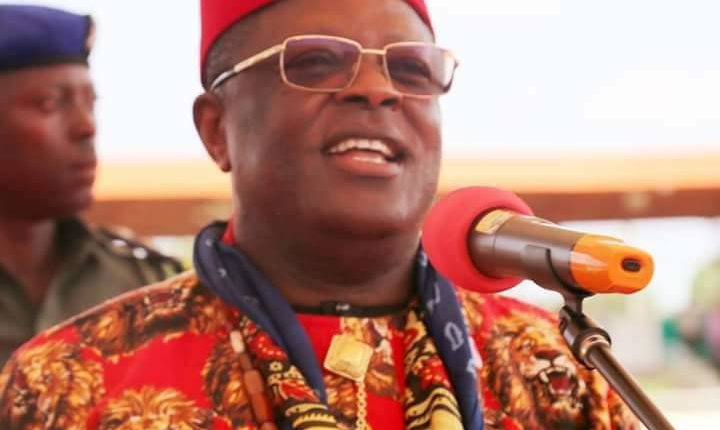 A few hours after the Ebonyi State governor, Chief Dave Umahi, officially defected to the All Progressives Congress from the Peoples Democratic Party (PDP) on Tuesday, the PDP on Tuesday night announced the dissolution of the ward, local government and state executive councils of the party.

It also announced the dissolution of the South-East Zonal Caretaker Committee of the party. 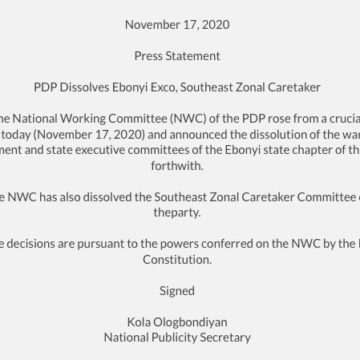 The governor had earlier in the day announced that he had dumped the PDP and decided to join the APC, adding that he was leaving the party because the South-East geopolitical zone has suffered injustice from the PDP.

However, on Tuesday night, the PDP issued a statement where it announced the dissolution of all the executive organs of the party from the ward level to the local government level and also the state level.

According to the three-paragraph statement issued by the PDP’s National Publicity Secretary, Kola Ologbondiyan, which was posted on its social media platforms and was seen on its Twitter handle @OfficialPDPNig, the dissolution is with immediate effect.

The statement read: “The National Working Committee of the PDP rose from a crucial meeting today (November 17, 2020) and announced the dissolution of the ward, local government and state executive committees of the Ebonyi State chapter of the party forthwith.

The NWC has also dissolved the South-East Zonal Caretaker Committee of the party.

These decisions are pursuant to the powers conferred on the NWC by the PDP constitution.”

Last week, the 46th week of the pandemic in Nigeria, the country recorded 1,206 new infections (November 8 – 14), an increase when compared to the 923 cases recorded the previous week