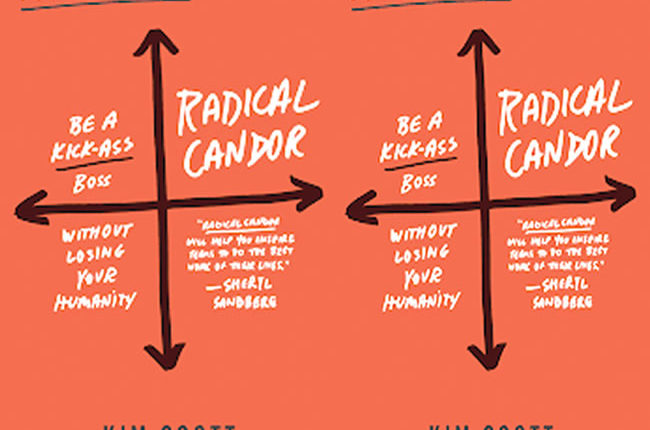 Whether you’re managing people or simply interacting with them, giving and receiving feedback can often be tricky. I believe that being able to both share and receive feedback is a true skill that only few people have truly mastered.

The main premise of “Radical Candor” is that you don’t need to cuss or shout or act rude to be a great boss. In contrast, the book encourages leaders to create relationships based on trust with the people that you work with.

I really like Kim Scott’s definition of a boss’ responsibility: “bosses guide a team to achieve results.” Bosses are ultimately responsible for achieving results. Rather than doing all the work themselves, bosses rely on other people to achieve results, and will guide them accordingly.

The point about the importance of building and maintaining “trusting relationships” is probably the crux of the book. Once a relationship of trust has been established, it becomes so much easier to practise “radical candor” on a daily basis. Unfortunately, there’s no set formula for developing trust. Scott, however, has identified two dimensions that help people move in the right direction: “Care Personally” and “Challenge Directly”.

Care personally — I was really pleased to read about Scott slashing the idea of people having two radically different personas — with people’s work persona being radically different to their private persona. Scott makes the point that you need to be your whole self to have a good personal relationship. She also talks about genuinely caring for the people who work for you as a critical prerequisite for a strong relationship.

Challenge directly — This involves telling people that their work isn’t good enough. Scott argues that challenging people “is often the best way to show them that you care when you’re the boss.” As counterintuitive as it may sound; challenging people directly can be a great way to establish a relationship. Challenging people, in a clear but constructive way, is often appreciated — despite it feeling hard initially.

“Operationalising” good guidance — The book introduces a helpful matrix, which has four quadrants to consider in light of how to best care personally and challenge directly: “Ruinous Empathy”; “Manipulative Insincerity”; “Obnoxious Aggression” and — the desired one — “Radical Candor”. Scott stresses that each quadrant refers to guidance, not to personality traits. These quadrants are not used to label people, but to learn about the types of guidance we are or should be providing to the people we interact with.

How to criticise without discouraging? — Scott mentions a number of useful tips on how to criticise people without discouraging the person. Also, it’s important to ask for criticism before giving it. As hard as it can sometimes feel, it’s important to actively and continuously ask for feedback, as a way of building a two-way relationship. Scott provides some pointers to make it easier to ask for guidance, particularly from people that report to you.

Secondly, be humble and helpful, offer guidance in person and immediately, criticise in private, and don’t personalise. Thirdly, make it clear that the problem isn’t due to some inflexible personality flaw, and share stories when you’ve been criticised for something similar.

Main learning point: Being radically candid doesn’t mean that you can just be rude and upset people. Instead, “Radical Candor” does a great job of offering readers with lots of valuable tips about how to care personally and challenge directly.

Guidance: Guidance is often called “feedback”. People dread feedback — both the praise, which can feel patronising, and especially the criticism. However, in order to solve problems or make the most of opportunities, people do need to solicit guidance from others, and encourage it between them.

Team-building: Building a cohesive team means figuring out the right people for the right roles: hiring, firing, promoting. Once you’ve got your team in place, the focus should be on engaging with your team (without micro-managing) and keep people motivated.

Results: Ultimately, it’s all about achieving results. As a boss it’s your responsibility to guide your team towards achieving key results.

A word of warning: “Radical Candor” isn’t about offering bosses a blank cheque to be rude or aggressive and act like a jerk. Whilst I believe in directness over sugarcoating things , I’ve learned that 100 per cent directness doesn’t work for everyone and can easily be perceived as aggressiveness. Scott’s point about the debilitating nature of obnoxious aggression therefore really resonated with me.

Manipulatively insincere guidance happens when you don’t care enough about a person to challenge directly. People give praise and criticism that’s manipulatively insincere when they are too focused on being liked or think they can gain some sort of political advantage by being fake — or when they’re just too tired to care or argue anymore. When you challenge directly, as Scott explains, you truly care about the people that you challenge. The flip side happens when you don’t care and end up simply wasting your and everybody else’s time by trying to fake it.

Tell my Mother I was unarmed