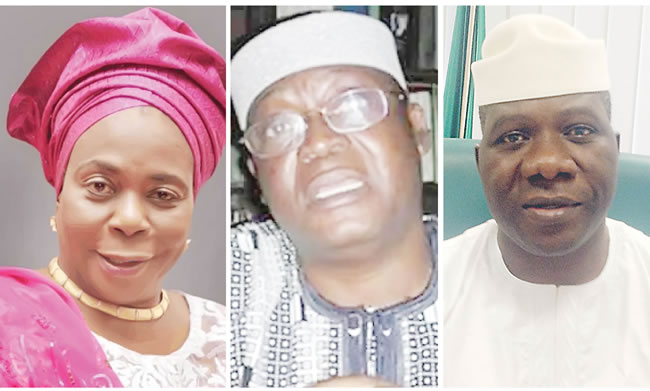 Ahead next year’s governorship election in Ekiti State, the two leading parties: the All Progressives Congress (APC) and the Peoples Democratic Party (PDP), are oiling their machineries for the contest. While those of the APC are playing their cards to their chests, it appears those in the PDP are coming out publicly. In this piece, ‘YOMI AYELESO takes a look at the gladiators and issues that might shape the state’s 2022 governorship election.

JUST about a year and few months away, the people of Ekiti State will file out once again to elect who succeeds the incumbent governor, Dr Kayode Fayemi, whose second term in office ends in October 2022. While the APC is strategising to ensure it remains in power after Fayemi, the major opposition, the PDP, is putting in place measures to launch a return to the Government House, which the party lost to the APC in 2018.

Like it was in 2018 when the then governor, Mr Ayodele Fayose, was determined to install his successor, Fayemi is also said to be keen on who succeeds him in the Oke Ayoba Government House.  As it stands, the two parties are battling internal crisis which pundits believe, if not properly handled, might affect the chances of their parties at the poll.

One of the significant issues that have been generating traction is which zone produces the next governor. Some stakeholders in both parties from the southern senatorial district have been canvasing for a governor from the zone in the spirit of equity, justice and fairness. They argued that since the creation of the state, the zone is yet to rule the state and they vowed to push the agenda and agitation to a logical conclusion. The coordinator of the Ekiti South Development Agenda (EKDA), Mr Idowu Afuye, said the group, consisting of prominent members, had been meeting the gladiators in both the PDP and the APC on the need for them to respect their agitation. He explained that since the creation of the state in 1996, the zone had been left undeveloped and abandoned. According to him, all the present and former governors have come from the other zones of Ekiti North and Central, which he said was not part of the ideals of a democracy. Afuye said: “From records, Ekiti North and Ekiti Central senatorial districts have produced governors on three different occasions each. For instance, Otunba Niyi Adebayo who governed the state from 1999 to 2003 and Ayo Fayose from 2003 to 2006 and later 2014 to 2018  are from the Central, while Mr Segun Oni from 2007 to 2010 and Dr Kayode Fayemi from 2010 to 2014 and later 2018 to date are from the North.

“It is our hope that for justice, equity and fairness, Ekiti South should naturally be allowed to produce the next governor of Ekiti come 2022 without any controversy. We have commenced consultations and we do hope and believe that every stakeholder in the Ekiti project will key into this lofty agenda.” Considering the large chunk of votes from the zone, it has been said that the political party which picks its candidate from the zone might be coasting home to victory in the governorship poll.

Events in recent times suggested that the ruling APC and Governor Fayemi, was expanding and oiling his structures across the state in preparation for the primaries and the main election. To him, the avalanche of projects and programmes of his administration would be best managed, completed and sustained if someone from his political family succeeds him. Though the governor is keeping his cards to his chest as regards his successor, some names within and outside his cabinet have been mentioned, including the Secretary to the State Government (SSG), Biodun Oyebanji; the Chief of Staff to the governor, Biodun Omoleye and the Attorney General and Commissioner for Justice, Wale Fapohunda, as well as a former Chief of Staff to Fayemi during his first tenure as governor and current member of the House of Representatives, Yemi Adaramodu, and his colleague in the Senate, Femi Bamisile, and the senator representing Ekiti Central, Michael Opeyemi Bamidele.

Of all the names, it is only the duo of Ilawe-Ekiti-born Adaramodu and Bamisile from Omuo-Ekiti are from the southern district of the state and if zoning would be a factor from the governor’s camp, the two appear favoured. A source claimed that the governor had not disclosed to anyone on his plans for the 2022 governorship poll in the state. The source maintained that Dr Fayemi was being careful not to cause confusion in the government. “If you know the personality of Governor Fayemi, you will know that it is extremely difficult to know his mind as regards the person who might want to succeed him. People are only trying to predict from his body language by mentioning some persons close to him within and outside his cabinet. The truth is nobody has been chosen as the likely successor but people are only speculating which is normal especially when election is close by now,” the source stated.

At a recent retreat organised by the state government for cabinet members, a former Borno State governor and senator representing Borno Central, Kashim Shettima, was one of the speakers. He appealed to Dr Fayemi to resist the temptation of imposing a successor but to allow the system to produce a capable leader that would continue his developmental strides in the state. Shettima also urged leaders in the country to always place premium on competence and capability in appointing leaders against other primordial considerations. According to him, “Competence, capability, integrity, maturity and depth of appreciation and acceptability by the general public are better considerations in politics than primordial sentiments. The governor should allow the system to produce his successor rather than impose on the people. Twenty one people wanted to succeed me, but I understood the politics and allowed the system to produce my successor, Professor Babagana Zulum and you can see the good work he is doing.”

Fayemi, who might have had a premonition of some cabinet members nursing the ambition to succeed him, disclosed while declaring open the retreat that members of the State Executive Council (SEC) must remain focused  on the government’s  developmental agenda or resign, rather than allowing the 2022 governorship struggle to truncate his vision. “Those who will work against our focus through ambition can excuse and allow us get focused. We can’t, at this time, be working at cross purposes and derail the focus of government. We are opening new areas of opportunities and we must work hard to sustain this. We have brought two former governors to tell us how they have been able to entrench progressive governance in their states despite the challenges,” he said.

However, of all the permutations, the crisis in the party, which culminated in the suspension and counter suspension of members last year in the APC is still far from over. While the national caretaker committee of the party voided those suspensions, the gladiators are yet to sheath their swords. The aggrieved leaders, who formed the stakeholders’ forum within the APC have, on many occasions, claimed that they had not been given enough sense of belonging in the running of the party in the state. Leaders of the APC stakeholders forum include; Special Adviser to President Muhammadu Buhari on Political Matters, Senator Babafemi Ojudu, Senator Dayo Adeyeye ; Senator Tony Adeniyi ; former speaker, Honourable Adewale Omirin; former House of Representatives member, Honourable Bimbo Daramola, Bola Tinubu’s in-law, Oyetunji Ojo, Mr Gbamgboye Adegoroye, Mr Femi Adeleye and other followers from the 16 local government areas of the state.

Feelers, however, showed that the stakeholders’ forum was strategising towards presenting a consensus aspirant, especially against a likely contestant from the governor’s camp. While there is no decision yet from the camp, it is believed that Senator Adeyeye might be contesting for the governor’s seat again, like he did in 2018. He is from the Ekiti South senatorial district.

On the hand, the opposition PDP in the state is in a deep crisis that has polarized it into two factions. The dramatis personae are former Governor Fayose, and Senator Biodun Olujimi. The factions have parallel executives from ward to the state level and all efforts by the PDP national leadership to resolve the crisis have failed. As it stands, the issues arising from the congresses conducted by the party have shifted to the courtroom as both parties await the pronouncement of the Court of Appeal in the appeal by the Olujimi’s group challenging the outcome of the elections.  Will the imminent court verdict bring an to end the agitation of which of the factions is authentic? While many believe the decision of the court might not end the crisis, others are of the view that either of the factions will be willing to seek compromise when the decision of the court goes against them.