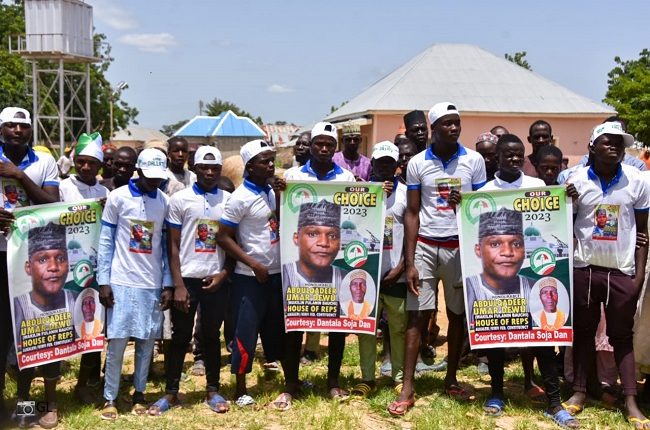 There was a massive defection of members of the ruling All Progressives Congress (APC) which is in opposition in Bauchi State to the Peoples Democratic Party (PDP) which is in power.

The new members were officially received and welcomed into the party by the SSA, Domestic Affairs to the State Governor, Sen Bala Abdulkadir Mohammed, Abubakar Adamu Barde during a ceremony held in Duguri district over the weekend.

The SSA to the Governor led other stakeholders from Alkaleri and Kirfi Local Government Areas to receive hundreds of decamped members from the APC to the PDP.

Leaders of the APC members said that they decided to dump the APC in order to support the re-election efforts of Governor Bala Mohammed as their son who has executed many developmental projects in all the nooks and crannies of the local government and Duguri district in particular.

They pledged to support the Governor for the success of the PDP at all levels in the 2023 General elections.

Mohammed told the mammoth crowd that Governor Bala Mohammed as their son has done excellently well in the last three years of his stewardship and that as people who benefited immensely from many laudable projects they must set the pace for other people to emulate.

I Am Healthy, Fit To Serve Nigerians ― Tinubu

Two-term Lagos State Governor and Presidential candidate of the All Progressives Congress (APC),  Senator Bola Ahmed Tinubu,  has said he is physically fit for the rigour of the Presidency…….

Special Adviser to the President, Ease of Doing Business/PEBEC Secretary, Dr Jumoke Oduwole, at the weekend, disclosed that state governments will start accessing the World Bank’s $750 million facility by December 2022..…