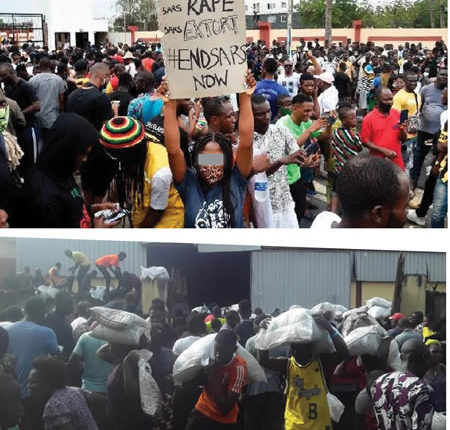 THE #EndSARS campaign engulfed the country for over two weeks before it was hijacked by individuals who unleashed mayhem on Lagos and a number of cities in the country.  The campaign by young men and women across the country had been a colourful event with a number of activities including protest marches, prayer walks, vigils and parties shot through with clear messages against police brutality, especially the Special Anti-Robbery Squad (SARS), hence #EndSARS. Then, on Tuesday, October 20, the protesters at Lekki Toll Gate, the prime location for the protesters in Lagos, were visited by armed soldiers, and then policemen.  There were gunshots. Peaceful protesters were the targets. An unknown number of protesters were injured while there are ongoing inquisitions into the number of the dead

The reaction the following day was anarchic: there was violence, arson, prison break, and shop break-ins, stealing and general breakdown of law and order in certain parts of Lagos and major cities across the country. Curfews were imposed in Lagos, Edo, Plateau, Oyo, Abia  and Anambra  states while schools were closed in several other states. We call for calm as the process of healing commences across the country. We recognise that the pain, bitterness and anger being felt by victims of the mayhem and those families who have lost loved ones to police brutality and the violence that came from the fallout of the protest will remain for a while, perhaps a long while.

We appeal to everyone to allow peace to reign.  We take consolation in the fact that the protesters never advocated for violence. They called for a reform of the criminal justice system, so that the process would be promotive of the right of the individual and be fair to both citizens and the police.  They even called for a better pay for the police. Indeed, they sought for a Nigeria that every citizen will be proud of, a Nigeria where justice would reign and the rights of citizens would flourish.

We empathize with the protesters and call for dialogue to ensure that the demands they have tabled before the government and the proposals made by the government in response are reviewed for effective and meaningful action. The National Economic Council called for the establishment of state-based judicial panels of inquiry to receive and investigate complaints of police brutality or related extra-judicial killings.  A number of states have set up judicial panels to investigate cases of human rights abuses by the disbanded SARS. We urge these panels to carry out their assignments with diligence and dispatch. They should ensure that they give victims fair hearing and ensure that perpetrators of violence do not escape the arm of the law.

Furthermore, President Muhammadu Buhari in his speech expressed pain over the loss of lives. “I am indeed deeply pained that innocent lives have been lost,” he said. He committed to carrying out extensive police reforms, in addition to the disbanding of SARS. He also promised to “continue to improve good governance and our democratic process, including through sustained engagement.” He appealed that the protests be discontinued. We join the president in appealing for calm.

However, the issues raised by the protests must not be papered over. Governments at all levels must play their parts to see the reforms through. They must ensure that the reforms include a monitoring process that can arrest any degeneration in future to prevent crisis. The Federal Government needs to ensure that the Special Weapons and Tactics (SWAT) unit does not revive the crimes of SARS. The intelligence capacity of the police and other agencies should be strengthened.

We commiserate with all those who lost loved ones during the protests, and those who lost their businesses. We urge all state governments to kick-start the process of compensating victims. In this regard, it is salutary that the Lagos State government has begun the process. On its part, the Federal Government must assist the affected states to get back to business and normalcy. It must adopt a conciliatory tone and show empathy and fellow feeling. It must lead the way to peace.

Let there be peace in the land, please.

Six steps to change your life

Lekki: The story of Bashorun Gaa