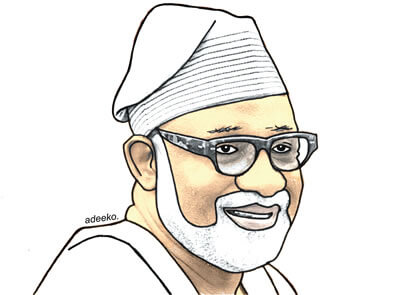 I have taken a cursory examination of unfolding developments and I admire the guts of the governor of Ondo State, Oluwarotimi Akeredolu (SAN), and his leadership skill. While I agree this moment calls for utmost sobriety and humility, the sublime characteristic of leadership is expedient. I admonish you and your unwavering teaming supporters to remain firm, resolute and strong.

A man destined for victory and success cannot but experience the tempting furnace. The moment is usually for men with balls, not boys without liver. Like you always walk tall even during onslaught, I see you wriggle out the manner a snake would escape the entanglement of ants. While it is commonly said that ants in their numerous numbers could cluster to crush an elephant, you are not the elephant to be crushed. Indeed, you are a stallion and in fact, a lion. The strength of a lion is not intimidating; he goes about other animals in friendship and cordiality, but fear of the unknown grips the heart of other animals around him. He’s not known to display how strong or energetic, other animals fret and dread the king of the jungle.

Akeredolu is that oasis with alluring fragrance. Everyone likes the scent and flock around him without conscience, claiming otherwise and demonstrating rebellion. Your case is one similar with the animal farm where reality has become expedient and the exigencies for believability arisen. The strife will be over when men finally part ways with the boys. Indeed, the struggle for power has united adversaries.

Leadership is riddled in all the distraction, confusion, crisis and conflict. It is only normal if you pledged achieve success for the common people whom you oath to serve for your wish and desire to leave behind legacies not to concern feudal interests.

Even at our own little level as youths in leadership while in the university, we had characters whose only business  based on personal interests. I experienced it, I saw it but in all, we conquered and triumphed. You will triumph!

I have seen people accuse your family of intervention in governance, bringing your immediate family to public harassment, insulting your better half and denigrating the sanctity of your union only because you won election against people who are unrelenting, unforgiving and merciless; Those who think power is their exclusive right.

It must be the people that decide who leads them and not a few select political elites. I understand, however, that crisis and conflict are normal ingredients for which a man must transcend the mendacity of material thoughts; We must elevate our thinking caps to see beyond selfish moves often demonstrated by few if not infinitesimal but acclaimed powerful men in the society. It is a battle for and against these people however small the number is. We must unite to support Akeredolu regardless of turnouts in scorecard. Even when influenced to oust the incumbent as speculated, we the people must unite to support him

It is our character in Ondo State to remain bold, strong and courageous. We are unusually resilient in our belief system, our values and virtues are intertwined to think legacies while in government. We had this with Pa. Adekunle Ajasin of blessed memory, late Adebayo Adefarati equally left impacts while alive Dr. Olusegun Agagu, however brief, also left imprints Governor Olusegun Mimiko, by an undisputed and uninterrupted eight-year tenure, equally left behind certain medical infrastructural legacies.

Today, Akeredolu is confined and serenaded with crisis and needless conflict within his party structure, the system of governance and in fact, his now estranged trusted allies. They have all jointly and severally set him up for public opprobrium so the people would get distracted, deterred and obviously, deceived. We shall, in our little corners expose any such attempts. Noteworthy is the fact that angels do not exist anywhere and no promissory note will undo reality.

As it is today, the only sincere and assured reality we have would not cost much is the continuity of Akeredolu. Many have asked me what I see in a man that barely knows my existence, I say loudly and consciously that I owe myself a thankless duty to always stand by the truth and ensure humanity triumphs. Conspiracy theories are normal.

For a family where the governor has raised children who are well trained and educated with a wife so exposed to initiate a nongovernmental organisation of international standard even before getting into office, I do not expect less trials, tribulations and travails.

Indeed, affliction will rise. The way out of this entanglement is constant moral support from right thinking individuals who must place our collective interest and wellbeing above personal political chase for power.

The All Progressives Congress as a party must weigh its collateral damage should they act otherwise. Governance is delivery; the leadership must examine and ascertain this and give assurances. It shouldn’t be about funds not voted into personal office to service followers as claimed by typical politicians. No, it should rather be the people first while patronage comes after.

The governor has exhibited and demonstrated leadership. Indeed, he has proven beyond doubt and on the preponderance of evidence that leadership is serious business. The time has come for youth in Ondo State who understand and know their onions to rise unanimously to entrench good leadership. This is the moment to rescue Ondo State from perpetual succession in traditional leadership.

After Akeredolu, we anticipate and look towards the direction of young minds consolidating his efforts (because he will have his eight years like Mimiko) to avoid alterations and encourage consistency in governance and leadership. Let no politics of self deter our committed spirit from telling well-meaning Nigerians and APC, even the international community, what leadership our people deserve.

It is a great disservice to attempt changing narratives. Our youths must rise to stampede shenanigans or any act contrary to our peaceful political co-existence. Akeredolu is an asset to APC and not a liability as some presume. It is more wins to APC with Aketi.

All Nigerians Should Get Tested For COVID-19  – PTF
The Presidential Task Force on COVID-19 has recommended testing of all Nigerians as a way to track the prevalence of coronavirus infection and understand how to tackle it… Read Full Story
Staff Retrenchment: NDDC IMC Snubs Senate Panel
The cold war between the Interim Management Committee (IMC) of the Niger Delta Development Commission (NDDC) and the Senate Committee on Niger Delta Affairs took a new twist on Monday as the management of the Federal government intervention agency declined appearance before the latter… Read Full Story
We’ll Rid Oyo State Of ‘One Million Boys,’ Other Nuisances ? Operation Burst DG
He said a sporadic shootout with the One Million Boys gang occurred when men of Operation Burst moved in to rescue the victim who was kidnapped by the gang and kept in an abandoned building in the area… Read Full Story
75 Groups Condemn NBMA’s Plan To Release Genetically Engineered Mosquitoes In Nigeria
Over 75 concerned civil society organisations and environment groups in Nigeria and outside have condemned the plans to introduce Genetically Modified mosquitoes into Nigeria… Read Full Story
COVID-19: Osun Govt Eases Lockdown In 4 LGAs
The Osun government has approved easing of lockdown imposed on four local government areas in the state to contain the spread of coronavirus… Read Full Story
It’s Premature To Reopen Schools —ASUP
The Academic Staff Union of Polytechnics (ASUP) has warned against the plan by some state governments to reopen schools, saying that any attempt at reopening schools at any level within this period is premature… Read Full Story
Okerete: Oyo’s Forgotten Goldmine
It was around 4:30 pm. We had just finished observing missed solat (prayer) after arriving Saki, Oke-Ogun’s commercial nerve centre, from Ibadan. It was a 140-kilometre journey. We had stopped over at Iseyin, the gateway to Oke-Ogun from Ibadan and Oyo, to eat a meal made from cassava flour… Read Full Story
EDITORIAL: The Explosion At NNPC
LAST week, the Nigerian National Petroleum Corporation (NNPC) reported an explosion at its Benin River Valve Oil Mining Lease OML 40 operated by the Nigerian Petroleum Development Company (NPDC), its subsidiary, on behalf of the NPDC/ ELEREST joint venture. According to the NNPC spokesman… Read Full Story
NDDC And The Undertakers
I am angry and indeed outraged, after watching the video clip of Mrs Joy Nuineh, the former head of the Interim Management Committee of the Niger-Delta Development Commission, NDDC, on the monumental corruption going on in that organisation that was set up to be an interventionist agency for the development of… Read Full Story