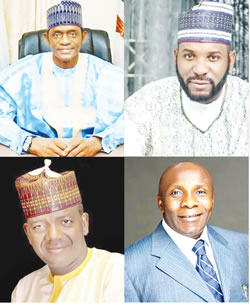 IMOLEAYO OYEDEYI examines the latest twist in the crisis bedeviling the All Progressives Congress (APC) and the many thorns on the ruling party’s path to its 2022 national convention.

With the All Progressives Congress (APC) still grappling with the deluge of grievances that trailed its ward and local government congresses as well as the 35 petitions it got from 12 states of the federation in the aftermath of the state congresses it held on October 16, 2021, the crisis plaguing the ruling party took a new twist on Monday, November 29 when a factional Caretaker Committee under leadership of Prince Mustapha Audu emerged and purportedly disbanded the Governor Mai Mala Buni-led Caretaker Extraordinary Convention Planning Committee (CECPC).

The Audu-led factional committee, set up by one of the ruling party’s support groups, the Progressive Youth Movement (PYM), had premised its action on the fact that the Buni-led caretaker committee had overstayed its welcome to conduct a national convention for the party.

The group and several other critics of the Buni-led caretaker committee contended that the ruling party is worse off than it was when Adams Oshiomhole was at the helm.

The verbal war against Buni CECPC

They said despite the fact that Buni leading the CECPC as a state governor contravenes Article 17(4) of the APC 2014 Constitution (as amended) and Section 183 of the 1999 Constitution, it has become obvious to all discerning party men and women that the CECPC cannot fix the problems it met on ground as it daily looks more like the Buni-led committee is only creating more problems for the party instead of resolving the ones it met on ground.

Audu, who installed himself as the leader of the APC factional committee also explained that the sack of the Buni-led committee was aimed at correcting the ills in the party.

“We are aware of the plethora of issues within the party, our party has had a history of shying away from true reconciliation and in many cases inflicting chastisement on members that should have been rewarded for their effort towards building the APC.

“It is clear that in the last couple of years, the party has been on a regressive course and it is necessary for all well-meaning party members to roll up our sleeves and do the needful to ensure that we correct the mistakes that have been made to ensure victory in 2023 for all stakeholders.

“As we move closer to the election year, let us join hands and strengthen internal democracy in our party and show Nigerians that we have what it takes and we deserve their votes in 2023.”

But in its swift response, the Buni-led committee, in a statement by its secretary, John Akpanudoedehe, described the Audu’s group action as “the felonious activities of a purported group,” calling for the arrest of the group members for treasonable felony.

The Buni-led committee’s statement said Audu and his supporters are unknown to the party and its structure as a registered support group and are therefore non-existent.

“However laughable, the criminal attempt of the purported group to usurp the leadership of the President MuhammaduBuhari-led APC now borders on treasonable felony.

“Relevant security bodies must now check and address their unscrupulous activities. The attention the purported group seeks will not be given to them by the party.

“We can only advise that the general public completely disregard them. They are not registered members of the APC and are being used by opposition elements and fifth columnists to cause confusion.”

The swift knock from Kogi

Barely 72 hours later, the APC in Ogbonicha Ward of Ofu LGA of Kogi State issued a statement at the party’s secretariat in Lokoja, disowning Audu over his inability to revalidate his membership during the 2021 registration exercise.

The chairman of the APC in the ward, Honourable Peter Onoja, claimed that Audu, the son of a former governor in the state, had abandoned the party since he was disqualified from the governorship primaries of 2019.

The party subsequently dissociated itself from the activities of Audu and his group, describing the Kogi politician as being alien to the party at the Ward level, even as it accused him of unruly behavior and conduct.

Debunking Onoja’s claim, Audu while speaking with newsmen in Lokoja recently, said there was no time he abandoned the party nor engaged in any anti-party activities saying it was a lie concocted to discredit him and the new movement.

Audu who also discredited the allegation that he did not make himself available for the APC revalidation of membership made available to newsmen pictures of where he went to do the revalidation exercise in his Ogbonicha ward.

He said: “They are just telling lies to try to discredit us. Anytime someone speaks up for young people they peddle false allegations”

Showing newsmen, “Here are the pictures from my membership revalidation.

“This is me signing and thumb-printing the register, this is with Senator AkpanUdodehe who says our group is unknown, and so you can clearly see from the above that if you want the right thing to be done then they will lay false allegations against you.

“In addition, I paid N22.5 million for a governorship form in 2019. Why didn’t they reject it and say I wasn’t a member then?” he queried.

Meanwhile, in what can be said to be in total solidarity with the order of the Buni-led committee calling for the arrest of Audu and his group, the Kogi politician was on Friday allegedly invited by the Department of State Service (DSS) much to the displeasure of his teeming youthful supporters.

The supporters under the APC Rebirth Group, condemned Audu’s DSS invitation and questioned his purported suspension from the party at his ward.

“At what point did Prince Audu cease to be a member of the APC? Could this be before he paid the sum of N22.5 million to the coffers of the party to contest the governorship primaries of the APC in Kogi State, or after he decided to speak against the continuous stay in office of the CECPC or their refusal to conduct the national convention of the party, especially within the time frame given to her?” the group protested.

“For the leadership of the APC to take this position against a group it has interfaced with at various times, so much as disowning their leader, Prince Mustapha Audu who was recently a governorship aspirant under the platform of the party, one only imagines how seriously those superintending over the affairs of the party takes their responsibility,” the group further said in a statement.

But as the war rages on between the Audu youthful faction and the Buni-led “elderly” faction of the ruling party, the question on the lips of many political observers is whether the APC will be able to achieve stability and hold a rancour-free convention in February, 2022 as solid grounds to retain power in 2023. Even as there are fears that the slated date for the convention may be shifted again, another key question is what implication does the ruling party’s festering crisis pose to the survival of Nigerian multi-coloured politics.

Reacting to this in an interview with Sunday Tribune, a professor of Comparative Politics at the Kampala International University, Uganda, Professor LanreOluAdeyemi, said: “The youth forum has just demonstrated the ever restive nature of younger folks at getting things done as early as yesterday!

“Nothing has delayed APC convention this long other than enlightened self-interest of older politicians who have always been in the saddle of power and authority. With the ‘sack’ of Governor Buni and his co-travellers, the APC may not remain the same especially as it prepares for the February convention.

“Also, the whole drama signals the preparedness of the youths to take huge risk as long as they want to make potent statement. The older folks in the party who could be easily intimidated by EFCC and other security agencies over alleged corruption at one point or the other can never attempt what the youths did.

He stressed that “going forward, the APC chieftains must give adequate space for the youths to operate else the ruling elites risk losing everything in the power play come February convention.

In his own submission, another professor of Political Science at the Ekiti State University, Ado Ekiti, Bonnie Ayodele, said: “Politics is all about intrigues, compromises, negotiation and renegotiation. It is also about trade-off; it even allows for belligerent and dissenting views. The action of Audu-led youth group is not uncommon. They are also seeking for relevance within the party machinery. Their actions cannot in a way invalidate the Buni-led committee because the youth wing or faction cannot constitute the central working committee as its statutory function is limited by other superior statutory body.

According to Ayodele, “while their action could be a wakeup call for the party’s hierarchy to get its act together because rival PDP has had its convention, everything is just another reflection of intra party squabble, which is not new; it is just a storm in a tea cup.

“The fact that February 2022 has been picked for its national convention is a good response to the crisis. The second angle of the question is about the youth’s involvement in politics and the chances of having a rancor-free convention. Here, the youth remain active in politics and as far as I am concerned, they are hardly marginalised irrespective of not too young to run law.”

Ayodele said while the recent intra-party war did signal a good omen for politics in the country, “the youth in a bid to wrest power from their older political counterparts must be creative, inventive and innovative to be recognised. There is no organisation that does not value creative resource of its men. The truth is that they must show more creativity that is uncommon.”

But with the invitation sent by DSS to Audu being the latest twist in the crisis in the ruling party, the tense atmosphere among its members indicates that more troubles lie ahead should the gladiators fail to navigate the troubled sea with tact and diplomacy.

Direct primaries: Why NASS should have allowed political parties to make their own decisions —Ayodele