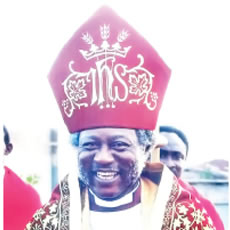 Archbishop of Ibadan Ecclesiastical Province, Church of Nigeria (Anglican Communion) and the Bishop of Ibadan-North Diocese, Most Reverend (Dr) Segun Okubadejo, in this interview with SEYI SOKOYA, speaks on the hiccups in Nigerian Churches; identifies Nigeria’s problems and proffers solutions with his new intellectual work.

An archbishop recently proposed that tithes should be deducted directly from peoples’ salaries. As a church leader, what is your take on this?

A lot of people, especially those of us in the sacred ministry have been exploiting the people in this matter of tithes and first fruits and you know you can always find passages in the Bible to back it up wrongly. You know, like when Satan was tempting Jesus, he was quoting from the Bible too. It is there in the Bible, but that was not what God was saying. So, the same thing with this tithe thing. It is not something that you have to force anybody to do, you only need to explain the importance of tithe. Is God going to eat the food or what? No, it is, just for the structural development, evangelism, and so forth. That is what we use all this money for, we say it is God’s money. Yes, but we don’t send it to God. It is used for the propagation of His gospel. There are many tithes unacceptable! The scripture says when you see your people hungry and you neglect them all in the name of paying tithes; whether tithe first fruit, or whatever name given to it, it is unacceptable to God, when you are doing this at the expense of taking care of the needy. God sees your heart the way you think of giving it out. If a thief goes to a church to give a tithe, is that acceptable? Of course not!

So, we should not force people to do these things, it should be a free thing for people to do. For example, the way I do my tithe: I give some to the church and beggars. I have a particular beggar that I must give the sum of  ₦1,000 to every Monday instead of giving him something else because I pass and he is always there Monday morning. I am sure it is acceptable because God sees my mind. That is the most important thing; the mind that you used to give whatever tithe or offering or whatever it is. For me, I see mounting pressure on tithing as a means of exploiting people. The best we church leaders should do is to teach its importance.

Recently a foreign evangelist Daniel Kolenda and his gospel team held a crusade in Ibadan, but we noticed that the Anglican Church was exempted, why?

I cannot speak generally. But I have my reasons for not attending. I got a letter from the organisers to provide 100 of my clerics to join the crusade and 100 of my members to come and serve as ushers and other things. Do you know why I am discouraged?  Because when Reinhard Bonke came the other time, number one, the Bibles they brought to us which was supposed to be given freely we’re being sold; even pastors were involved in the selling of the Bibles. I attended twice, they were fighting over offerings too. I just saw it as a jamboree and I decided that personally, this is not the kind of crusade I want. The most important thing is the salvation of souls. Once you can get people to confess faith, other things follow. The main thing for crusades is to get people on the right track.

Is that the reason why your members  didn’t take part in the crusade?

So, I understand the fact that you said salvation should be the major thing but what I also noticed in this crusade was that they played up the healing miracle aspect.

The Church has tried so much to ensure that the country is at peace through prayers, and advice to the government at all levels, but it seems all efforts are not yielding results. Is there any other approach the church or church leaders can take in ensuring Nigeria experiences absolute resolution?

Christianity is not a religion of force and all God has asked us to do is to be beacons of light; that is what Christianity is all about because they have shown us what is expected of us, to do good and listen to one another and so on. Ours is said to be the voice of the nation, to say it when there is anything that is not going the way it is supposed to go. Like we have in the book of Revelations when Jesus was talking about the seven churches, He said, after talking against those who have ears should hear what the spirit is saying. Talk about it and speak against what is not right, talk about justice, talk about peace, frown on injustice, and so on. We have all this in the Bible. And the same scripture said we must obey those in the authority. We will not repent from speaking the truth. It is left for those who have ears to hear, while we continue hammering it and pray that God will touch the hearts of these people someday.

The presentation of your new book entitled, ‘Waste of Grace’ is around the corner, could you let us know what brought about the title?

Nigeria is a blessed country; even amidst all that is going on, we have heard of other countries, who don’t even have as many problems as we have yet, in every way, human and natural resources. God has blessed this country and that is grace. God also has raised people, especially religious leaders to speak against injustice and put the government on the right track; this is another grace. But for 23 years now that we have been talking to the nation nothing is still happening. This is just obvious that Nigeria is wasting God’s grace upon it. This is why I have written a book that will open both the government and the people to our problem and at the same time proffer solutions. It is time we stopped wasting all this grace as a country. We have wasted the grace God has given Nigeria so much. We are like the prodigal child, but with Nigeria, we don’t think of returning, we’ve gone the wrong way and that is why we’ve been repeating the same thing to the government and the people in general.

We can only hope, and trust God that He will touch the hearts of all and sundry through this intellectual work. It costs a lot to publish, but that is not the concern; I want every Nigerian both the high and the mighty and even the masses to have a feel of the book as it will open the eye of many to the right things. It will also be useful for generations unborn. This is my fourth book and it will be presented on December 16. I  am confident that it will impact lives positively.

You are retiring from active service soon, how do you feel about this?

It had been an interesting journey and I thank God for how far he has brought me from the scratch to the top of the service of God. My years in the ministry are not in vain and I bless God for the grace to submit myself to the service of God from life as an unbeliever and a smoker to a respected cleric.