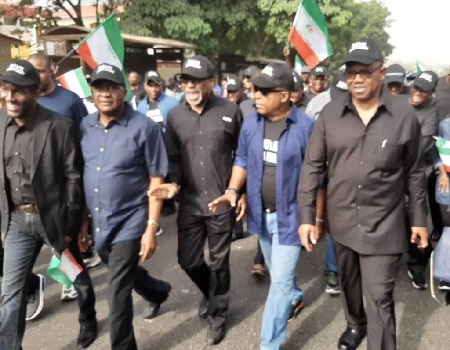 The planned demonstration by the Peoples Democratic Party (PDP) has commenced in Abuja with the National Chairman of the party, Prince Uche Secondus and former Anambra State Governor, Peter Obi leading other party chieftains.

The protest was called, among others, to show displeasure over the Supreme Court’s judgement voiding the election of Emeka Ihedioha of the PDP as the Imo State Governor.

Also present in the protest are the Minority Leader of the Senate, Enyinnaya Abaribe. former Imo State Governor, Achike Udenwa, former Minister of Aviation, Osita Chidoka among others.

The demonstration, which took off from Legacy House, Maitama, is expected to be taken through some major streets in the nation’s capital.