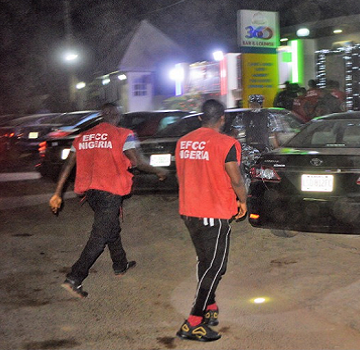 According to the acting Head, Media and Publicity and spokesperson of the EFCC, Tony Orilade, in a statement issued on Monday, said Club 360, “is notorious” for harbouring internet fraudsters on that axis of Ibadan.

He also submitted that the Commission had been monitoring activities at the club in recent time with a surveillance team.

ALSO READ: Two to die by hanging for murder in Osun

According to Orilade: “In preparation for the late-night operation, officers of the commission had carried out series of discreet surveillance on the nature of activities going on in the nightclub which, according to intelligence, was notorious for harboring suspected internet fraudsters.

“The raid also led to the confiscation of scores of vehicles, laptops, sophisticated phones and other items.”

Orilade then informed that the “suspects are undergoing further interrogation.”