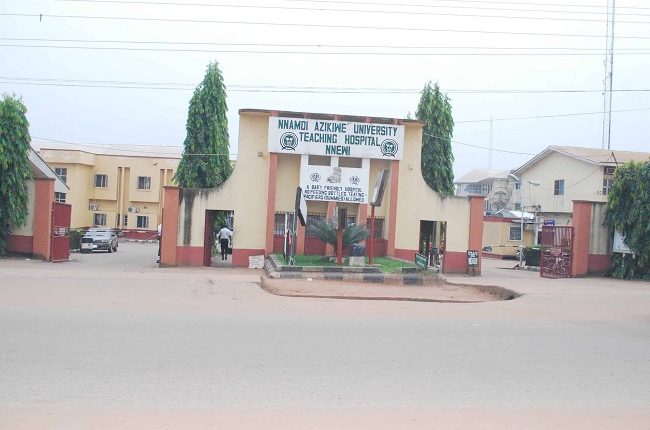 The ceremony, which took place at the temporary site of the hospital in Nnewi was witnessed by the chairman of the hospital board, Chief Izekiel Iramiya; represented by a staff of the hospital, Mrs Rosemary Okeighazi; Deputy CMAC, Dr Ugochukwu Ezejiofor; Head of Corporate Affairs, Mrs Chinyelu Onwuka; Head of Accounts, Mrs V.C Nduka; Head of Works, Mrs Pamela Ohanaja; among others.

Speaking at the event, the outgoing chief medical director said Dr Ugbaja being his direct deputy was taking over from him in an acting capacity.

Dr Ugbaja in an interaction with journalists after the handing over ceremony described the task an enormous responsibility, adding that he would give all to make it work.

“It is an enormous responsibility, but we are not afraid. Because we have been in the management level in the past seven years. But we need the support of all; because we cannot do it alone.

“As we go into work, we have three cardinal agenda: Infrastructural development, staff training and acquisition of equipment. This administration would apply public/private model in driving the affairs of the hospital since the government cannot do it alone. Our vision is to rank as the top five teaching hospitals in Nigeria.

“NAUTH must be transformed. The staff must sit up. The public outcry against the hospital is not without a basis and we have come to a stage where its either you sit up and do your duties very well or you leave the system. Our patients deserve quality attention.

“Its the duty of all of us to ensure that this hospital stands out in the country. All the stakeholders need to come together to develop the hospital,” the acting CMD stressed.

Dr. Ugboaja said further that are a lot of opportunities for collaboration utilizing the Public-Private Partnership (PPP) platform which is a win-win situation for both the institution and the investor.

He encouraged corporate organizations and individuals who are interested in partnering with the hospital to come along.