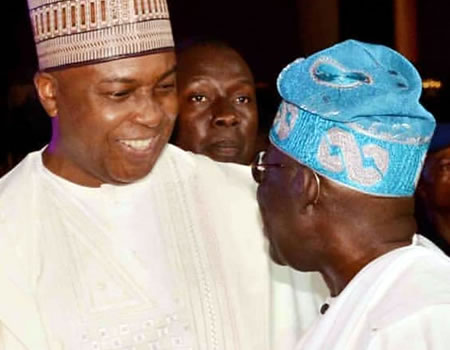 Shagaya’s birthday celebration had come and gone, interestingly, it left some people with memories and encounters that became the talk of town. For Kwara politician and the former Senate President, Dr Bukola Saraki, it was his first major outing after his failed attempt to return to the National Assembly and he sure had a good time.

The former Senate President was accompanied by his wife, Toyin and immediately they stepped into the venue, Saraki became the centre of attraction. He strolled from one table to the other exchanging pleasantries with friends and political associates that exhibited their joy to see him. His movement to the table of Asiwaju Bola Tinubu and other APC stalwarts created some ripples with photographers falling on each other to capture the moment. Saraki chatted and laughed with Asiwaju Tinubu for some minutes, the encounter was one of the highlights of the party.

Another figure, whose attendance was also noticed was the first son of former President, General Ibrahim Babangida, Mohammed. The quiet businessman, who had not been seen at public functions came to represent his family, who are long friends of Hajia Bola Shagaya.

Mohammed paid a special tribute to the celebrant, who he described as hard working as he revealed the bond his family shares with the successful businesswoman.