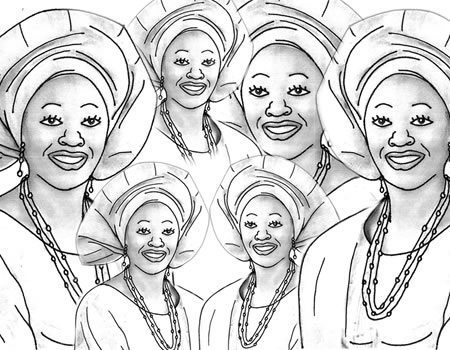 MY charge is to women all over the globe who by the grace of God have weathered the  storms of life and overcome the challenges brought by the COVID-19 pandemic in 2020.

The Almighty God deserves the praises and adoration of all women in the universe as  they celebrate the International Women’s Day 2021. This celebration should be a  moment of reflection on how to regain the lost core values of the society. Women should  map out strategies that will steer children and youths today towards  embracing what a good society should hold dearly. Values are “standards of behaviour, beliefs about what is right and wrong, and what is  important in life.” It is very sad that the sound moral values of the society which the  young people of today should reflect have been eroded. They have established a  completely different set of values and expectations contrary to the foundation of a good  society. The saying that there is dignity in hard work has no meaning to many of them.

Their utmost desire is to ride the latest cars, build magnificent houses and eat the best  delicacies at all cost and by ‘any means’. The values of respect, honesty, chastity, and  obedience are considered outdated. Many children disregard the injunction in the Holy  Book that they should obey their parents in all things. They have no regard for  constituted authorities and the laws of the land. The elders in the society, both male and  female, have a duty to bring our children and youths back to the path of rectitude but our  emphasis today is on women. What then can women do to stem the tide of moral  decadence among children who have jettisoned the core values of the society?

The falling standards in our educational standards and values, compared with what obtains  in other countries, are appalling. It is disheartening to learn that some unscrupulous parents  get involved in examination malpractices by procuring fake results for the children or  doing other criminal acts to secure admissions for their children in higher educational  institutions. Since education starts from the cradle and the role of mothers in this respect  is unquantifiable, it is our plea that mothers should not relent nor be reticent, but be  proactive. They can achieve a lot in the first instance by being role models worthy of  emulation; and secondly, by exposing the children to sound home training. Women over the years have been held in high esteem as the custodians of cultural values at home and in  society. They also serve as primary caregivers and have been placed in unique and  strategic positions to inculcate social religious values, cultural norms, and moral  standards of the family and society in children. I believe that women should play a dominant role in inculcating the values of honesty and  transparency in children. Women should go the extra mile to do this. Honesty, they say, is  “the soul of business”. If we cherish honesty and practise it, it will eliminate fraudulent  practices in the offices, 419 syndromes, Yahoo-Yahoo boys, and other vices.

It is sad that the corrupted aspects of foreign cultures have eroded many of our highly  respectable African norms, particularly regarding decent dressing and hairstyle among  males and females. Some African men have been negatively impacted as they adorn  hairstyles that portray them as irresponsible. Indecent dressing, like other social menaces  start from the home before reaching the society. Women as critical stakeholders in the  home have a responsibility together with men in the training of children to ensure they  imbibe the good old traditional values that have served for ages as the bedrock of the moral fibre of our society. Moral decadence in the mode of interaction between the male and female genders is also  an area of concern. The increase in the incidence of rape and defilement among innocent females as being reported on various social media platforms daily is devastating.  Perpetrators and victims of rape do not come from the air; they are raised at home! Women must train their male children to respect the dignity of girls and women who are  just like their sisters, daughters and mothers in their biological make-up.

The war against  rape is a real war that must be waged frontally at home and outside it. Mothers must stand up, mobilise and galvanise support for the eradication or elimination of the social menace of rape that is threatening, devaluing, diminishing, relegating, and staining the integrity of womanhood worldwide.

In addition to public protests, women and mothers should be role models of chastity to  young female children; women should insist on decent dressing by young girls and  proper conduct by their male counterparts. Necessary laws consistent with fundamental  human rights must be enacted. Women’s groups should rise and demand law reform that  will seek to abolish the usual “snail speed” procedure which characterises the prosecution of rape and defilement cases in court as “Justice delayed they say is justice denied.”It  is also desirable to call for the imposition of stiffer penalties on convicted persons. We  consider the roles of women to be significant and we admonish them to unite and speak with  one voice on how to end rape on this occasion of the commemoration of the  International Women’s Day. It is possible to end rape which has become unpalatable  daily item on the news media. It is high time the women groups began to work towards a  practical solution.

A woman’s role in the home is a social contribution in itself and can easily be the most  effective way to instil moral values in children. The job of a woman in the home is  comparable to that of a teacher. In fact, a mother is often a child’s first teacher. A teacher  inculcates values in students and shapes their character, thus setting up an  uninterrupted claim of responsibility and virtue. This will, in turn, strengthen the moral  foundation of the home and engender development and peace in the society. In conclusion, women are performing unique duties and occupying strategic positions  where they can inculcate in children social-religious values, cultural norms, and moral  standards in the family and community. Throughout the world, women have enjoyed a  kind of exposure hitherto unknown, in history and this alone is enough for womenfolk to  inculcate cultural core values for good governance all over the world. The social and  spiritual roles of women in the home, church, and society over the years cannot be  relegated to the background.