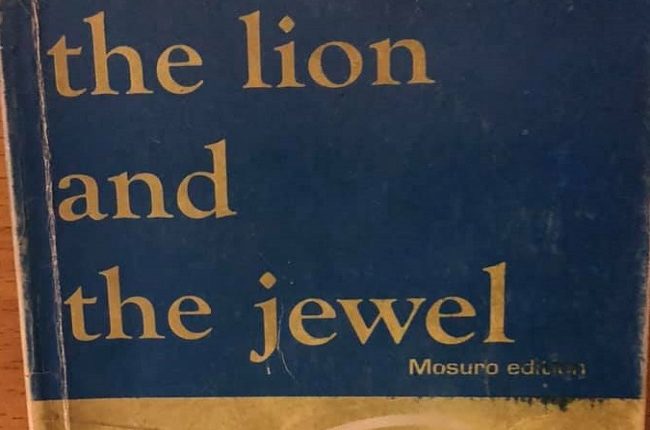 This literary work of art is a play written by a playwright and the 1986 winner of the Nobel prize for Literature, Professor Wole Soyinka. The play is said to be first performed in 1959 and published in 1963. It has been recommended and studied as a literary text by students of literature in secondary and tertiary institutions.

It is a play that exposes the reality of the clashes that exist between the traditional culture and the effect of Westernization in the African race, most especially in an environment that is populated with formally educated people, culturally-inclined learned people and the ‘illiterates’.

The choice of Soyinka to make use of symbolism, flashback, metaphoric elements and humour to narrate the contest between Baroka, a village head and Lakunle, a school teacher over the love they both have for a village belle, which they have chosen to express differently based on their exposure makes the work of art a perfect description of a reality check.

Soyinka portrays Lakunle, a 23-year-old man as one who is conflicted with the reality of his culture and the idea of Westernisation. Lakunle professes his love to Sidi in foreign ways (kissing and all sorts), which Sidi often finds uncouth and abominable. Lakunle is not of the opinion that dowry has to be paid on Sidi before he gets married to her. He believes the idea of brideprice is barbaric, ignorant and archaic.

“An ignoble custom, infamous, ignominious shaming our heritage before the world.” (P7)

“To pay price would be to buy a heifer off the market stall. You would be my chattel, my mere property.”  (P8)

Lakunle gives it all to educate Sidi on formal ways to do things, which Sidi hardly gets a full comprehension of the correction.

Lakunle: No. I have told you not to carry loads on your head. But you are as stubborn as an illiterate goat. It is bad for the spine. And it shortens your neck, so that very soon you will have no neck at all. Do you wish to look squashed like my pupils’ drawings?

Sidi: Why should that worry me? Haven’t you sworn that my looks do not affect your love? Yesterday, dragging your knees in the dust you said, Sidi if you were crooked or fat, and your skin was scaly like a…

Lakunle, who in no way revers royalty, just to get Sidi marry him, often speak ill of Baroka, the village chief, who he sees as a contender. (Pp 16 & 23)

Soyinka makes use of the elements of drums, dance and performance, which is often seen as our heritage as our culture. (P14)

Baroka, the village chief is portrayed as someone who showcases some of the characteristics of a village head in the Yoruba nation of the African race. One of which is having Sadiku, the last wife of the erstwhile village head being betrothed to him. Another one is having a lot of women as much as he wishes, either as wives or concubines. He, being an elderly person who is culturally inclined and influential in his stead eventually succeeds to have Sidi to himself as his wife

Sidi, the titular jewel, who Soyinka describes as being slim with plaited hair and a true village belle (P1) shows the pride she has for her beauty, especially, when a photographer got her picture published in a magazine, part of which got Baroka attracted to her (P20). She finds the Westernized way of showing love as being rude and unhealthy, which itself rates the African way of showing love over theirs (P9). She is being made to describe the essence of the appraisal given to virginity in our culture and how the concept of dowry is attached to it (Pp 7 & 8), which Lakunle loses her for.

The character of Sadiku shows the reality of what the Yorubas call ALARINA or intermediary and what the elderly ones do to get the attention of other people for any of themselves. Sadiku, even though, being the eldest wife in the palace, is being portrayed as one who persuades Sidi to marry the village chief (Pp 19-26).

Soyinka uses this play to emphasize on the need to resuscitate the dying values, customs and norms of the black man as against the glorification of the Western culture, hence, making Baroka marry Sidi and not Lakunle.