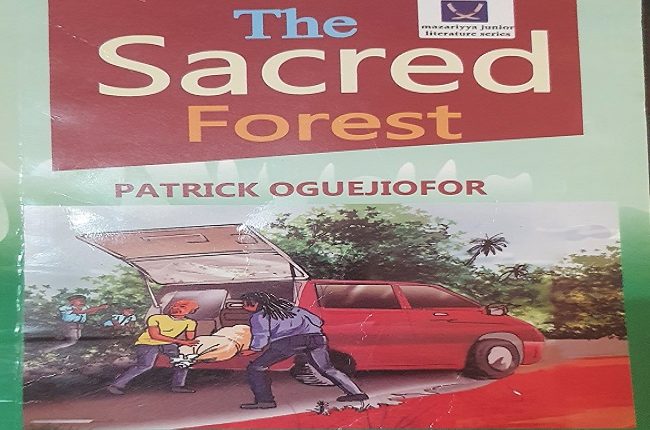 The 97-page book (The Sacred Forest) authored by Patrick Tagbo Oguejio tells a story of a young man named Ike from Obeledu-Onu who lived with his sister and two other brothers. At the beginning of the story, Ike’s father, Samuel Okesola, died mysteriously in a forest. This death brought sorrow to the family because Ike’s mother was just a housewife as his late father was the breadwinner.

Nevertheless, preparation for their father’s burial began in earnest but they ran into a hitch. All the money meant for the widow Achalougo, who is Ike’s mother, to take care of the children and herself was taken by their uncle Uche.

Regrettably, Uncle Uche took away all the wealth left behind by their father, a situation that left the family in poverty, as they go to bed many times without dinner.

Meanwhile, Ike felt unbelievably bad when his mother, Madam Achalougo asked him to go and leave with her cousin, Adaogu in Umuodogwu. He, however, cheered up after realizing that the famous Umuodogwu festival took place every year in the town.

On arrival in Umuodogwu, he was received by his aunt, Adaogu who sold Beer, Palm wine and other alcoholic beverages in a shop in front of the house. He met two girls older than him Ngozi and Nkiruka who were about age 13.

As a barren, Adaogu never had her own child, but she took care of other people’s children for the sake of God. Ike became friends with Ifeanyi who had lost her mother after her birth. Adaogu then took care of him and never told him about his real parents. Adaogu enrolled Ike at the same Umuodogwu Community school with Ifeanyi.

On a daily basis, the duo of Ike and Ifeanyi went to the Sacred Forest to take a glance at the goddess Odogwu and hunt for animals like squirrels, rats, and birds. One day, it was late in the night and Ike told Ifeanyi it would be better to go home now. When they were about getting home, they heard voices from the front of the shrine where the Odogwu was placed.

They sighted notorious thieves in the person of both Mike and Egbudu who was planning to steal the Odogwu. They ran home and came back to the place to confirm the goddess was stolen from the shrine. They were relieved when they discovered that Odogwu was still intact in its location.

Two weeks before the Umuodogwu Festival, the Odogwu statue was stolen from the shrines. The boys quickly reported to Adaogu the incident that happened previously at the shrine.

They later informed the Igwe of the community who reported to the police. As the police declared the suspects wanted, Ifeanyi and Ike later saw them smoking weed at the border area with Nnewi.

Even though Ike and Ifeanyi were threatened by the criminal not go disclose their hideouts, the two young boys took the courage and reported to their aunt and the king. The police surrounded the hideout and caught the thieves while trying to escape with three other accomplices.

After investigation, it was discovered that the criminals were hired by an Italian businessman who traded in artefacts. They were later jailed. During the festival, the Igwe gave the brave boys N50’000 each and their parents N500’000 each where they then lived happily thereafter.

MORAL: No condition is permanent. One should have faith and always be trustworthy