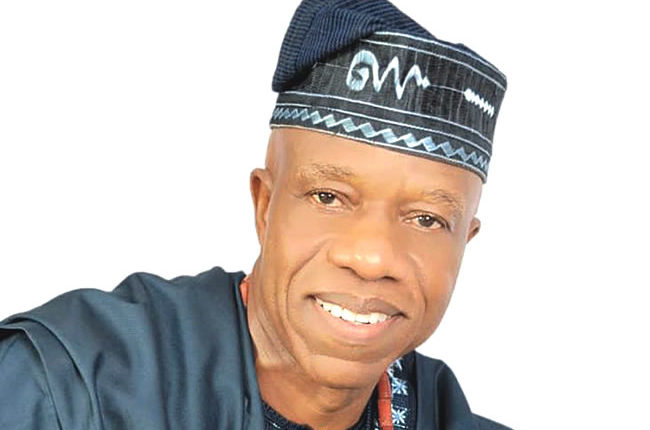 Martins Kunle Olateru-Olagbegi is an aspirant of the Action Democratic Party (ADP) in the forthcoming governorship election in Ondo State. He speaks with HAKEEM GBADAMOSI on the preparedness of the party ahead of the election.

YOUR party is regarded as one of the oppositions with little or no record of giving stiff opposition in the state. What are your plans in the forthcoming governorship election?

Our party is a great party, though relatively new. But we are well grounded. It is formed on right ideologies with fresh ideas from like-minds. Some may think we are not to be reckoned with because we don’t parade some purportedly big names in the nation’s politics or recycle some old names and old hands who had almost lost their relevance. Permit me to say that the two leading parties can be described in the words of the late Chief Bola Ige as two fingers of the same leprous hand.

They are the same people who just crisscross to either of the divides to realise their selfish ambition with reckless abandon. You can mention several people who are in the ruling party today that were formerly calling shots in the main opposition party. And we can see the trend again. It was too obvious in the recently concluded party primaries in Edo State where the two parties practically exchanged aspirants.

In the ADP, we are unique. We are not known for the hullabaloo and political cacophony of the two leading parties.

However, we are poised to take over from the ruling All Progressives Congress (APC) starting from the Ondo election. We are meticulous in our strategy. We do not just feature candidates to mark register on the election date. We do our underground works and know where we are capable of winning and present candidates in such places. We pulled surprise in Oyo in a free and fair election. We won in Osun in the last poll, but we were robbed in day light. We have garnered all it takes to oust the incumbent government of APC in Ondo State. The people have tested the two parties and are fed up with them. Don’t forget that Ondo State people are highly lettered and we can’t be fooled for this long. I, Martin Kunle Olateru-Olagbegi, am the darling bride of the electorate in Ondo State today, because they know I will bring all my experience to bear and bring about restoration in major areas of the state’s economy.

Looking at your antecedents, you have a rich profile but your platform is not known. How do you want to see yourself and the party if eventually you emerge as your party’s choice?

To say my platform is not known is not a fair assessment of the political climate in Ondo State in recent time. Even at that, I am known to the people. They share in my aspirations and come October this year, the people will speak with one voice through the ballot paper to send the incumbent governor packing. I understand that what people called being on ground is the political gyrations and noise making. That is not politics and I am not used to it.

Ours is politics of idea and ideologies. We have our blueprint ready only to be endorsed by the electorate before we hit the ground running. I am sure that very soon, Ondo State shall be the model for others to follow.

Are you sure your platform is ready to hijack power from the incumbent, considering the silence from your camp?

We are not silent and we are also not known for rabblerousing. We are systematic. We have penetrated the 18 local government areas engaging the people with issue-based politics and they are solidly behind us. The noise makers are banking on old and stale information and it will soon dawn on them.