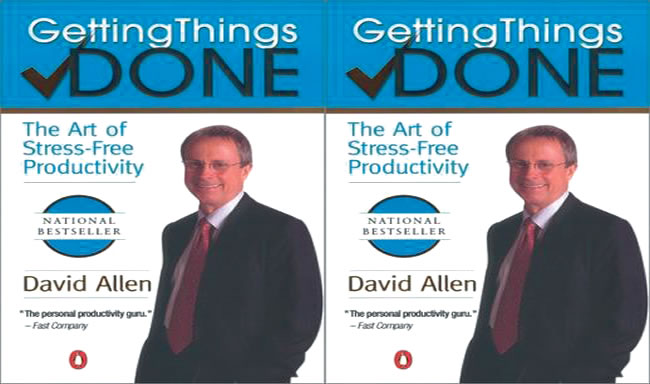 Almost 15 years after it was first published, David Allen’s book, Getting Things Done (GTD), remains an entrepreneur’s bible. The guru’s methods behind the international franchise of workshops and one-on-one coaching aimed at reducing mental and physical clutter are as relevant, if not more so today. The original book has been updated to reflect and address some of the biggest contemporary challenges to productivity: emails, multi-tasking and action items that never make it off the to-do list.

I recently spoke with Allen to get his take on the most valuable tools for entrepreneurs and how to use his popular system to achieve them. One of the biggest mistakes we all make, Allen says, is thinking we need more time than we actually do.

Allen creates that space through techniques designed to simplify, rather than over-complicate. GTD is best known for the Two-Minute Rule: if a task crosses your desk that can be completed in two minutes – do it immediately. If not, file it according to context, and priority level. The idea is simple: dealing with it right away clears the desk quickly. Setting it aside demands looking at it again, reviewing, re-thinking, assigning a time to get it done; all of a sudden a short task takes on far more time and importance than it’s worth. The other benefit, Allen says, is sharpening decision-making skills. Determining rapidly whether we can accomplish something in under two minutes forces us to make a call. Honing the ability to instantly assess a situation and move on is not only practical, but crucial to starting a business.

Entrepreneurs, Allen says, aren’t necessarily different to the rest of us, except for the speed of recalibration with which they need to do things, especially if they’re doing it while holding down a day job.

Again, Allen points to the important role space plays in allowing entrepreneurs to maintain perspective. That’s where his well-known Weekly Review comes in. Amidst the flurry of meetings, spreadsheets, business plans, networking and everything else squeezed into the 24/7, Allen says it’s the best way to re-balance priorities.

“How do you keep perspective when you’re trying to handle all these new things? The necessity to constantly keep that stuff out of your head and build some sort of regular review process is critical to be able to regroup on at least a weekly basis. If you’re not doing a thorough, consistent weekly review to clear your mind of everything you have to do, it’s not working. That’s part of the backbone of entrepreneurial tools.”

That regrouping, allows for shifting focus, and ensuring tasks are aligned with priorities, especially since the real world changes faster than our to-do lists. It’s also a valuable mechanism for transferring all of those little notes gathered over the previous week, physical and the mental ones, to a master list. In the process, some things inevitably fall away, clearing room for others.

“Execution is the hottest button out there right now, especially for startups. Most VCs have to trust you have three things – intellectual safety, i.e. protected material and content, sufficient capital, and the ability to execute your plans. Anecdotally, VCs I’ve talked to say execution is the thing that kills most entrepreneurs and startups – the inability to follow through on or execute all the things they’ve dreamt up.”

Allen’s patented methodology hasn’t changed much, but with the increasingly blurred lines between work and play, and marketplaces moving faster and faster, GTD has become even more relevant. An entrepreneur’s ability to balance long hours with time off to avoid burn out is a skill, but Allen warns, it’s all about clearing the headspace. “The ultimate criterion is, what do I have to do to get this off my mind?” The answer, he preaches, will either be – do it, delegate or delete, but always, always get it out of your head, and onto the list.