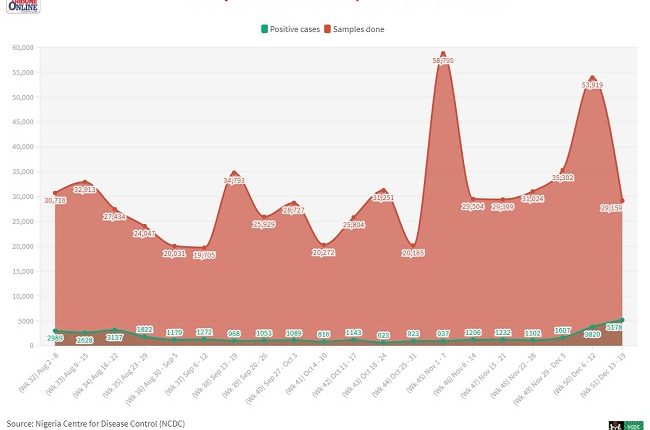 Also, the 1,145 cases reported on Thursday, December 17 is the highest daily figure of confirmed cases since the pandemic broke out in February.

Last week, which marked the 51st week since the beginning of the pandemic in Nigeria in February, only 874,617 samples have been tested. 77,933 cases have been confirmed, 67,784 recoveries and 1,218 deaths were recorded.

According to the data sourced from the Nigeria Centre for Disease Control (NCDC), 29,159 tests were conducted last week, currently; there are only 8,931 active cases in Nigeria.

The Presidential Taskforce on the COVID-19 pandemic, during last briefing, affirmed that Nigeria has entered the second wave of infections, bringing with it the risk of losing the gains from the national response.

The chairman, Boss Mustapha, said: “In Nigeria, the indication is that we have entered the second wave of infections and we stand the risk of not just losing the gains from the hard work of the last nine months but also not losing the precious lives of our citizens.

“The PTF believes that if we do the right things, adhere to the NPIs and step up our testing and detection, loss of lives will be minimised and the rising curve will begin to flatten out.”

Tribune Online analysis also showed that there was an increase in the number of COVID-19 patients discharged and deaths recorded last week.

1,934 people recovered and were discharged last week; this shows an increase when compared to the 1,207 persons of the previous week.

Also, Nigeria recorded 24 deaths last week, an increase compared to the 14 deaths of the previous week.

On Sunday, 418 new cases of COVID-19 were reported in the country, bringing the total number of confirmed cases to 73,175.

On Monday, 201 new cases of the pandemic were reported in the country, taking the total to 73,374.

On Wednesday, 930 new cases of COVID-19 were reported in the country.

On Thursday, 1,145 new cases were reported in Nigeria.

On Friday, 806 new cases of the pandemic were recorded.

On Saturday, 920 new cases were reported in Nigeria, bringing the total number of confirmed cases to 77,933.

BREAKING: Biden sworn in as 46th US president