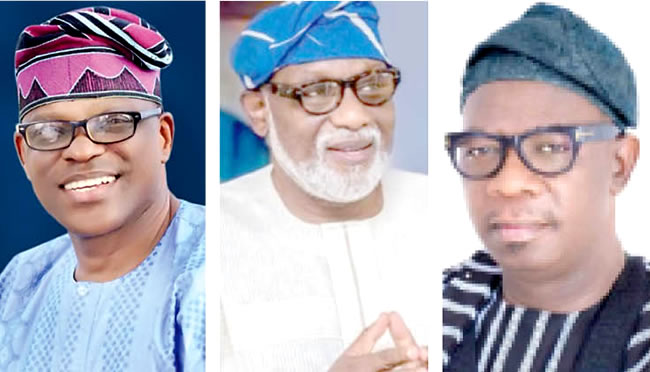 HAKEEM GBADAMOSI writes on the immediate and far-reaching implications of the outcome of the governorship poll held in Ondo State on October 10.

The re-election of Governor RotimiAkeredolu of the All Progressives Congress (APC) of Ondo State was not envisaged to be an easy one. This was because of the initial disaffection arising from the contest for APC ticket for the poll. Through deft moves and statesmanship, he succeeded in closing ranks with all the aggrieved camps after the conduct of the party primaries. Some observers add that the seeming solidarity he got from other major stakeholders of the APC who believed he deserved a second term in office having proved to be a worthy ambassador of the party in terms of good governance.

Akeredolu defeated his arch challenger, EyitayoJegede, the candidate of themain opposition Peoples Democratic Party (PDP) and his estrange deputy governor, AgboolaAjayi of the Zenith Labour Party (ZLP) by winning in 15 out of the 18 Local Government Areas in the state. Jegede won in the remaining three LGAs. Indeed, the election was an anti-climax to the tension and apprehension that preceded the election following the spectre of violence that characterised electioneering. While all the camps in the poll continue to take stock, with groups and individuals pre-occupied with analyses and observations on the conduct of the poll, the results is generally believed to have a number of immediate and long-term implications for both the major gladiators and their parties.

Winners of the election.

Some pundits had thought that the battle would be a straight fight between the governor and his deputy, Ajayi. Others were concerned about the implications of the governor not succeeding in his quest to renew his mandate. Others belonged to the school of thought that the election would renact part of the memories of the 2016 governorship poll that brought Akeredolu to office after defeating Jegede. Of course, there was yet another set of observers who said that the opposition had even made the contest easier for Akeredolu due to lack of consensus among the main challengers.Above all, despite all the distractions and hostilities from the camp of Ajayi, the governor was able to pull himself together and win the election. From all indications, Akeredolu looks set to operate an all-inclusive government as he is already stretching a hand of fellowship to all members of the APC, as well as politicians from other divides.

The party, which suffered a defeat in a similar poll held in Edo State about three weeks ago, proved some bookmakers wrong over their prediction of a bandwagon effect on Ondo election. Their opinion was that the  victory of Godwin Obasekiwould was the impetus that the PDP needed to upstage the APC government in neighbouringOndo. But the APC returned to the drawing board immediately after losing the Edo election to restrategise as the PDP basked in the euphoria of Obaseki’svictory. The efforts of the governor of Yobe State, who doubles as the chairman of the National Caretaker Committee of the APC, Mai Mala-Buni, contributed to the success story. His efforts on fence-mending contributed to the peaceful resolution of the pre and post-party primaries crises in the party and the outcome of the election.

In his capacity as the chairman of the APC National Campaign Council for Ondo election, the governor of Lagos State governor, Mr Babatunde Sanwo-Oluequally played a role in galvanising support for the ambition of Akeredolu. Though he talked less, many said his dft moves and contributions towards achieving the overall goal of the APC were remarkable. The outcome of the election is also said to be to the glory of an APC national leader, Chief Bola Tinubu.  This was notwithstanding the fact that he refrained from openly getting involved in the campaign. He reportedly contributed immensely in making sure that all aggrieved camps buried the hatchet after the conduct of party primaries.

They are regarded by many party faithful as the heroes of theOctober 10 election. The aspirants include:OlusolaOke, Segun Abraham, Isaac Kekemeke, Ife Oyedele, BukolaAdetula and host of others, who, had earlier threatened to work against Akeredolu’s re-election bid, eventually unanimously resolved to ensure victory for the party and Akeredoluat the poll. It will be recalled that their displeasure with the Akeredoluadministration contributed to the not-too-impressive results recorded by the party during the 2019 general election.

The independent National Electoral Commission (INEC) seems to be the biggest winner of this election. According to observers, the commission recorded a significant leap in its resolve to ensure a free and credible election in the country. There was a remarkable improvement in INEC’s management of election logistics and the overall conduct of the election, especially with the introduction of the Z-Pad. However, election observers believed that there is still room for improvement in subsequent elections.

In spite of the palpable fear over possible violence during the election, voters in the state came out in large numbers to cast their votes. In some places, voters arrived at polling booths as early as 6:30 am, one and half hours before polling. The turnout was impressive, while the people monitored their votes till the last minute.

Unlike in the past, many said that the law enforcement agents also remained neutral during the election. There were no reported cases of breach of professional conduct by security agents.

To some critics, the election has a lot of implications for the deputy governor of the state and ZLP candidate in the poll,  Ajayi. His defeat is seen by many a major upset in his chequered political career. The 52-year old parted ways with Akeredolu, dumped the ruling APC for PDP, contested its ticket but lost to Jegede. He quickly moved to clinch the ticket of ZLP. Now, he has lost his number two position.

DrOlusegun Mimiko served for two terms of eight years as the governor of the state. His candidate in the person of Jegede in the 2016 poll lost to Akeredolu. Though former governor was not on the ballot in the 2020 poll, his image loomed large in the ZLP. But his candidate was roundly defeated in the election. The campaign towards the election was bitter and full of accusations and counter-accusations. It pitched Mimiko against his friend, Akeredolu. The outcome of the poll is seen as having many implications for the political career of Mimiko. He had dumped the party after his tenure as the governor of the state in 2017. He was said to have rejected a proposed alliance offer from some leaders of PDP so as to brighten the chances Jegede.

For the second time, Akeredolu defeated Jegede on Octiber 10, in a seeming repeat of history. In 2016, Jegede was reportedly hindered by a court process that restrained him from campaigning until 48 hours to the election. But the situation was different this year. But there were speculations that the absence of genuine reconciliation after the party primaries contributed to upset at the poll. There was also the argument that it was not proper for power should shift to OndoCentral senatorial district after Mimiko had served two terms.

According to some pundits, the PDP may have lost an opportunity to re-launch itself to power and prepare the ground for subsequent elections in the country. The dream to reenact the Edo template fizzled out, ostensibly due to the fallouts of party primaries. It could not resolve the knotty issues that surrounded the choice of running mate for the election. The choice of GbolugaIkengboju, the lawmaker representing the Okitipupa /Irele federal constituency became a contentious matter.

The Oyo State governor, Seyi Makinde, was the arrowhead of the PDP during the November 2019 governorship poll in Kogi State. Again, he became the choice of the PDP in a similar capacity for the Ondo poll. As the chairman of the National Campaign Council for the PDP, he had the sole mandate of delivering the state to his party.

The view in some circles is that the ZLP may be heading towards extinction as it lacks real presence in most parts of the country. Many say they will not be surprised if the national leader of the party,  Mimiko, decides to navigate his way back to the PDP.

On the whole, the Ondo election has been won and lost, setting the stage for most camps with vested interest in the politics of the state already busy with permutations on subsequent elections and realignments of forces. Is it the end of an era for some political leaders and the birth of a new set of power brokers?