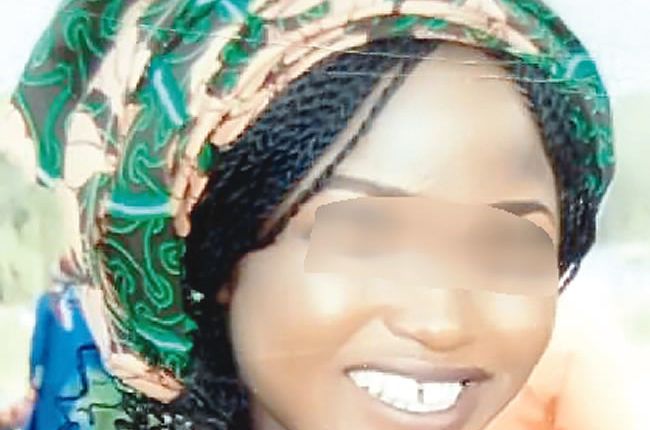 A few days ago, 20-year-old Patience Emmanuel Kushi, an undergraduate of the Bauchi State University, Gadau, was reported kidnapped by unknown persons. The young woman, who was living with her uncle, was said to be on her way to her father’s house when she was reportedly abducted at a location between Kafin Tafawa and Rafin Zurfi, two suburbs of the Bauchi metropolis. She was soon declared dead by her purported abductors, who reportedly reached out to her parents with no demand for a ransom.

But in a dramatic twist, a few days later, the ‘kidnap victim’ was found alive. And she had an unexpected story to tell. Patience, who was declared missing on June 24, upon her ‘miraculous’ reappearance on Thursday, said she had no choice but to stage her own abduction to escape her continued violation allegedly by her uncle.

The 100 level Pharmacology student tearfully recounted to newsmen how her uncle, with whom she had been living for about three years, attempted to rape her a second time.

Her story: “When he attempted to rape me a second time, I warned him to leave me alone. I told him, ‘it is either you kill me or I kill you and nothing else’. Then he left me alone. After this incident, I told my aunt, his wife, that I was going to my father’s house in Kafin Tafawa to pick up something. I boarded a Keke NAPEP. But when I got to the junction, a few steps away from the house, I became unconscious because of the trauma of the rape I had suffered earlier on. I found myself in Kari, along Bauchi-Potiskum Road, on Friday.

“When I finally came to, I found that I was lying on the ground in a bush, beside a hunter who had found me and was waiting for me to wake up. I asked him where I was and he told me that I was in Kari in Darazo Local Government Area (along Bauchi-Potiskum Road, about 130 kilometers away from the Bauchi metropolis). He gave me N2,000 for transport and I boarded a car to Azare, which was closer to Kari than Bauchi to pick up a few clothes in the hostel on our main campus.

“I left Azare for Bauchi on Sunday afternoon. That was 28th of June. As soon as I got close to my uncle’s house, I became overwhelmed with the trauma of him molesting me, so I told the Keke NAPEP guy to turn back and take me to the park. I had no particular destination in mind. From the park, I boarded a vehicle and went straight to Jos even though I didn’t know anybody there. On my way to Jos, I saw a woman in the vehicle who alighted at the Terminus area of Jos. I alighted with her. I asked her if she was living in Jos and she said yes. I lied to her that I was stranded because my money had been stolen. I pleaded with her to let me stay with her for the night, pending when money would be sent to me. In the night, the woman noticed that I went out to pick or make calls and she started suspecting that something was wrong. When I was asleep, she took my phone and from there, she noticed some calls I missed and which I refused to return. She called the numbers and spoke with my parents. She told them that I was in her house in Jos.”

According to Patience, she had to open up to the policeman that came with her father about how her uncle had raped her.

She said: “It was when my parents came to the woman’s house in Jos the next day with that same uncle of mine and some policemen that I told them that I ran away because my uncle had been molesting me sexually. When we got back to Bauchi, my uncle was detained at the police headquarters. He is still there.”

Asked about when and how her uncle raped her, Patience tearfully recalled that it happened about two weeks ago while she was sleeping in her room in his house in Rafin Zurfi.

“On that fateful day, he came into my room around 11.00 a.m., locked the door and forced himself on me. As this was going on, his wife was sitting right outside the house waiting for her son whom she had sent to the ATM. I shouted but nobody heard me. I hit him hard in the shoulder but that did not stop him from having his way with me. When his wife asked what had happened to his shoulder, he that he carried a heavy load that affected him. I could not tell anyone about what had happened because I felt nobody would believe me. I cried throughout that day.”

Wakili said: “On 30/06/2020, detectives attached to the anti-kidnapping unit of the Bauchi State police command, acting on a tip-off, had found Patience Emmanuel in Jos, Plateau State. Preliminary investigation revealed that Patience planned her fake abduction alert and decided to leave her uncle’s house owing to an unnatural act against her by her uncle, one Masoyi Ibrahim, aged 51, of Rafin Zurfi, Bauchi. Consequently, she could not continue to withstand as she claimed. Further details will be communicated when investigations are concluded.”

‘My wife slapped me, poured hot water on me ‘cos I told our daughter to stop bleaching, wearing trousers’