My 89-yr-old husband throws condoms he used on his girlfriends in my face, 60-yr-old wife tells court 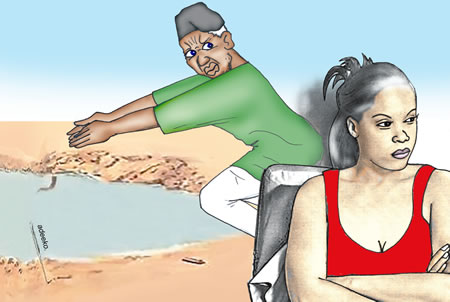 A 60-year-old Zambian woman, Astridah Bwale alleged that her 89-yr-old husband, Rodrick Mwale, had no respect for her and that he threw used condoms in her face when he came back from having sex with other women.

“My 89-yr-old husband throws the condoms that he uses on his girlfriend in my face and tells me that I am a worthless person,” she said.

According to the Zambia Observer, she testified that her 89-yr-old husband told her that she stinks and that there were beautiful women out there who were better than her.

She told the court that she never saw her husband’s salary and he does not buy food for the family.

Astridah alleged that Rodrick only spent money on his girlfriends.

The plaintiff narrated that her husband got his retirement package without her knowledge and that she had no idea how he used the money.

She also complained that Rodrick had in the last four years been sleeping at his girlfriend’s house and that it was the reason that they did not have sex.

The plaintiff also said that she and her family lived in a house without a roof due to the failure by the defendant to buy roofing sheets.

She told the court that she was willing to reconcile with her 89-yr-old husband as long as he agrees to go for an HIV test.

Problems between the couple who had nine children started in 1988 after her husband found a job.

Testifying earlier,  Rodrick told the court that problems in their marriage started in 2015 after his wife stopped washing for him.

He told the court that his wife also started starving him sexually and that the two have never had sex since 2015.

Ganerton senior presiding m a g i s t r a t e,  N s a m a  B a n d a reconciled the couple and ordered them to go for an HIV test.

Itching in my private part