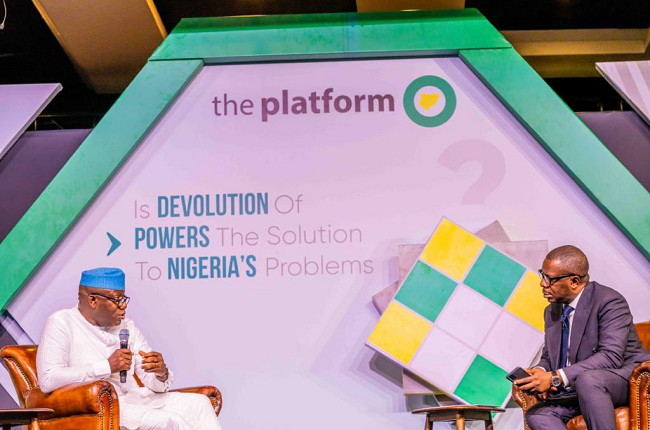 Chairman of the Nigeria Governors’ Forum and Ekiti State Governor, Dr Kayode Fayemi, has said insurgency declined in the country since the advent of the administration of President Muhammad Buhari in 2015.

The Former Minister of Minerals and Steel noted that Nigerians are yet to applaud the All Progressives Congress (APC) efforts at achieving its promises made in 2015 because of the existence of incessant insecurity crisis in the country.

Fayemi stated this in Lagos on Saturday at the 2021 edition of the annual conference, The Platform, organised by the Senior Pastor of the Covenant Christian Centre, Lagos, Poju Oyemade.

“Many may disagree, but I will argue that at least on insurgency – it may be a distinction without a difference – we have witnessed a decline.

“In 2015, we promised many things but with the greatest respect, I think the most attractive promise that people bought into that we made was integrity.

“You could argue that we have put in a lot of efforts in those areas, but have they earned the kudos of the citizens as they should? No, they haven’t because we still have insecurity in the land.

“In relation to the problem of insurgency, which was the most prominent in 2015 when we were coming in, remember UN House bombing, the churches that were burnt, Abuja was a no-go area and the North-East. But that problem witnessed a decline in the first four years of the Buhari administration.”

Also speaking at the event, an international legal scholar and consultant, Charles Omole, said the biggest challenge stalling the country’s progress is not the politicians but the civil servants.

Omole, who spoke on the theme of the programme ‘Is Devolution of Powers the Solution to Nigeria’s Problem?’, noted that civil servants play a huge role in bringing about change in the country and wield power even more than a federal minister.

“Those who know how civil service works know that they can grind any system to a halt,” Omole said.

He lamented that many civil servants are against innovation and modernisation.

“Many of them oppose modernisation. They oppose innovation. They like things being done manually. I wonder why. How many of you know that constitutionally, no federal minister in this country can sign a contract to give you a job? How many of you understand that? It is the Permanent Secretary that does that.

“So how can a minister steal without the civil service? In fact, many times, it is the civil servants that teach the novice minster how to do it,” he said.

Baba Ijesha: Iyabo Ojo and I will get over this phase —Yomi Fabiyi

Fayemi fires back at Adeyeye, describes formation of SWAGA as misnomer