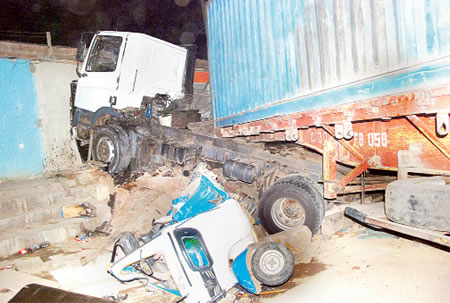 A multiple auto crash on the Benin-Lagos expressway at Ovia River near the Edo state capital of Benin during the weekend resulted in the death of four persons while three others who sustained serious injuries are presently on danger list at an undisclosed hospital in Benin.

The ghastly accident which involved two trucks and two smaller vehicles occurred when one of the trucks on top speed lost control and rammed into the other ill-fated vehicles, killing four persons on the spot and injuring three others.

With the ban on interstate travelling still in force as a result of the deadly coronavirus, the destination of the victims could not be ascertained.

The Edo State Commander of the Federal Road Safety Corps, Henry Benamaisia disclosed that four vehicles and seven persons were involved in the fatal auto crash.

According to Benamaisa, three persons died on the spot while one later died in the hospital where he was rushed for treatment along with the other victims who sustained different degrees of injuries.

The sector commander attributed the auto crash to overspeeding and dangerous driving, noting that most of the road accidents occurred as a result of over speeding and carelessness on the part of drivers.

He advised motorists to take precautions and maintain safe driving and speed and always bear in mind that there are other road users.