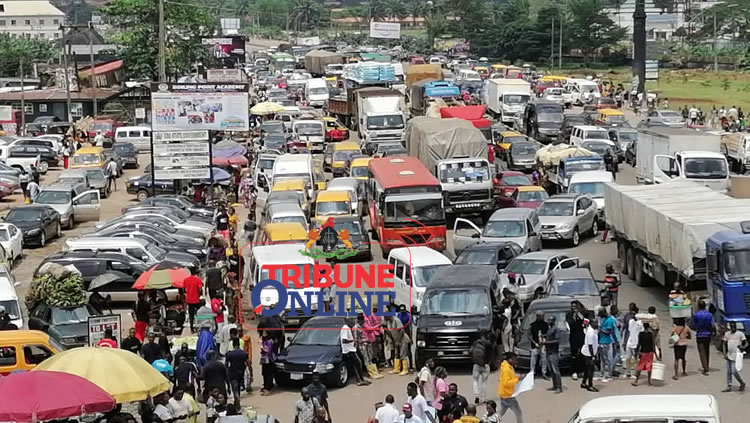 Thursday was a tough day for commuters on the ever-busy Ugbowo end of the Benin-Lagos expressway as youths under the aegis of the #ENDSARS protesters took over the road in continuation of the week-long nationwide movement against police brutality in the country.

The young protesters drawn from the students population from Ugbowo, Ekosodin, Edo Development Property Authority, EDPA and up to the University of Benin Teaching Hospital, UBTH, in their thousands blocked the highway, singing songs in derision of the police and the humongous salaries paid political office holders across the country.
The carnivalesque procession became more colourful as the young men and ladies made use of the newly constructed pedestrian flyover as podium while the DJ dished out revolutionary songs of the late Afrobeat maestro, Fela Kuti, that of his son, Femi Kuti and the ‘Nigeria jagajaga’ crooner, Idris Abdlukareem, from the juke box

Chieftains of the Thursday protest included members of the Students Union Government, SUG, of the University of Benin, UNIBEN, assumed the positions of coordinators of the protest aimed at bring comprehensive reforms to the police.

Policemen who were drafted to scene became mere spectators as the protesters conducted themselves peacefully for the almost five hours it lasted they stayed on the road.

Addressing the crowd intermittently, the President, of UNIBEN SUG, Comrade Egwu Benjamin said; “We are adding our voice to what has been happening across the country and we are demanding an end of SARS. We are saying end SARS and they are giving us SWAT. What we are saying is that we want police reforms. The government can do better; it should bring in more intellectuals into the police”

“More graduates and other intellectuals should come into the police, more persons will become interested. We were told Nigeria is the giant of Africa but now I can’t see our height. What we are saying is end SARS, end SWAT and give us a reformed police”, Egwu reiterated.

Also speaking in like manner, the SUG Public Relations Officer, Comrade Destiny Uanzekin said “This is a new generation and the beginning of a new order. It won’t just be end SARS now because our next point of call is the politicians”.

For the hours that the protest lasted, it was a complete gridlock and that forced some of the travellers to join the march in solidarity.

One of the travellers, who simply identified himself as Osarobo, said he had to join the protesters because he was consoled with the fact that “it is for the right course and I may be stranded right now but I am not frustrated because this is an overdue cry to reform the police force and not just SARS. Let police be well paid and see whether POS won’t stop on highways” .