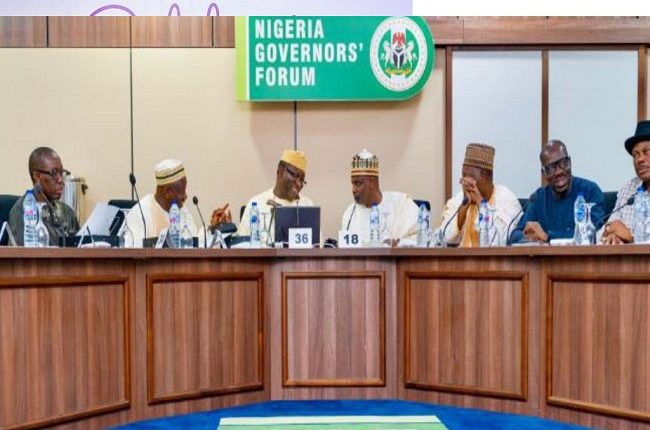 The 36 state governors under the aegis of Nigeria Governors’ Forum (NGF) have called on the Inspector General of Police (IGP), Adamu Mohammed Adamu to put on hold the creation of Special Weapons and Tactics (SWAT) Team and embark on wider consultation with Nigerians.

The resolution was contained in the communiqué issued after the meeting held with the IGP at the end of the NGF’s 19th teleconference meeting chaired by its chairman, Governor Kayode Fayemi of Ekiti State.

The governors who endorsed the ongoing plan to carry out far-reaching reforms geared towards greater effectiveness, accountability and transparency, however, described the creation of SWAT as ill-timed.

To this end, they urged the IGP to immediately convene a meeting of all stakeholders and agree on a format of engagement with all state officials in order to address concerns, adding that the state leadership should meet simultaneously nationwide, to address matters arising.

The communiqué read: “We, members of the Nigeria Governors’ Forum (NGF), at our meeting held today, 14th October 2020, deliberated on a number of issues affecting the country particularly the nationwide protests, riots and demonstrations against the activities of officials of the Federal Special Anti-Robbery Squad (FSARS) and the Nigerian Police.

“The Inspector-General of Police (IGP) Adamu Mohammed Adamu, briefed the Forum on protests against SARS which technically started since 2017. This would be the first time that the government is disbanding the unit.

“Following its dissolution, a new, strictly intelligence-driven Special Weapons and Tactics (SWAT) Team, will be constituted to carry out tactical operations across the 36 states of the Federation and the FCT.

“The IGP informed the Forum that after a psychological and medical evaluation, SWAT Officers will be trained and posted to all State Commands – about 50 per state, where they will operate only on intelligence-driven operation.

“They will not take part in routine operations but will operate specifically on intelligence after which they will return to their Commands.

“The IGP assured governors that he will leverage the provisions of the new Police Act 2020 to carry out extensive reforms within the Police and he pledged for the support, understanding and guidance of governors to embark on the new reforms.

“In response, the Forum acknowledged the concerns of many Nigerians especially youths that have been affected by the excesses of some officials of the Federal Special Anti-Robbery Squad (FSARS) and the Nigeria Police.

“This notwithstanding, Forum members noted the efforts of officials of FSARS in their states, as they have greatly assisted in containing the increasing spate of kidnapping, armed robbery, cattle rustling, and other high-end crimes particularly in the Northern states, where containing these criminal activities would have otherwise been very challenging.

“Members, therefore, expressed concern about the sweeping decision to scrap F-SARS even while acknowledging the need to address its excesses.

“After deliberation and extensive discussions, the governors were unanimous in their support for the IGP and endorsed his plan to carry out far-reaching reforms geared towards greater effectiveness, accountability and transparency.

“Members called for increased regularity in the meetings of the Nigeria Police Council in order for it to effectively carry out its regulatory and supervisory roles as contained in the Nigerian Constitution.

“On the IGP’s plan to create SWAT, governors stated that even though the effort might be necessary and in good faith, they argued that the timing is inauspicious as the mood of the nation negates it and may understandably be misinterpreted as a surreptitious move to dress F-SARS in another garb.

“Governors agreed that there was the need for greater consultation with the public before any decision is taken.

“Governors advised the IGP to immediately convene a meeting of all stakeholders and agree on a format of engagement with all state officials in order to address concerns; and that state leadership should meet simultaneously nationwide, to address matters arising.

“Governors emphasized that reforms must include the training and retraining of operatives on the rules of engagement with the general public.

“Policing in Nigeria must ensure freedom for all Nigerians to carry out their lawful and legitimate businesses anywhere in the country without fear of harassment, intimidation or molestation.

“Governors advised that throughout the reform process, the room for consultation may include sessions and direct feedback from the public, stressing that there is no single solution that applies to all the 36 states of the federation and the Federal Capital Territory.

“Governors were unequivocal that all police officers who participated in the abuse or actions that might have led to injury or the death of innocent citizens must be fished out and brought to book while other Nigerians who have been adversely affected by police brutality or other actions that were injurious to them or their loved ones, should be compensated.

“Each state is to set up a panel for compensation to all victims and see to it that the necessary compensation is made to those who deserve them. This must be systematically done to ensure that nobody who deserves to be compensated, is left out.

“The forum directed its secretariat to work with the police authority to develop a framework for setting up a panel of enquiry across all states to determine claims and compensation.

“Governors are aware that some states have already started engaging protesters and urged all states that have not commenced the same to invite all stakeholders in the matter to resolve these issues.

“Members also recommended that the IGP, the Police Service Commission and the Nigeria Police Council should immediately review the Remuneration and Emoluments of police officers and explore ways to fund this in order to incentivize and motivate police officers who have pledged themselves in service of the country.

“Governors enjoined the IGP to be ready to forge stronger partnerships with state governments and the civil society to improve civil relations between the Nigerian Police and the Nigerian Public.

“Members also agreed that the concerns of the public went beyond a need for Police/FSARS reforms and included a demand for better governance.

“They noted the need to engage, consult the public and take decisions that address the underpinning issues leading to the protests.

“Members noted that some states had already started the process of engaging protesters and urged all states to engage all stakeholders for a collectively agreed resolution.

“Finally, members praised Mr. President who has acknowledged that the protests and demonstrations reflect genuine concerns of many Nigerians and urged for a speedy implementation of all the agreed points,” the communiqué read.