5 things to know about the dissolution of SARS — Police 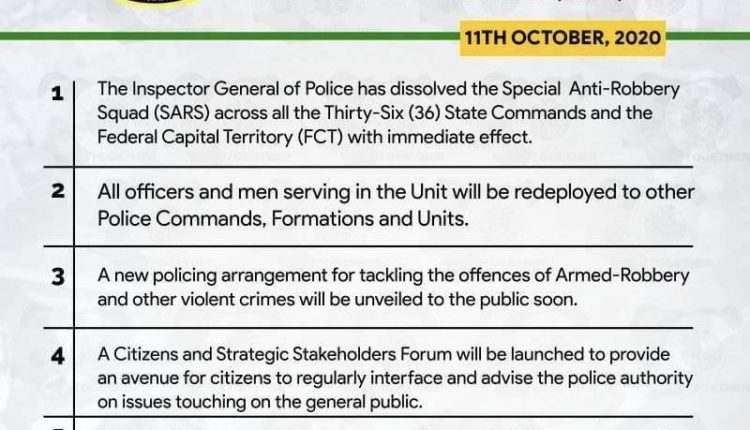 The Nigerian Police Force(NPF) have bowed to the pressure and demand of Nigerians to ban a unit of the force, Special Anti-Robbery Squad (SARS) on Sunday.

Recall that protests from youth have been ongoing across the states of the country and Nigerians in diaspora have also joined in the struggle to end the police unit, Special Anti-Robbery Squad (SARS).

Police have then highlighted the five major dissolution of the SARS unit as signed by the Force Public Relations Officer, DCP Frank Mba.

1. The Inspector General of Police has dissolved the Special Anti-Robbery Squad (SARS) across the 36 state commands and the federal capital territory.

2. All officers and men serving in the unit will be redeployed to other police commands, formations and units.

3. A new policing arrangement for tackling the offences of Armed Robbery and other violent crimes will be unveiled to the public soon.

4. A citizens and strategic stakeholders forum will be launched to provide an avenue for citizens to regularly interface and advise the police authority on issues touching on the general public.

5. To deal with the report of crimes committed against citizens, an investigative team will be constituted which will include Civil Society Organisations and culprits will be punished.

SARS has outlived its usefulness, lasting solution must be found ― Pastor Bakare

Sanwo-Olu moves to get justice for victims of SARS brutality